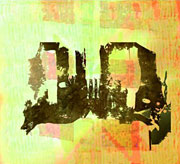 With unabashed distortion and boot-stomping authority, the Carney brothers that are Pontiak have created another intriguing twist on the high-powered rock they established on their first two albums, 2006’s Valley of Cats (QRO review) and 2007’s Sun On Sun (QRO review).

Their third album, Maker, has a more composed heartbeat than its predecessors, but the adrenaline is still palpable.  The churning opener, “Laywayed” has an almost haunted sound that immediately gives Maker its dark edge.  Soon after, “Wax Worship” is a maze of a song, with jagged guitars spatter in all angles, and a drum track that’s ominously unpredictable.  Continuing that theme, the swirling vocal harmonies on “Wild Knife Night Fight”and all-out fury of “Heat Pleasure” surely detail some aspects of hell.  But unlike previous releases, Maker has more eccentricities.  The thirteen-plus minute self-titled track sandwiched near the end is an ambitious take on the band’s repertoire.  “Seminal Shining” is a calm acoustic shuffle that might be the brothers’ most relaxed song yet. It’s clear they have abilities beyond the bone-crushing distortion that’s their signature sound.

Pontiak have always had a sharp edge to their bombastic, grungy sound, and Maker takes it to the next level.  As is passes more slowly than the others, this album gives the listener an opportunity to see in between the riffs into what fuels Pontiak’s music.

The Nerd Parade : Span of a Life