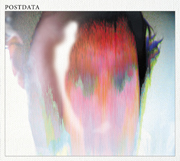 Wintersleep have always seemed a bit more than ‘just another indie-rock band’, and not because they’re from Nova Scotia (though that helps…).  There’s a certain honesty and evocation to their emotions, which other hipsters can’t quite access.  And apparently, singer/guitarist Paul Murphy has it in spades, because he and brother Michael have brought it to alt-folk in their side-project, Postdata.

Alt-folk from the more northern climes is less blues-influenced, more solitary and up close, even with the fellas, such as with Wisconsin native Justin Vernon (Bon Iver – QRO album review), and Halifax’s Murphy brothers follow in that trend on Postdata, starting with the sad, stripped beauty of opener "Lazarus".  While some touches are added here and there, like the transmission rhythm to "Tracers", strums of "In Chemicals" and "The Coroner", or darker harmonies in "Tobias Grey", there isn’t a lot of variety, and the record can start to feel a little one-note, such as the goes-on-too-long "Eclipse".  But Postdata is wisely kept at only nine tracks, under a half hour.

Postdata does have the feel of an intimate family side-project (like with the lyric about grandparents on "Lazarus"), but it strips away to reveal the authenticity at the core of Wintersleep.