Once again, the Primavera Sound organizers ensured maximum variety in the three days of festival.... 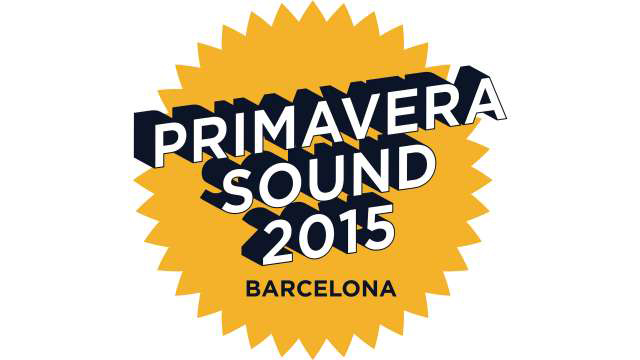 Once again, the Primavera Sound organizers ensured maximum variety in the three days of festival, Thursday to Saturday, May 28th to 30th, at the Parc del Fòrum in Barcelona, the main location since 2005. The eclectic choices made up for a rollercoaster of styles but it kept the festival’s main trait: to let you discover new music, whatever your preferences are.

From the previous days, in the clubs, parks and bars, we must talk about the gig OMD gave on Wednesday at the Fòrum itself. It gathered thousands of people (free attendance) but it was interesting to see how the veteran duo used that night to include many songs from the ‘90s era, instead of their first four records, the ones with the true gems in their repertoire. 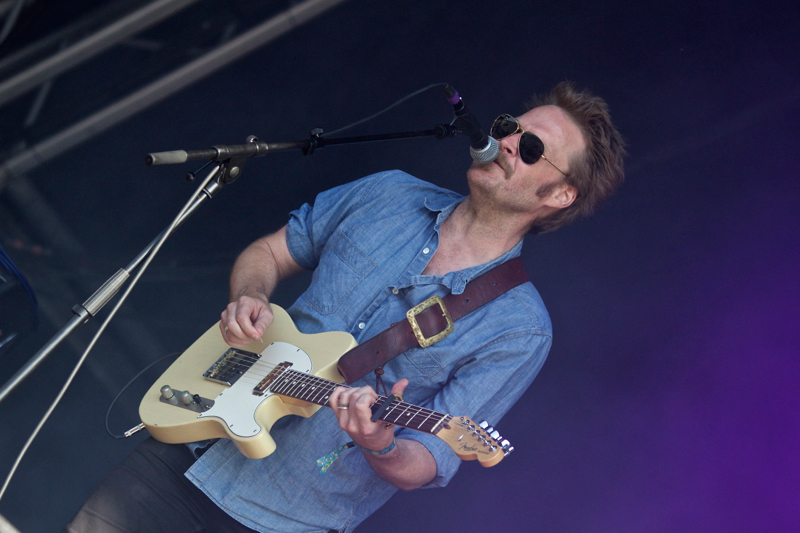 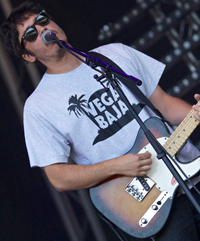 Murcians Perro opened the festival itself in the Ray-Ban Stage with their at times garrulous upbeat, up-tempo indie pop-rock. If people like Kimya Dawson or The Missing Leech (QRO live review) carry the flag of anti-folk, Perro carry the one of anti-hipsterism. Fun, refreshing and summery, they were an adequate first choice. Right after, Hiss Golden Messenger started in a somehow lukewarm way, but in just three songs we all discovered a band really comfortable onstage, effective and without cheap tricks. Their songs may take a while to sink in, but I think I’ll be listening to them in five years time, unlike, say, My Morning Jacket. 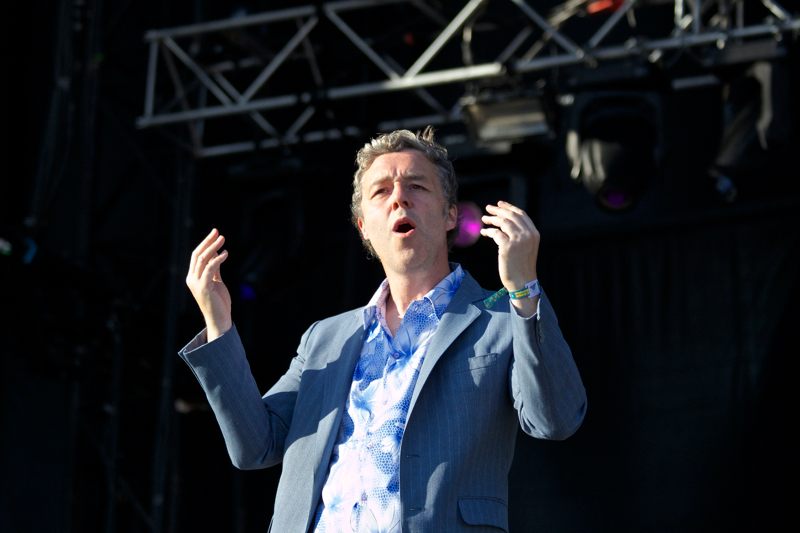 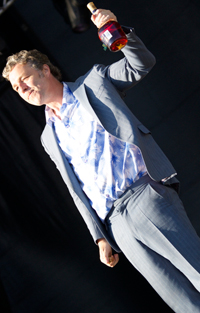 While waiting for Baxter Dury, Childhood offered a set filled with big stadium melodies, apt for just jump and sweat. Then Dury appeared, with the demeanour and the clothes of a cheap ‘70s gigolo, but with so much charm it was impossible to neither ignore him nor dislike him. Even though he was playing supporting his new record It’s a Pleasure and songs like “Palm Trees” really put all of us in the mood for summer, almost half the gig was devoted to older stuff, mainly songs from Happy Soup. Despite the problems and the lack of punch you feel in smaller venues, Dury’s still on the money, building a catalogue that’s already making him a cult pop classic.

Back to the old area of the PS, Giant Sand offered a soothing and calm repertoire while Viet Cong was doing really the opposite, with guitar thrashes somehow reminiscent of the neo-post punk revival of the last decade (worth a listen). Mikal Cronin proved to be a really solvent artisan of timeless pop arrangements, but at the same time, one of the main attractions, The Replacements really achieved their goal of making everybody move and resurrect some corpses, but one didn’t feel they were one of the stepping stones of U.S. indie, as they really are (or should be). 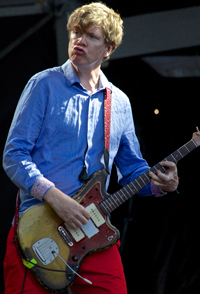 On the other hand, The Thurston Moore Band offered what we were expecting: an elongation of what Sonic Youth was. But with a twist. See, Lee Ranaldo started his post SY career with the excellent Between the Times and the Tides, a lesson on how to revive the 70s excellence. But with Last Night on Earth and last year’s appearance in the PS (QRO photos), he seemed to be only playing SY’s b-sides, reproducing cliché after cliché. But Moore, whereas he still has a very SY-related sound, he has decided to offer the most elaborate side to it, that side with melodies that take a while to develop and to display, creations that remind us to SY’s The Eternal (QRO review) or Washing Machine, but seen under the perspective of time. And it worked. 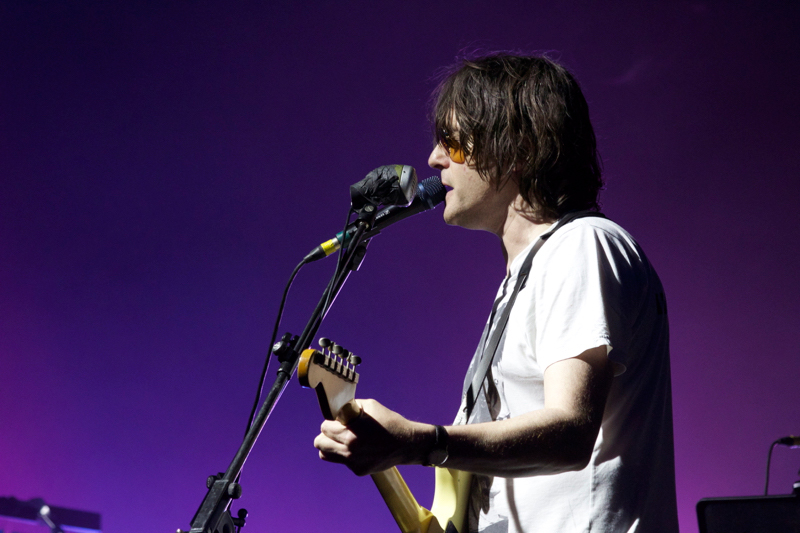 Spiritualized. The indie band that played souls offered, at times, an underwhelming concert. The gospel ballads seemed all to be the same one over and over again, and only the rocky songs and the endless drone of “Electric Mainline” really made sense.

And Sunn O))) made a gig à la Shellac: they always play the same but it always works. And it’s way funnier than Albini’s stuff, who am I gonna kid?

The second day of the PS 2015 was the psychedelic day. More or less. Just keep reading. 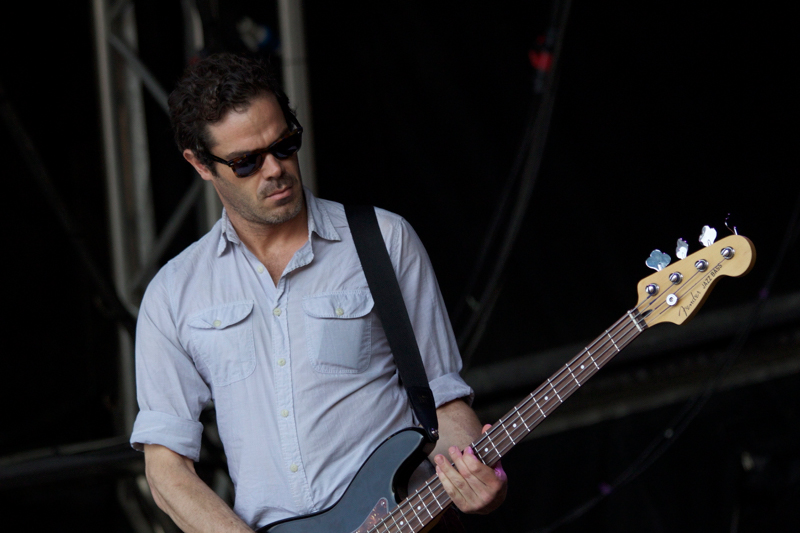 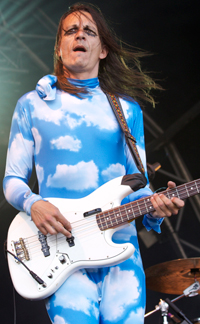 While the hipsters went to see José González at the auditorium (all reports suggest he, once again, gave an excellent gig), Disappears had the difficult task to start the day at the Ray-Ban Stage. Their dense hardcore, with noise tinges, would’ve worked way better at night, but they were one of the surprises of this PS. The other pleasant surprise was Fumaça Preta (Black Smoke, like when choosing a ‘Dark Pope’). A combo created in Amsterdam, maybe the herbs one can find in such a mediocre city were the glue that tied all the pieces of producer/drummer/singer Alex Figueira was looking for when he wanted to mix Os Mutantes with the Fuzztones and all sort of LATAM and North American influences. Colorful, contagious, delirious, their ‘70s rock is muddy and sweaty, excellent for a festival.

Ex Hex and The New Pornographers offered two correct sets, the former in their combative and clichéd riot girl style, the latters with their impeccable yet somehow lacklustre pop. 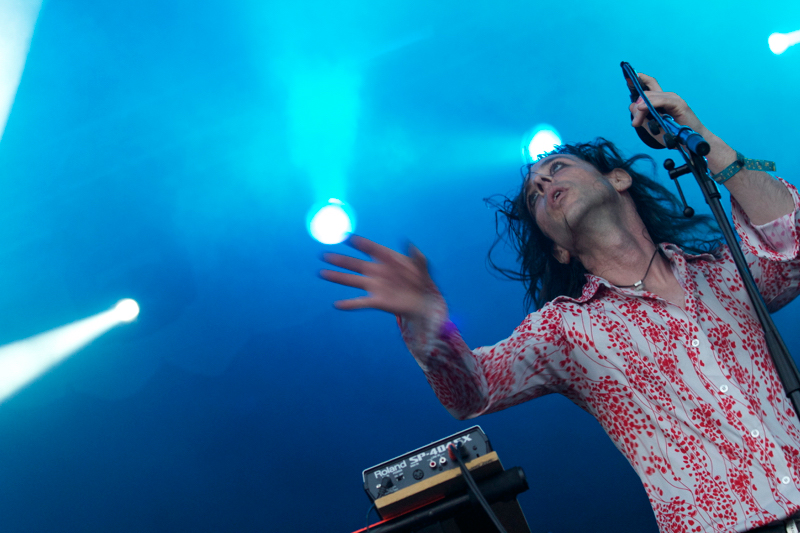 Another completely different story were NYC’s White Hills. The power trio simply cruised from start to finish with astonishing and hypnotic energy. Dave W and Ego Sensation know what they do at all times. It doesn’t matter if it’s a small club or one of the biggest festivals in the world, White Hills just want to burn down the house, shake people’s minds and they got a noisy ovation for that.

Before The Church, the two sets of songs Perfume Genius played (ballads on the one hand, electronic songs, on the other) were effective and showed that Mike Hadreas has gained a loyal and solid fan base. Only natural when you’re an honest chap. Then, Patti Smith effortlessly won over everyone who attended her revision of Horses. She still plays the anti-totalitarianism cards very well, and doesn’t care if she does so on a stage sponsored by a Dutch beer. I’m not a fan of the New Yorker and I really think some of her lyrics are simply ridiculous (some live renditions of “Horses” itself are pure non-sense) but she will die with her boots on. 90% of bands and musicians can’t say the same. 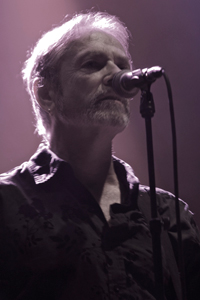 I wonder why it took so long for the PS organizers to include The Church in their line-up. With just 50 minutes, they just played seven songs from four different decades, all them with long instrumental sections and just one international hit (“Under the Milky Way”). They didn’t need to take the first song to get to speed, it was flat out from the beginning, like The Who in Live At Leeds, starting totally revved up. Rock, psychedelia, space, atmosphere… All The Church’s usual ingredients were there and they did the right thing in not being subtle or mellow. You’re in the biggest festival in Europe and you want/have to rock it. The set was of such quality, it was difficult to watch anybody afterwards.

But anyway, just a quick note on Sleater–Kinney, who were as good as their recent gig in Amsterdam’s Paradiso; and Ride, who even though they played with Swiss watch precision, lacked the tension and power they had in their heyday. The other side of the coin were Death From Above 1979, who seemed to be in top form with an impeccable gig; and Ratatat, who haven’t released a record in a decade but who still know how to make everyone who followed them happy.

Patti Smith’s Auditorium gig, in which she was supposed to have done a solo thing mixed with spoken word material, turned our to be a very good full live gig with her band. 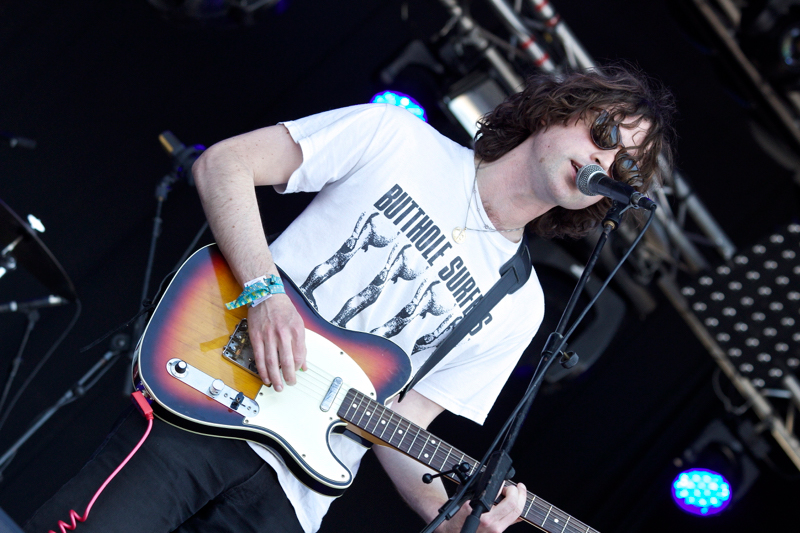 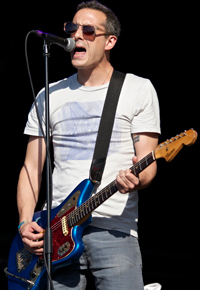 Younghusband left the same impression as The New Pornographers: immaculate sound, but lacklustre, so we went to the sunglass-named stage again to watch locals Nueva Vulcano. Their anthemistic hardcore-rock, reminiscent of the best Replacements, was ideal to turn the heat up before the sun went down in Barcelona. That energy continued with Fucked Up. Like a rude version of Les Savy Fav, the Ontario sextet didn’t disappoint. They won’t be as memorable as White Hills, but it was good, clean, enjoyable fun. DIIV went a step further and away from Beach Fossils, mixing guitar sections that at times give the impression they really wanted to break up with the past. 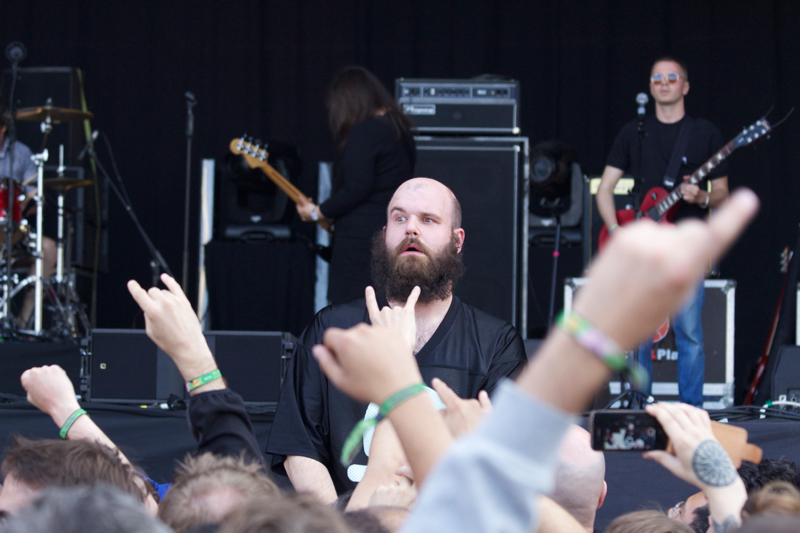 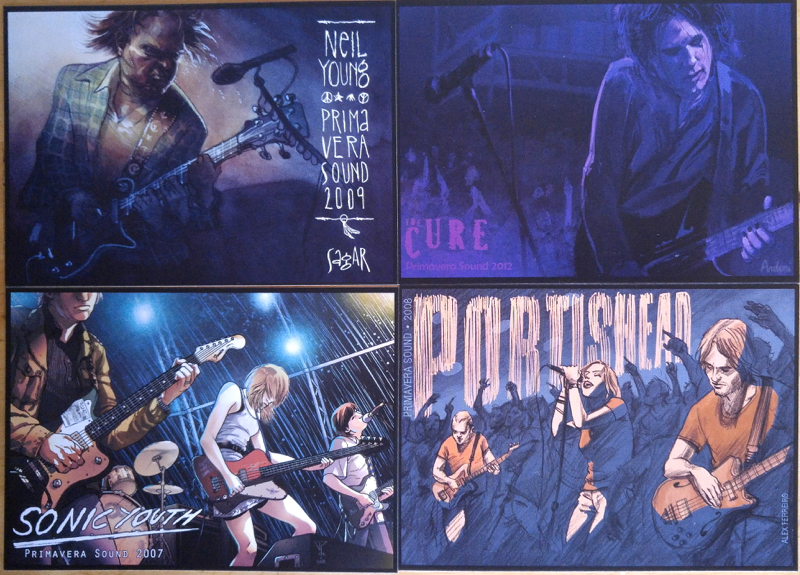 Just as Swans ended their three-hour set in the auditorium (yes, it was good, what were you expecting?), and yours truly made a visit to the guys of the Joso School in Barcelona, who were putting colour and art to the festival with their incredible illustrations and drawings made during the concerts, Tori Amos went onstage. Powerful, sensible, complex, uncomplicated, the myriad of things she can be and accomplish, after 25 years, make her a respectable artist, no doubt about that. Even if it’s with covers like Depeche Mode’s “In Your Room” or classics like “Cornflake Girl”, the pianist won’t leave anyone indifferent. 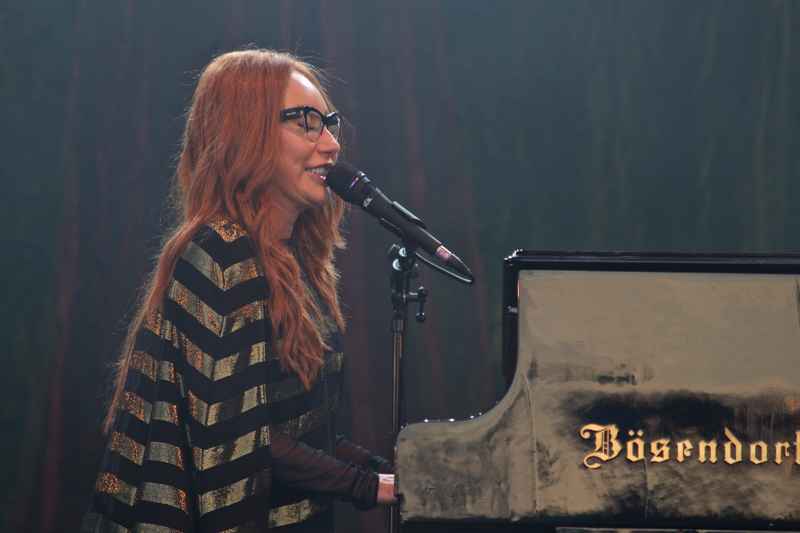 From the chaos of Foxygen (rumour was that Sam France’s girlfriend just left him) we just moved to the ATP Stage to receive Einstürzende Neubauten. This was a festival, so there was no time to display the complexity and density of Lament, a record based on the experiences, the horror and the absurdity of the First World War, so the German combo went for a selection of tunes of different times and places. Blixa Bargeld and co. still know how to control industrial noise but they also reminded they have a place for melody in their concerts and that, like Kraftwerk, they have a subtle sense of humour. Theirs are not gigs for the casual listener, indeed, but a sensible listener will understand the motivations and reasons lying behind their compositions. 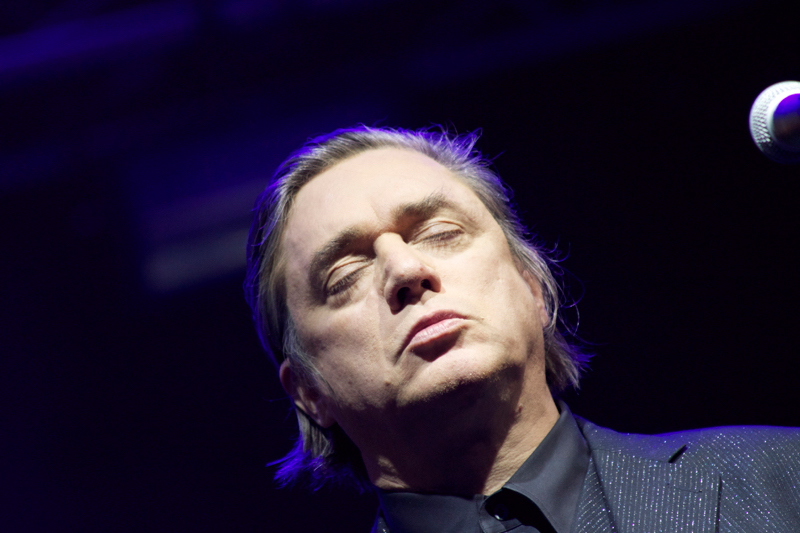 After that we then made quick visits to Interpol (nothing new under the moonlight); Unknown Mortal Orchestra, who really were confident in pinpointing all the ingredients of their catalogue, focusing in the music way more than in the vocals; The Strokes, a band that was simply out of date (why did they even have a ‘date’ in the first place?); Shellac, who for the umpteenth time played the same, but again with really good results; Thee Oh Sees, who now that they have two drum kits they are even more aggressive (and that’s saying something); and Caribou, who after killing it in the 2011 edition at the Poble Espanyol (QRO photos), they killed it again with timeless hits like “Odessa” or “Can’t Do Without You”, as they were the icing on the cake of yet another good edition of the Primavera Sound Festival.