Primavera Sound '19 closed out on the weekend.... 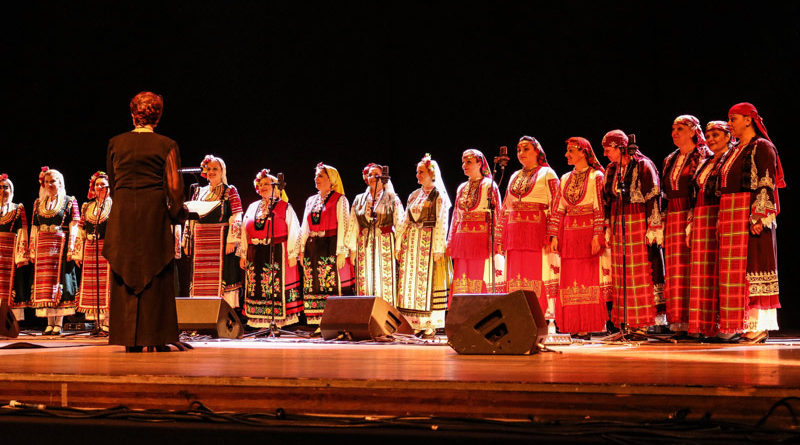 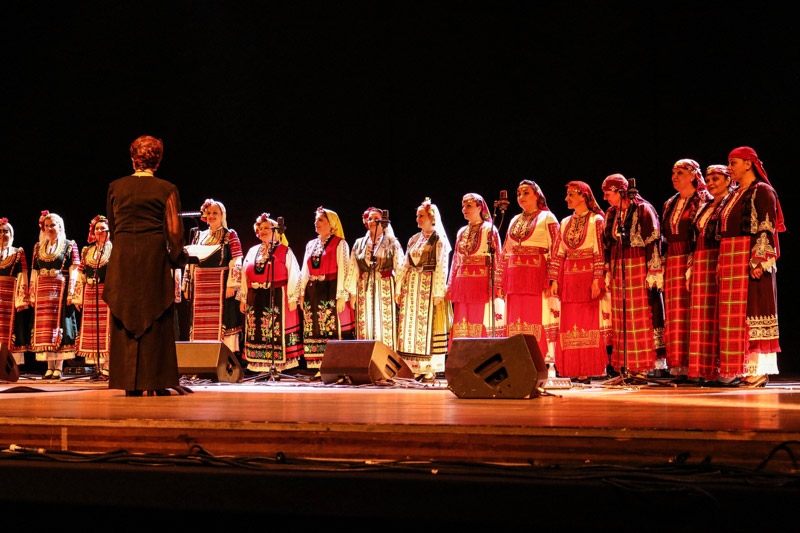 The day started late with The Mystery of the Bulgarian Voices who, especially, had a very special guest in Dead Can Dance’s Lisa Gerrard. Supposedly, this project started life as BooCheeMish, where the choir invited Gerrard to join forces in a celebration of the folk culture of that area (to sum it up). But once onstage, the feeling is different.

The choir itself – in which you can still see its original director, Dora Hristova – was supported by a percussionist, a guitarist, a flute player and a violinist… and also, by a beatboxer.

The traditional songs are simply delightful, the singers don’t stop smiling and when some of them step forward to sing specific parts, they all hold hands supporting each other, which is really nice.

The only problem is that neither Gerrard nor the beatboxer seem to really fit in the ensemble. The singer had a considerable diva demeanour, which clashed with the exquisite simplicity of the choir; and the beatboxer, even if he is respectful and impressive, his intervention is way too cut off from the traditional vibe of the choir.

A lost opportunity to make of that concert something really memorable.

At the same time Built To Spill proved once again their savoir-faire in indie rock performing in its entirety Keep it Like a Secret. It’s not Perfect From Now On, but it helps understand the huge importance of the band in the most guitarist side of American indie rock of the late ‘90s.

Shellac are part of the furniture of the PS since… I don’t even remember. Even though they tend to play some of their classics, they also take the risk of playing new tracks that keep insisting in the energy and the rawness ,which are a trademark of the trio. Always effective, always fun, always reliable. 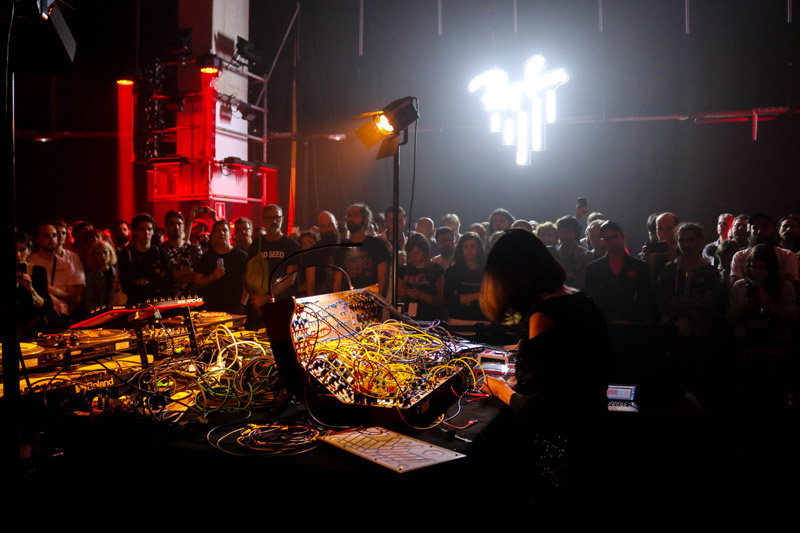 Suzanne Ciani has come back to the electronic side of music after almost 40 years focused on the classical side. Accompanied by her inseparable ‘Buchla’, the electronic device she used to create electronic landscapes, she was also supported by a couple of tablets set up to complement the kind of Blade Runner-esque quadraphonic sound. One can understand where the most ethereal Fennesz and Death in Vegas come from, but at times, she was working way too hard for the meagre amount of sounds emanating from the device. 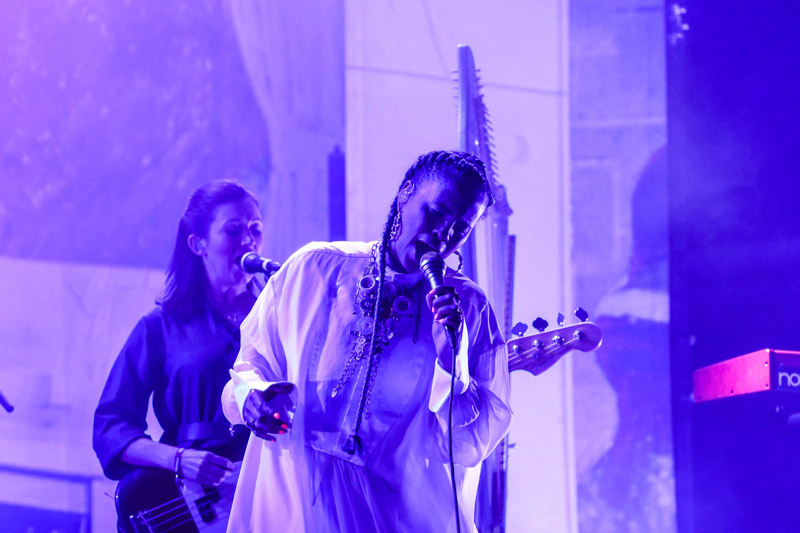 We just caught the last couple of songs by Drab Majesty, and we regretted that, since the cosmic duo sounded like a couple of aliens playing songs that draw a lot from the most psychedelic The Cure. Enough to follow them! Then, at the Pitchfork Stage, Neneh Cherry offered a very chilled out repertoire, including hits “Man Child”, “Seven Seconds” and “Buffalo Stance”. The Swedish innovator felt extremely at ease on stage and even, if the set was not a masterpiece of energy, it certified a different kind of Kraft in a strange PS edition.

Back to the Primavera Stage to watch another of the indie headliners, Primal Scream. At times a bit at half speed, the quintet were in the same vein as Suede: ‘We’re in a festival and we’re gonna play songs so people can have fun.’ “Accelerator”, “Swastika Eyes”, “Kill All Hippies” or “Loaded” sounded pretty good but the group sounded somehow faded in some sections. 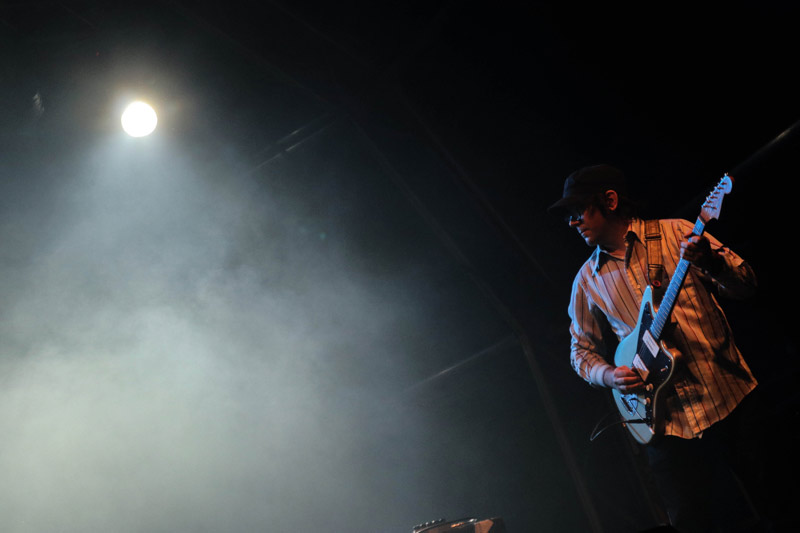 And finally, The Messthetics – the combo with Fugazi’s original drummer, Brendan Canty, and bassist Joe Lally, alongside guitarist Anthony Pirog – provided the audience with an all-instrumental set were they moved from experimental avant-jazz and noise songs and pure fast indie garage. As it happens with Yo La Tengo, every single time Pirog went experimental, trying noises and effects he was on the money, but when he got crazy noisy, he was unbearable. But, all in all, one of those bands worth watching live as they will give you a lot of energy.

Elsewhere, Róisín Murphy got the dancing bug, Jarvis Cocker was the eternal dandy and Stereolab offered a lesson in how to fuse pop with organic electronic sounds.

The only gig worth watching on Sunday was at the Barcelona Stage, in the Barcelona Contemporary Culture Centre, and it was Filthy Friends. Corin Tucker, Peter Buck and co. were fierce and bright, but they were a bit dampened by the sound, quite muddy and generally messy. Their take on indie rock is not as fresh as one expects and not many songs will stay in many people’s music players in five years, but they were honest enough and tried really hard to impress.