The final day at Parc del Forum saw some great acts - scheduled up against each other. ... 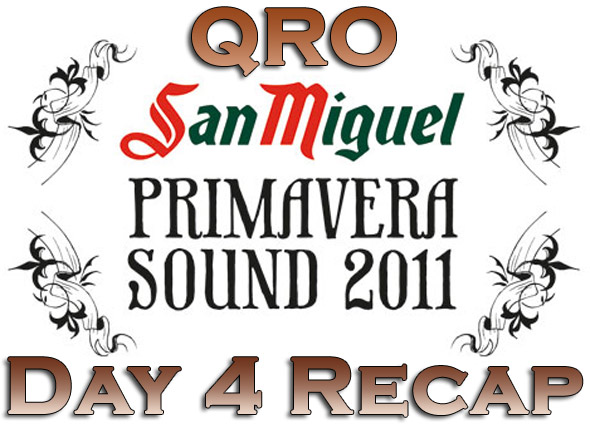 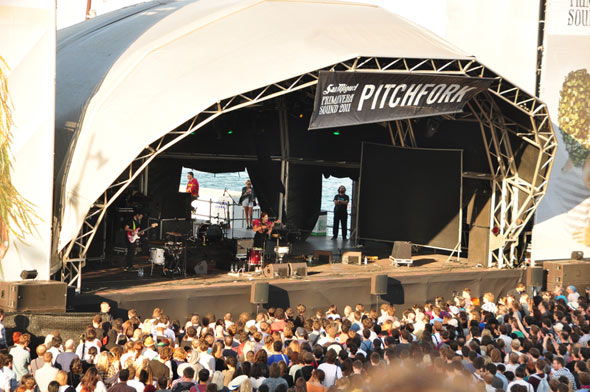 Mike Hadreas is the alma mater of Perfume Genius.  A sort of an honest but yet delicate troubadour, Hadreas softly reveals the brutality of his lyrics in piano melodies like “Mr Petersen”, about a homosexual teacher who loves Joy Division and has suicidal tendencies.  A musician that is worth following.

Click here for photos of Warpaint at Great Scott in Allston, MA on November 30th, 2010 in the QRO Photo Gallery

Click here for photos of Warpaint at Orpheum in Boston, MA on October 3rd, 2010 in the QRO Photo Gallery

Click here for photos of Warpaint at Great Scott in Boston, MA on August 16th, 2010 in the QRO Photo Gallery 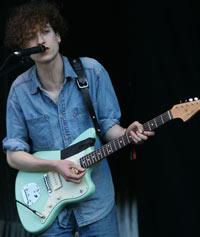 Yuck were one of the disappointments of the festival.  Not that they don’t have any quality but live their music really reveals their debts on Pavement (QRO live review) and other ‘90s bands of that kind, a thing that make them loose their identity.  Meanwhile, in the Twilight Zone Llevant stage, Warpaint was the opposite pole to Yuck.  They were so comfortable onstage and playing around with their repertoire that it looked like their record could’ve gone much further than it actually did. 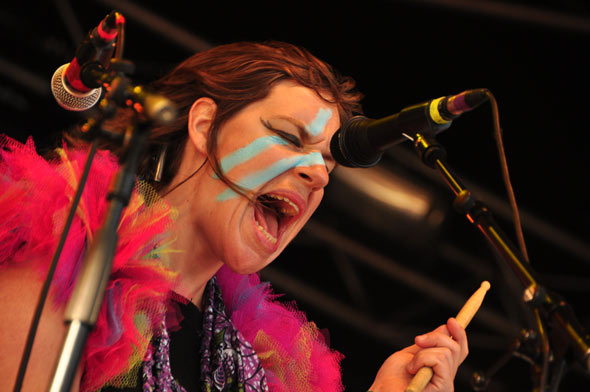 Click here for photos of tUnE-yArDs at Music Hall of Williamsburg in Brooklyn, NY on May 21st, 2011 in the QRO Photo Gallery
More

Click here for photos of tUnE-yArDs at Brighton Music Hall in Boston, MA on May 16th, 2011 in the QRO Photo Gallery

Click here for photos of tUnE-yArDs at Lincoln Hall in Chicago, IL on May 10th, 2011 in the QRO Photo Gallery

Click here for photos of tUnE-yArDs at Central Park SummerStage in New York, NY on August 1st, 2010 in the QRO Photo Gallery 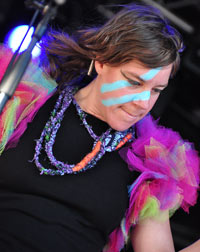 tribal sounds, a DIY philosophy and an attitude onstage like the world was ending tomorrow and the best choice for us would be to enjoy ourselves.  With a bass player and a small brass section, Garbus achieved a connection with the audience that was hard to beat in this PS. 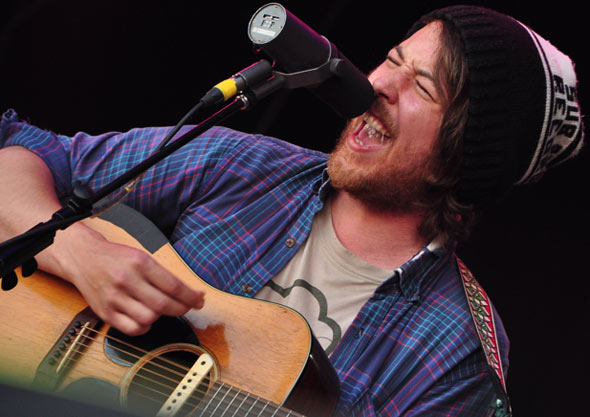 Click here for photos of Fleet Foxes at Bowery Ballroom in New York, NY on March 28th, 2008 in the QRO Photo Gallery
More

Click here for photos of The Album Leaf at First Unitarian Church in Philadelphia, PA on May 2nd, 2010 in the QRO Concert Photo Gallery

Click here for photos of The Album Leaf at Bowery Ballroom in New York, NY on May 1st, 2010 in the QRO Concert Photo Gallery

Click here for photos of The Album Leaf at Bowery Ballroom on May 13th, 2007 in the QRO Concert Photo Gallery

Fleet Foxes, while not being excellent on record, proved they are something else onstage, giving their songs a much better treatment and solidity.  Their vocal harmonies also 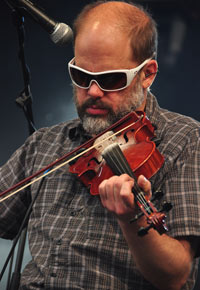 helped and so did the PA, allowing their traditional folk to sound bright and clean.  Right after the folkie foxes, The Album Leaf dared to approach their PS debut with a minimalist line-up, with only leader Jimmy Lavalle and violinist/keyboardist Matthew Resovich representing the band, who were joined by a local string quartet.  The gig sounded well, but their set was based on their most ambient tracks so it hardly took off, so to speak.  They would’ve been a great band for the auditorium. 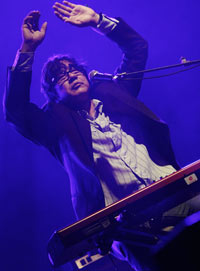 Money Mark was one of the worst hit artists by the 2011 PS schedule, as they played almost at the same time as PJ Harvey and a bit later than Einstürzende Neubauten.  But the keyboardist, well-known for his work alongside Beastie Boys (QRO album review) and his contributions to the music of Yoko Ono or Jon Spencer Blues Explosion (QRO photos) never lost his temper and offered a solid and really fun set of funk, rhythm and blues, jazz and other herbs that was noisily received by that part of the audience who didn’t want to watch Polly Jean 100 yards away nor wanted to be overwhelmed by the industrial rhetoric of the aforementioned Germans. 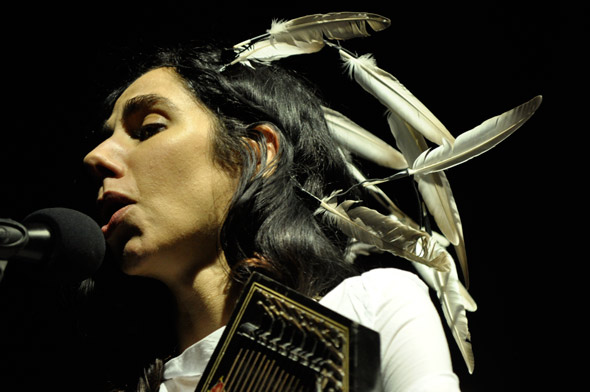 Click here for photos of PJ Harvey at Terminal 5 in New York, NY on April 19th, 2011 in the QRO Concert Photo Gallery

PJ Harvey : The sexiest woman in rock, one of the most restless artist of her generation and, for once, daring to walk a sort of political path wanting a change for the current situation of her home country.  The songs from Let England Shake (QRO review) sounded clean and tense for the most part thanks to the contribution of Mick Harvey and old fellow John Parish.  Older tracks such as “Big Exit”, “C’mon Billy”, “The Sky Lit Up”, or “Meet Ze Monsta” with which she ended her gig were really well chosen to suit her latest tunes but the overall feeling is that her music still works far better in smaller places.  The main PS stage with an average capacity of over 20,000 people may be good for people like Neil Young, Pulp, Sonic Youth or Flaming Lips, but for PJ Harvey’s current music is far too big as it’s kind of hard to feel the complexity she displays on record, even though it was a good concert. 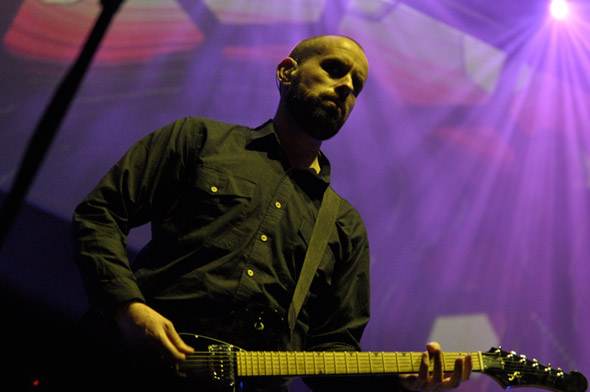 Click here for QRO’s review of Mogwai at Wonder Ballroom in Portland, OR on May 5th, 2011

Click here for QRO’s review of Swans at Roseland Theater in Portland, OR on February 27th, 2011

Mogwai and Swans started their gigs at the same time.  The latter set the old amphitheatre stage (officially the Ray-Ban one) on fire, with a sort of post-metal repertoire (in contrast with their industrial past) that was raw, strong and forceful.  Michael Gira faced the audience and even threatened them and insulted them for their apathy.  Only for that, it was one memorable gig.  On the other hand, Mogwai played in the Twilight Zone Llevant stage and the point of their gig was to prove they still have the nerve to stir the audience’s feelings.  Old tunes like “Mogwai Fear Satan”, “Helicon 1” or “Hunted By a Freak” still sound fresh and new songs like “Rano Pano” or “San Pedro” never sounded out of place.  Also, a good thing from Mogwai is that they have been able to prove they have grown up and know how to develop the sound of their songs.  A good example for this is the 2006 single “Travel Is Dangerous”.  Much probably written about the sinking of Russian submarine Kursk in 2000, the band played the song not with the usual anger displayed on record but with much more tenderness and sadness, like focusing more on the pain of the families of the deceased than the impotence of those who passed away inside the old and rotten machine.  All in all a splendid work of electric live music. 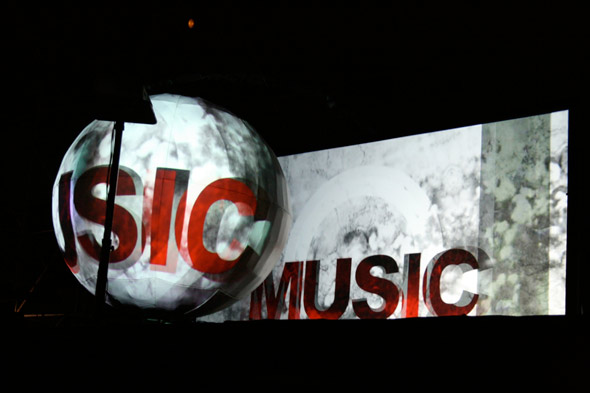 Click here for photos of DJ Shadow at Irving Plaza in New York, NY on November 15th, 2010 in the QRO Photo Gallery

And finally DJ Shadow ended the Fòrum stint of the 2011 PS with a very visual concert plagued by his trademark beats.  Even though he tested some of the new tunes of his forthcoming new record,  “The Less You Know The Better”, due to be released in early September, Shadow’s set-list fluctuated from classics like “Organ Donor” to some of the new tracks like “Def Surround Us”.  Most may think that Shadow has lost it since his last album, The Outsider, but onstage he’s still a reference of, to make it brief, the modern hip-hop and DJing. 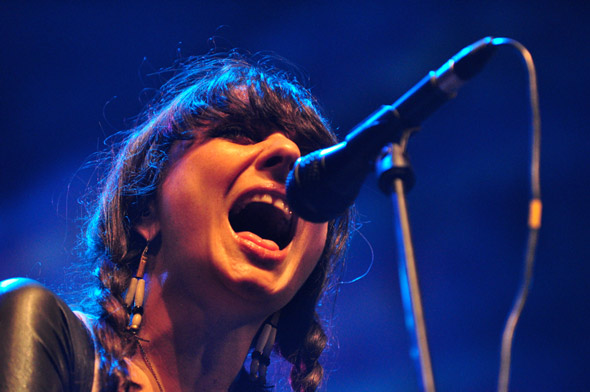 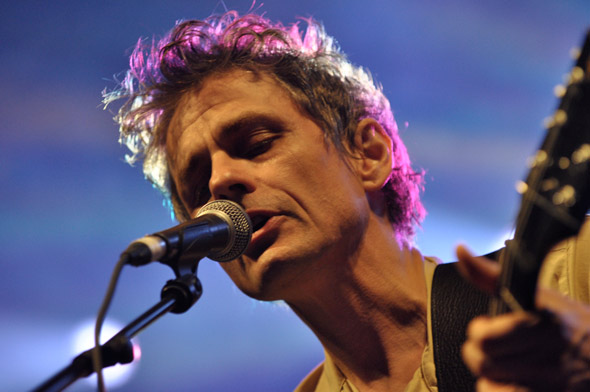 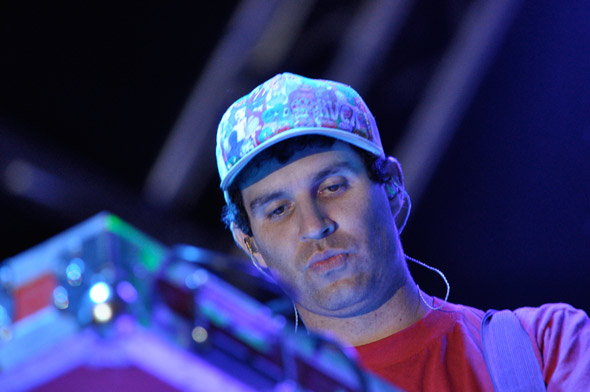 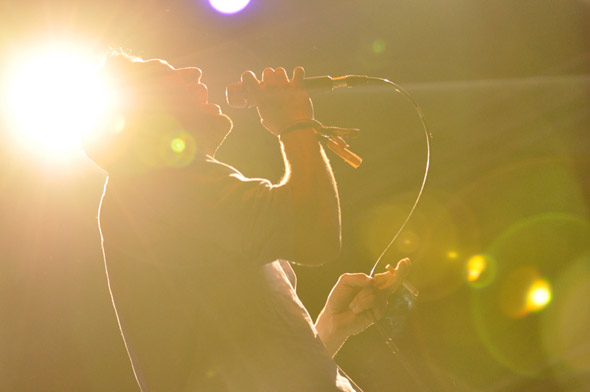