This pandemic lockdown has been going on so long, sometimes one can forget about life in ‘the before time,’ when we could do things like hug people.... 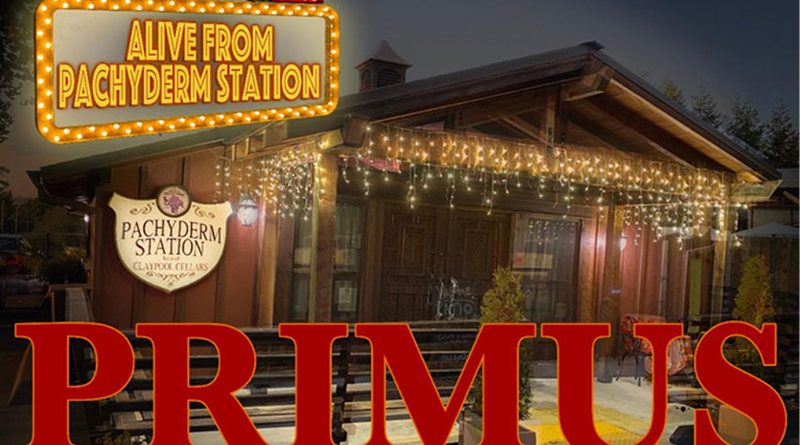 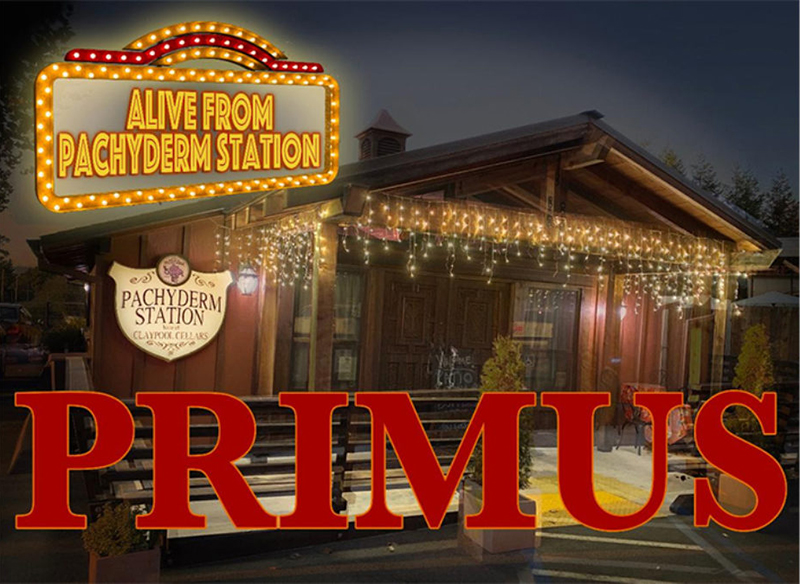 Click here for all of QRO’s coverage of Primus in QRO’s ‘Spotlight On : Primus’ feature

This pandemic lockdown has been going on so long, sometimes one can forget about life in ‘the before time,’ when we could do things like hug people.  There are whole muscles that have atrophied from lack of use, such as live fandom.  That’s what makes these livestream events so important for music lovers.  People might scoff at them, say they’re not “a real show,” but we need them more than any concert you might have gone to in the past.  Like Primus’ “Alive From Pachyderm Station” performance on Friday, December 11th.

“Pachyderm Station” is actually singer/bassist Les Claypool’s own Sebastopol, California winery Claypool Cellars, though it was the first time that Primus had played there.  Claypool, drummer Tim Alexander, and guitarist Larry “Ler” LaLonde were in tight (though proper COVID precautions were taken, as noted at the show’s start), making it almost like a band’s rehearsal in a garage, if it was a big, veteran rock trio’s classy garage that made wine.  It was an up-close intimacy which fans rarely get from the theatrical group, as exclaimed upon in the live chat.

And there were many fans in the live chat, as this was definitely a show for the hardcore Primus fan.  The group has long had a following more akin to a jam band (though someone in the chat literally said, “Primus is not a jam band!”), with esoteric weirdness that has made them unlike any other act out there, from their early nineties alternative rock breakthrough on.  When the only artist you get compared to is kings of weird The Residents, that’s saying something.  Even hits like “Wynonna’s Big Brown Beaver” or the theme song to South Park ain’t like anything else.

But this wasn’t a night for the best-known songs.  Even alt-nineties singles such as “Sailing the Seas of Cheese”, “Mr. Krinkle”, and “Jerry Was a Race Car Driver” were fried up special, like Claypool playing upright bass on “Cheese” & “Krinkle”.  For the first time in twenty years, Primus played Antipop’s “Lacquer Head” and the title track, to great live chat acclaim (before “Antipop”, Claypool gave a tribute to “Eddie V[an Halen]”).  There was even the live debut of “Eclectic Electric”, and of course the night from the “Station” ended with “Southbound Pachyderm”.

Yes, there were extended jams during songs such as “American Life” and “Harold of the Rocks”, because while Primus might not be a jam band, they’re also not not a jam band.  Claypool’s psych-spice bass playing has long been acclaimed (making him a hero to Generation X bass players everywhere, even if your band never got out of your high school garage), but one mustn’t overlook Alexander and LaLonde.  Alexander not only kept up with Claypool’s extended, complicated rhythms, but had his own tricks, while LaLonde’s axe work overlaid and expanded excellently, full skillful psych-jam without veering into full self-indulgent noodling.  They could go from the crazy “Too Many Puppies” to the mock-march “Sgt. Baker” and back again.

While the livestream didn’t have the lighting tricks or giant inflatable astronauts of their regular shows (the most one got to props were shots of nacho cheese before “Seas of Cheese” and a pig mask like from the video before Pork Soda’s “Mr. Krinkle”), there was great camera work that utilized the intimate nature of the performance, including some reflections, overlays, fish eye, and such.  Probably not being performed live (a topic of debate in the live chat), the song title was posted at the bottom of the screen at each piece’s start, so chat would go wild before the likes of “Pudding Time” – but they’d go wild before every song.  The chat was a definite highlight, connecting fans from the pre-show exclamation that “Primus sucks!” (an old joke) to comments like, “Beers are super cheap and no line to pee” and “drunk alone wife gonna be pissed”.  Obviously, it’s not easy to talk amongst yourselves at a regular live Primus show, but here you could do everything from discuss the intricacies of Claypool’s bass playing to just a “WHOAAAAAAAAAAA”.

“Can we count this as a show?” someone in the chat asked, wondering whether longtime fans who’ve seen Primus live on many occasions could notch this one on their belt (a little like a Dead fan, but let’s not press the point).  No, “Alive From Pachyderm Station” wasn’t like your regular Primus concerts (‘regular’ being a highly relative term with this band), but yes, this was something special.