<img src="http://www.qromag.com/wp-content/uploads/2011/10/primusgreennaugahyde.jpg" alt="Primus : Green Naugahyde" /><br /> The one-and-only act is back to new material with <i>Green Naugahyde</i><span style="font-style: normal">, a record that is unmistakably Primus, even if... 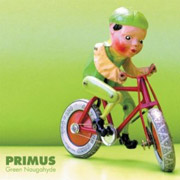 Even in the alternative music’s post-Nevermind commercial heyday, back in the early nineties, Primus always stood out.  The San Francisco act owed less to grunge or punk, or even eighties college-rock, than to the experimental Bay Area acts of the sixties & seventies such as The Residents (QRO live review), only mixed with the trio-rock of Canada’s epic Rush, plus the prominence of singer/frontman Les Claypool’s bass guitar and funkified rock ways.  They continued to stand out with odd videos (including actual human oddities for "Mr. Krinkle") and costumes, but success still found them – and they still rejected it, first by no longer playing biggest hit "Wynona’s Big Brown Beaver", then going on hiatus in 2000.  Their return three years later was more of a nostalgia tour, behind live DVDs and with the return of their early nineties drummer Tim Alexander, but now the one-and-only act is back to new material with Green Naugahyde, a record that is unmistakably Primus, even if that’s all it is.

Click here for photos of Primus at Val Air Ballroom in West Des Moines on October 15th, 2011 in the QRO Concert Photo Gallery

Click here for photos of Primus at Roseland Ballroom in New York, NY on September 30th, 2011 in the QRO Concert Photo Gallery

Much of Green Naugahyde reminds of prior Primus releases, from the minute-long fade-in opener & fade-out closer ("Prelude To a Crawl" and "Salmon Men"), to the latest in the ‘Fisherman’s Chronicles’ ("Part IV"), "Last Salmon Man".  Claypool’s low-slung bass-funk and guitarist Larry LaLonde’s psych elements are still there, though Naugahyde is probably a darker record than nineties releases like Pork Soda – it is a darker decade.  "Eternal Consumption Engine" laments that, "Everything’s made in China" as the Primus funk engine chugs along, while other songs have titles that clearly spell out the darker view: "Moron TV", "Extinction Burst", "Jilly’s on Smack", and even straight-up "Tragedy’s a’ Comin’".  Only "Lee Van Cleef" has the fun Primus of old, a backwoods version of the band that should be what today’s freak-folk scene aspires to.  Unfortunately, there’s too little of that on Naugahyde (no great singles like "Jerry Was a Race Car Driver", or even the starker "My Name Is Mud" & "Mr. Krinkle"), and only really in "Jilly’s on Smack" does the darkness do something more than what Primus has done before.

Early nineties & twenty-first century drummer Tim Alexander wasn’t interested in making new music, so left in 2010 and was replaced by Furthur’s Jay Lane (who had actually spent a year in Primus way back in 1988/9), but the band has not changed their sound.  But if Green Naugahyde isn’t new for Primus, it’s still different than anything else out there, even more so after their lengthy hiatus of new material.