Princess Goes To the Butterfly Museum

Princess Goes To the Butterfly Museum returned to Mercury Lounge on Halloween.... 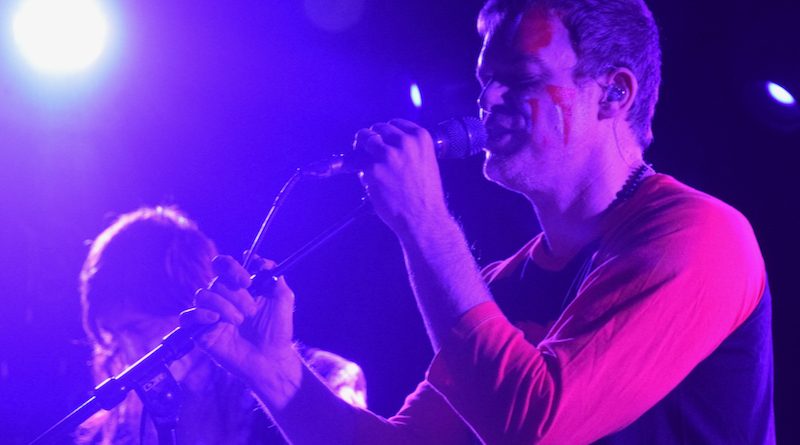 Click here for photos of Princess Goes To the Butterfly Museum at Mercury Lounge on March 12th, 2020 in the QRO Concert Photo Gallery

On March 12th of last year, New York City’s Mercury Lounge (QRO venue review) announced that it was closing after that evening, until further notice, as the COVID shutdown hit the Big Apple early. Playing that night, in what became the last night, was Princess Goes To the Butterfly Museum, the three-piece of Hedwig & The Angry Inch vets Michael C. Hall, Matt Katz-Bohen, and Peter Yanowitz, who did their theatrical best, face paint included (QRO photos). Over the pandemic, the band released debut full-length, Thanks For Coming (QRO review), and a slew of great videos (plus did an interview with QRO – QRO interview). Over Halloween weekend, the band returned to Mercury, both on All Hallows’ Eve Eve, October 30th, and after that sold out, added a special bonus early Halloween Sunday night show.

To answer the obvious, yes, on Halloween the band was in costumes, as even were some in the crowd (spotted a Super Mario, and the scary twins from The Shining). However, the Princess costumes had to give way to the needs of performing, most notably with drummer Yanowitz, who had on a fur zip up that quickly became way too warm. Hall jokingly asked him if was hot, which Yanowitz was, first unzipping the white fur, then later taking it off completely – to cheers from the crowd (his torso was naked underneath), with which Yanowitz faked throwing the fur to the audience before stuffing it beside his kit. Hall, “It’s like that – it’s not like that…”

As an overfill bonus show, the Halloween night set wasn’t the real ‘night’ show, instead with doors at 5:00 PM, and a second, separate act having a later show starting at 8:00 PM. And then the opener couldn’t make it, so Princess went on the Mercury stage at 6:00 PM, decidedly early even in the before-times. NYC kids were still trick-or-treating (Daylight Saving Time ends the Sunday after in America, thanks to the candy lobby), and the subway was still full of costumed people going to their first costume party since the pandemic. Greenwich Village’s Halloween Parade hadn’t even begun yet (those out in cop uniforms were actual cops…). So, if you had to scramble and still only made it during their opener “Offering”, to be understood.

Also to be understood was that the crowd was out of show-going form. It’s been a long pandemic, and indoor concerts in particular are only coming back now, with the colder weather. It’s still unusual to be in a crowd at all, let alone indoors with people in coats but only a few with masks (can’t drink your overpriced beer otherwise, though Mercury’s prices aren’t as exorbitant as other NYC venues). The record came out what feels like forever ago, February. And there were probably some there who were just out for a night out.

And the set didn’t just draw from Thanks. Early on was pre-Thanks single “Vicious” (whose video was a snapshot of the NYC subway in the before-time – QRO review), before the more epic new song “Blur”. The post-Thanks pieces did largely seem to be soaring, such as “Blur”, “Let It Go”, “Take Me Home”, and “Jet Pack” (though the latter’s question, “Whatever happened to my jetpack?” was already asked by We Were Promised Jetpacks…).

The ‘dark disco’ of Thanks did fit the setting, such as the cutting “Nevertheless” and more out there single “Eat an Eraser” (QRO review). And if you couldn’t dance to the likes of the smashing “Sideways”, “Airhead”, or “Angela Peacock”, they still hit you hard. Plus, later on, a few more drinks into the early evening, hips loosened for numbers like “Love American Style” and “Tomorrow’s Screams”.

After Thanks’ title track as the evening was coming to an end, a fan yelled, “One more song,” with which another yelled, “Two more,” so then someone else yelled, “Ten more!” The escalation ended with “Start over!” But there was only one more, the new disco-dark “Come & Talk To Me”, before the end of the early set. So, there was still time to go to that party or do whatever adults do when they’re too old for trick-or-treating (like hoping no one buzzes and you can eat all the candy you bought on the justification of ‘just in case in some kid comes,’ but really for yourself).

Right after that next American holiday, Thanksgiving, Princess Goes To the Butterfly Museum go to Europe for a tour there (and there’s even another NYC show on the night before Thanksgiving). And hopefully there will soon be a full U.S. tour, Hall’s promotional schedule for the Dexter revival notwithstanding (he did talk up his band when on Colbert a couple of nights later to promote Dexter: New Blood), the Princess Going to a Butterfly Museum near you.