Project Pabst came back to Portland, Oregon for the second time to celebrate Portland’s continued thirst for the Milwaukee (now Los Angeles-based) brand.... 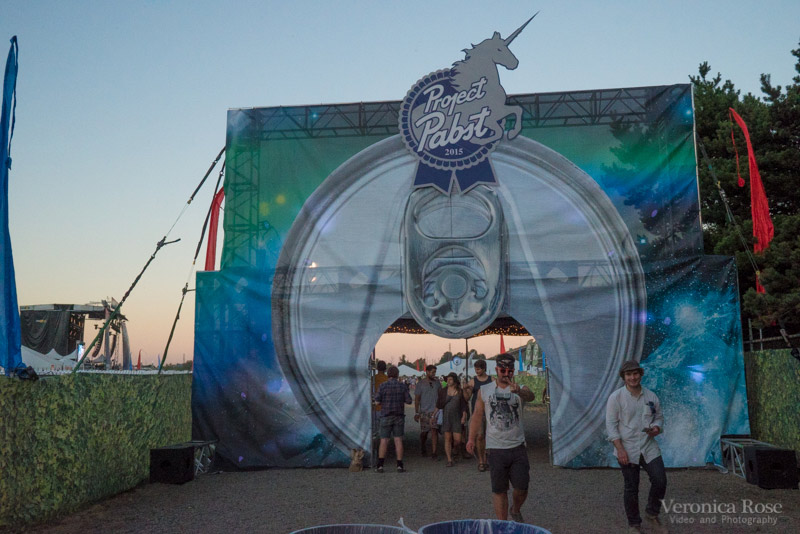 Project Pabst came back to Portland, Oregon for the second time to celebrate Portland’s continued thirst for the Milwaukee (now Los Angeles-based) brand, Saturday & Sunday, July 18th & 19th. The inaugural Project Pabst (QRO recap) was only nine months ago, and Portland had a beautiful July weekend in stock for festivalgoers. 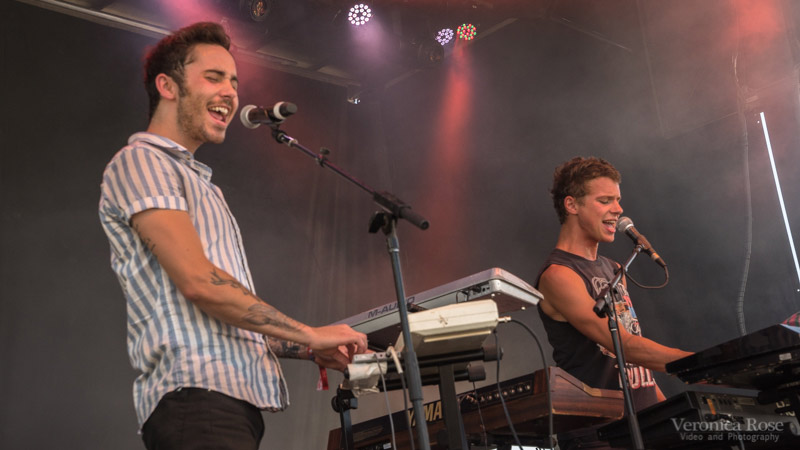 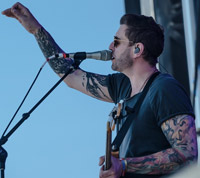 I arrived hot and sweaty from my bicycle ride (thank you, heat wave) to the waterfront construction zone that had been taken over for the weekend, (also thankful for the free bicycle valet). I had already missed Hustle & Drone, Priory, and The Velvet Teen, so with my sunglasses sweat-glued to my face I quickly headed out for Against Me!. 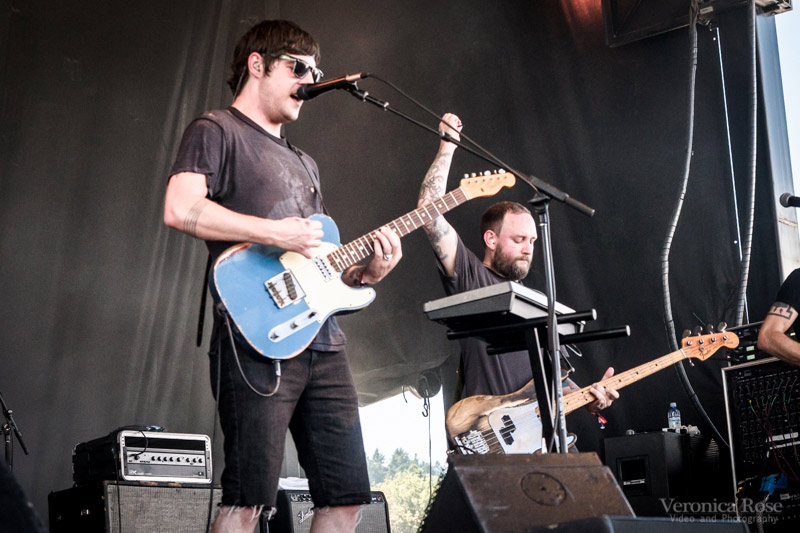 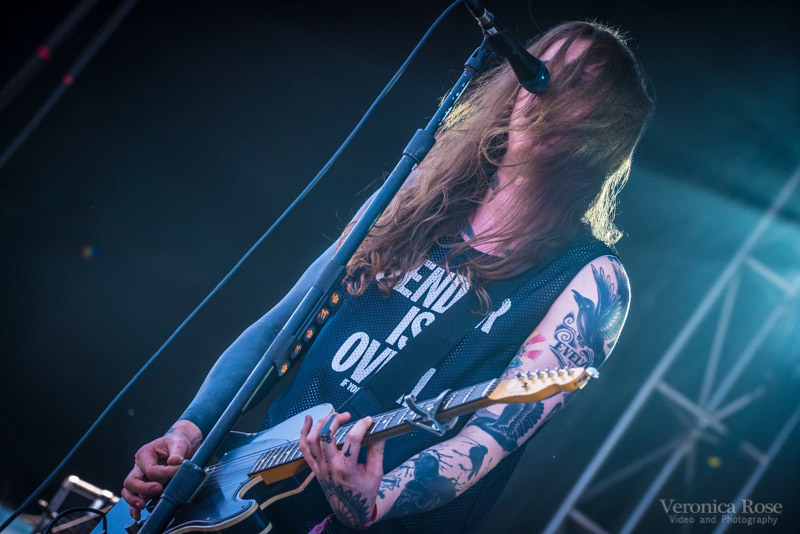 The first thing that struck me as Against Me! took the stage was the cacophonous cheering and the starkly black tattoo running down Laura Jane Grace’s right arm, ready to rock and proudly displaying a shirt reading “Gender is Over!”. The crowd’s excitement and energy was palpable, although a little humorous as Portlanders seem to always dance like they’re at a Phish concert.

Project Pabst’s two stage format ensured that the crowd never has to wait too long for music – as soon as one show ended, a show was about to start at the other stage. If one isn’t interested, there was StubHub’s air-conditioned #NoMoFoMo tent to hang out in, food, PBR to drink, an arcade, cornhole to play, or shade to find. 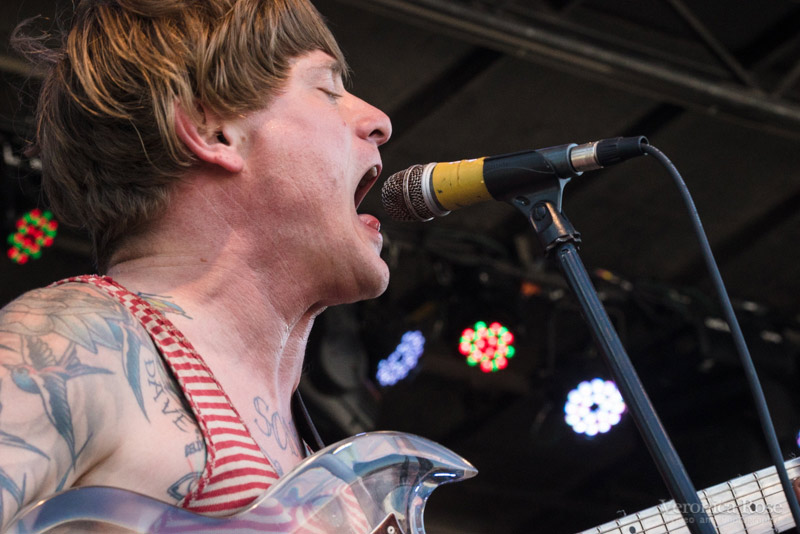 Thee Oh Sees appeared on the smaller stage situated near the Ross Island bridge, immediately joking “Hope you all brought sunblock!” Despite claiming a hangover that several on-stage beers were only just beginning to alleviate, John Dwyer was moving and shaking, head-banging, and generally having a great time. About halfway into the set, I was struck by how excellent the sound production was, especially for an outdoor festival. 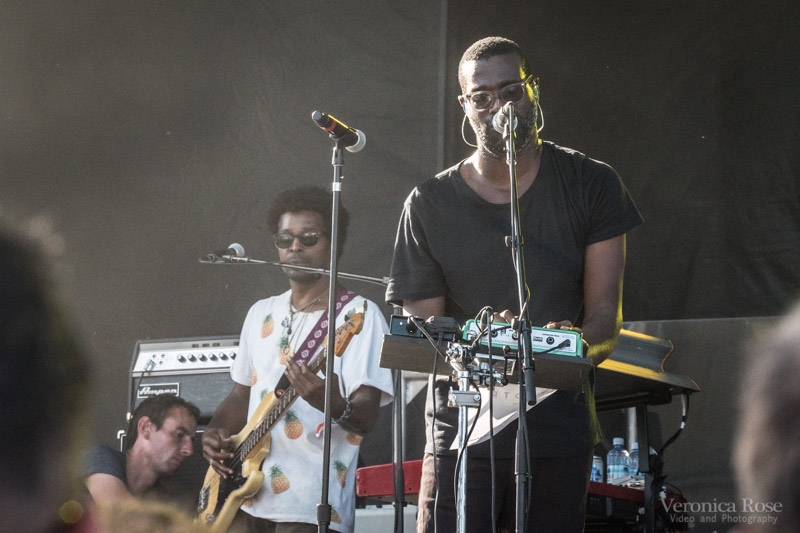 TV On the Radio graced the Captain Pabst stage at 6:45pm to overwhelming cheers from the crowd. Frontman Tunde Adebimpe kept the energy up running and dancing across the stage. However, the heat of the day was taking its toll. 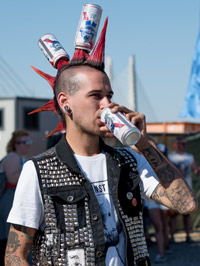 It should be mentioned that Project Pabst is not a standard festival. It’s almost quaint in the way that there are no 45-minute waits for a bathroom, you can hear the music perfectly from the vendor’s lines, and only one person received an ambulance ride to the hospital.

Now we move to what was easily the most exciting act of Day 1: Run the Jewels. For a city with such a lackluster hip hop scene, the crowd’s reaction to the RTJ’s performance really begged the question, “Why doesn’t Portland have more hip hop?”

El-P and Killer Mike entered to the tune of Queen’s “We are the Champions” and flying half-empty tall cans of PBR. The whole set was somehow louder, more energetic, and more in your face than their studio records, each bar punctuated by blasts from water guns apparently dispersed to the crowd. Somehow, “Lie, Cheat, Steal” seemed the quietest part of the set, as if the entire crowd sat enraptured by seeing their favorite song performed. It should also be noted that this was the only point during the day security could be seen cracking down on people smoking anything that wasn’t a cigarette, despite Oregon’s recent recreational legalization of marijuana. 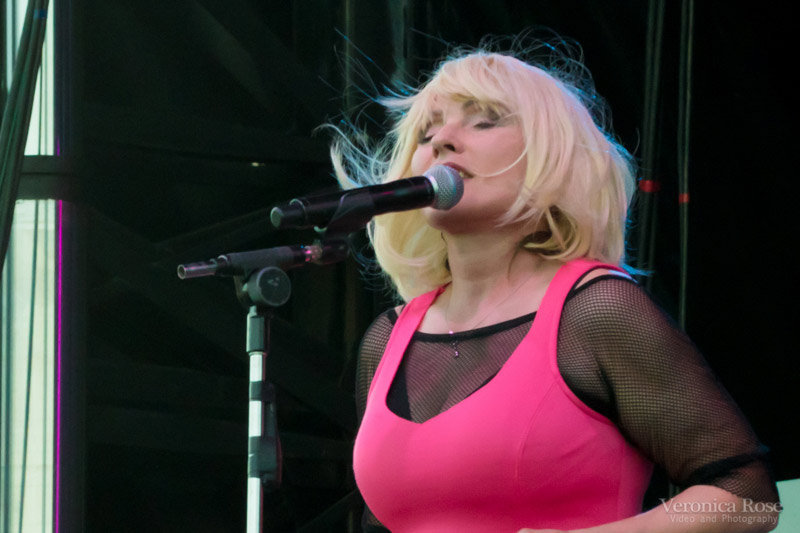 At this point exhausted by the day’s festivities, the crowd dispersed to the water fill stations and to wait for Blondie’s appearance. The minute Debbie Harry strutted on stage, it was absolutely clear that this would be a show to remember. Blasting through hits like “One Way or Another,” “Call Me”, their famous rendition of The Nerves’ “Hanging on the Telephone”, and even a cover of the Beastie Boys’ “(You Gotta) Fight for Your Right (To Party!)”. Harry, undoubtedly still hip, simply shouted “4:20” into the crowd.

Day 1 ended without an encore, but the crowd appeared to leave eager to either head home and rest up for the next day, or head to an even later night at one of the aftershows attached to Project Pabst. 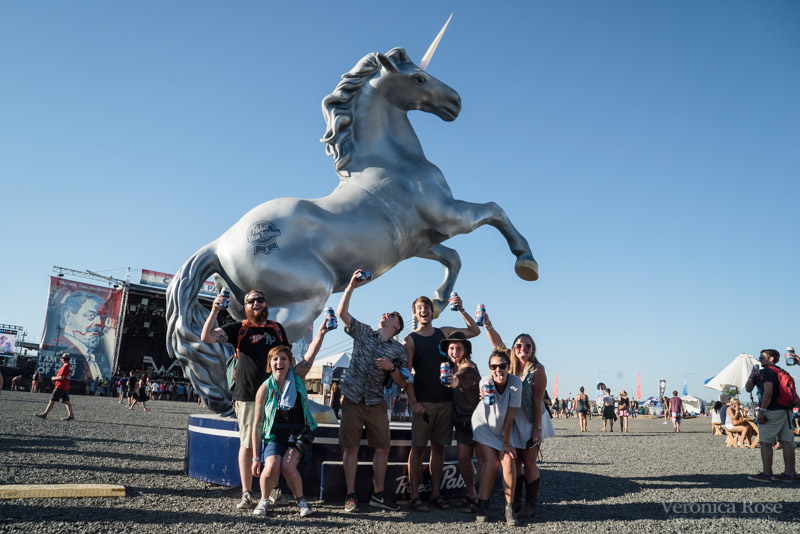 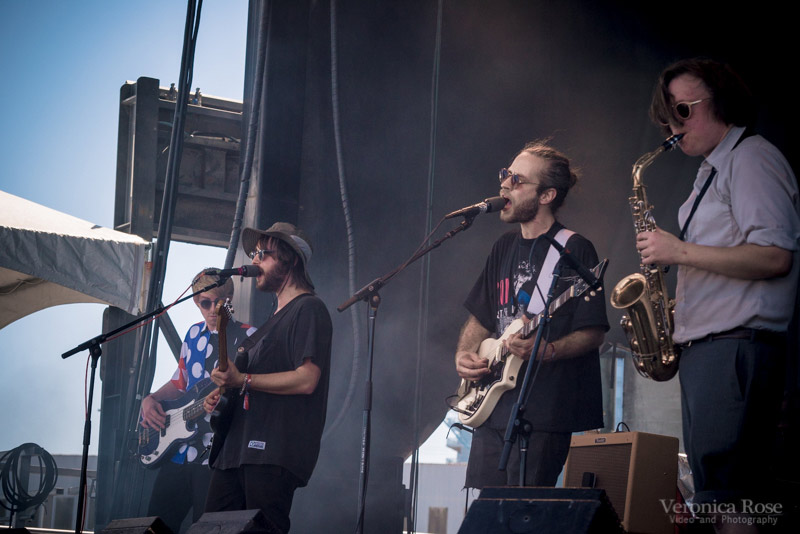 The second day started off with Portland’s own Wampire playing tracks from their records Curiosity and Bazaar (QRO review). Despite most of the attendees still brunching off their hangovers, Wampire put out an excellent rock set, and is definitely on my list of acts to see in Portland. 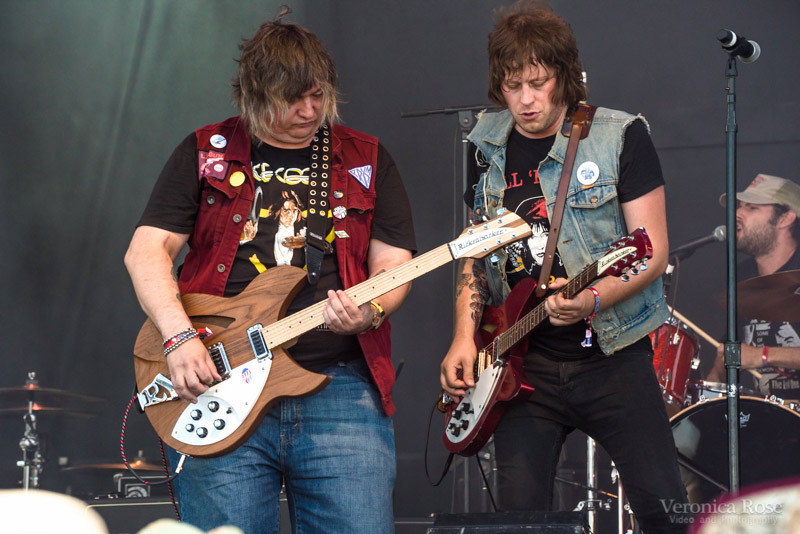 Wild Ones played their set of yacht rock, perfect for relaxing on a hot Sunday, but the afternoon was won by the remaining parts of Portland’s tragic punk outfit Exploding Hearts, dubbed Terry & Louie, playing the smaller stage. Attendees in the crowd ranged from younger punks in studded jackets to bros that may have never been east of the river, all singing along together to songs from a decade ago. It would’ve been heartwarming save for that these are loud punk songs about sniffing glue. Despite, or maybe especially because of, some confusion with a new song (“We’ve played it six times, and only done it right once!”), Terry & Louie still have their punk spirit. 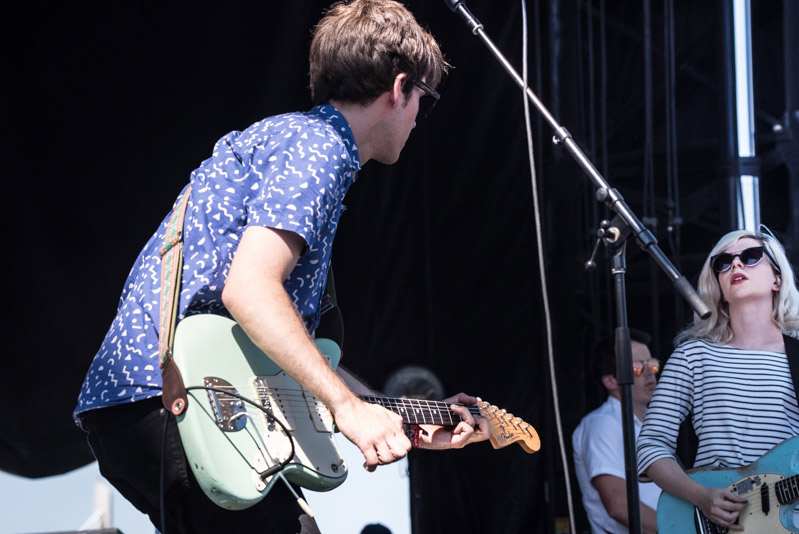 After that detour into straight punk, Toronto’s Alvvays brought their classic Canadian charm and politeness, even proclaiming, “Portland is [our] favorite American city… Can I say that without it becoming some kind of thing?” Following the high energy punk of Terry and Louie, there was a noticeable change in the crowd as people swayed side to side while the true heroes of the weekend cut through the crowd, spritzing people with water bottles. 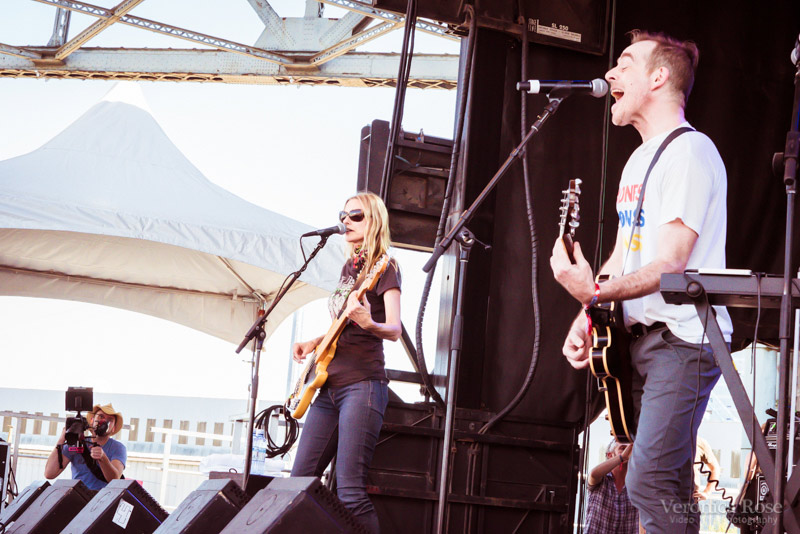 Aimee Mann and Ted Leo performed as The Both on the smaller stage, delivering their solid three piece sound with Leo’s guitar truly shining, but an unfortunate equipment malfunction left the keyboard absent. 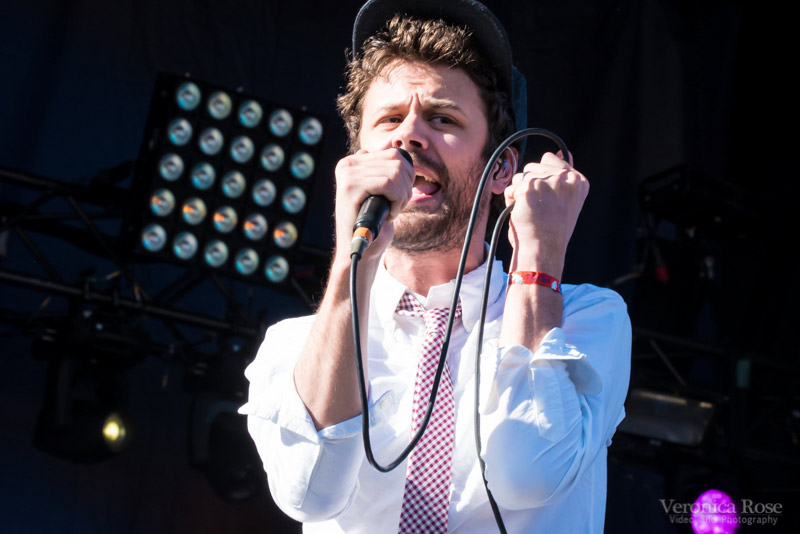 Passion Pit opened with a string of hits, instantly thrilling the crowd. Looking around, it was easy to see that the crowd had grown larger than ever. During the set the heat seemed to set in, and I’m sure I wasn’t the only one wondering how Michael Angelakos was up on stage wearing a tie. 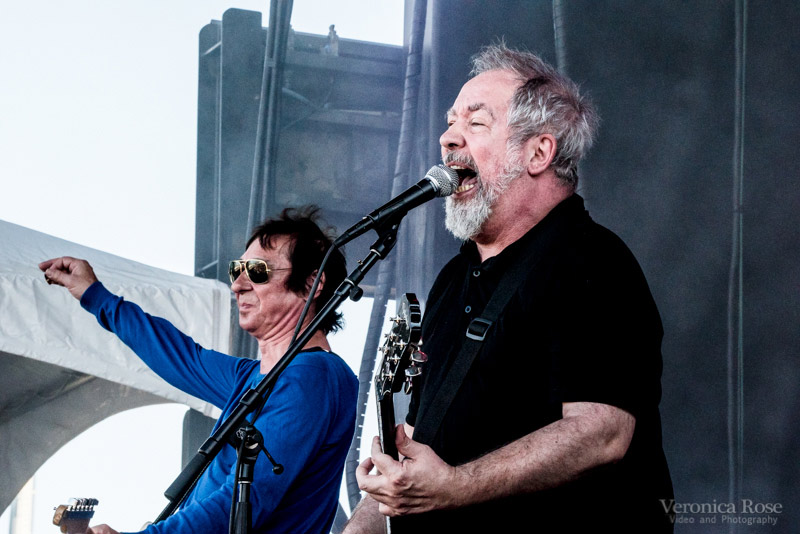 Despite the crowd wilting, the Buzzcocks put on an excellent show. They may be old and grumpy, but much like Debbie Harry, Pete Shelley managed to keep his power and Steve Diggle was rocking out in ways that would make musicians half his age clutch their hips. 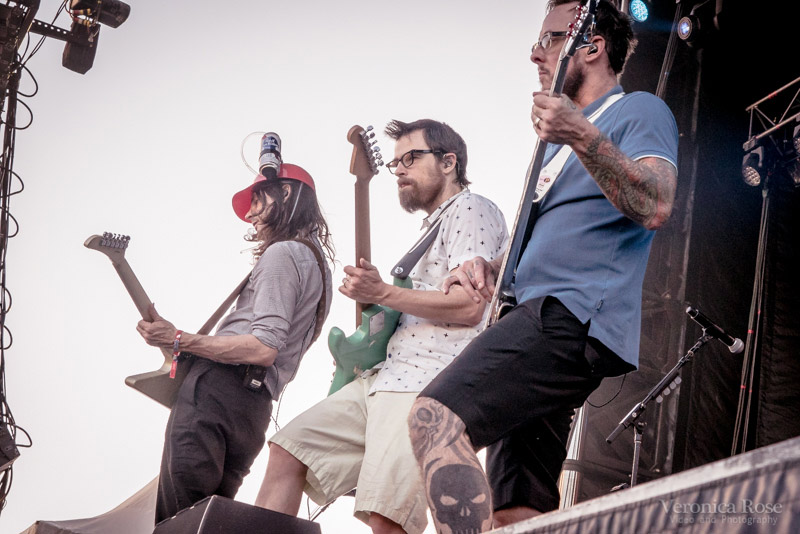 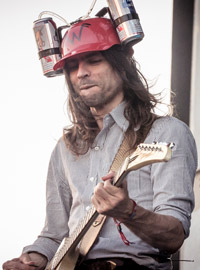 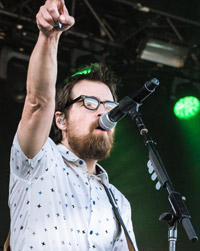 ruly saving the best for last, Weezer stole the show completely. Rivers Cuomo was conversant in his typical deadpan, announcing, “Hello Port-land, we are The Weezers!” The set was mostly singles, with standout performances of “Surf Wax America”, “Island in the Sun”, and “Hash Pipe”, finally closing out the night with all four band members on the drums during the outro to “Buddy Holly”. 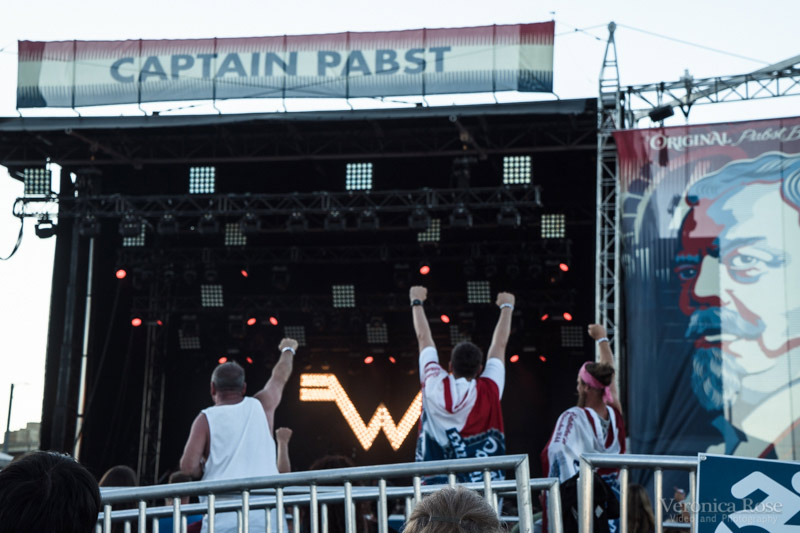 It was quite a sight to see a band that has been so excellent for so many years sharing festival space with a giant unicorn while bubbles float across the crowd – an image that will forever be etched in my memory as the closing of an excellent festival. With the way the sophomore episode of the Project Pabst festival panned out, it’s clear that Portland and Pabst will have a long musical history together. 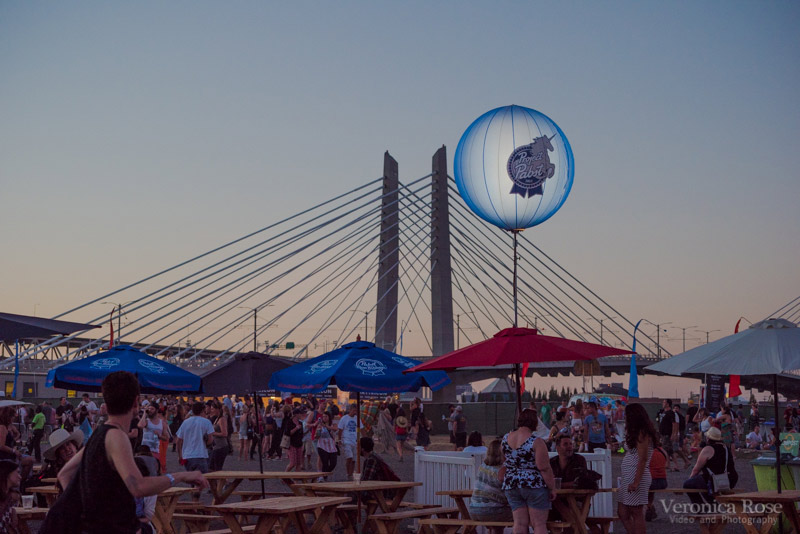