At its inaugural Project Pabst Atlanta, on Saturday, October 1st, Pabst Blue Ribbon (PBR) definitely brought the acts, the goods, and some extras.... 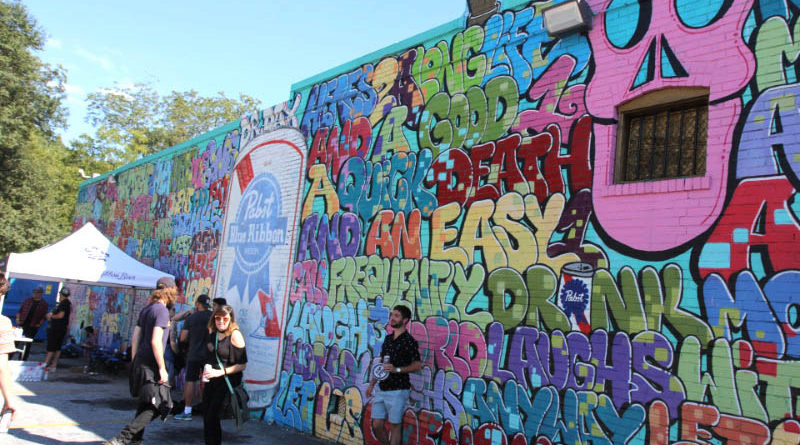 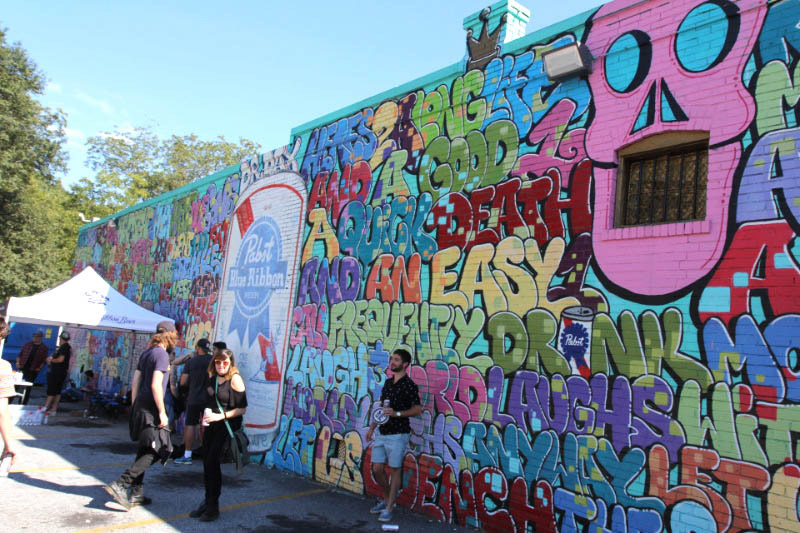 At its inaugural Project Pabst Atlanta, on Saturday, October 1st, Pabst Blue Ribbon (PBR) definitely brought the acts, the goods, and some extras. The day was sunny, warm but not hot, perfect weather in Atlanta, for the ever-present East Atlanta hipsters, in their home element, and all others who appreciated the artists performing, to enjoy dancing and drinking at reasonable prices. There was even bottled water from Kroger for the non-drinkers and street food, as well as all the restaurants being open. Extra unique attractions at the festival included the Project Pabst Unicorn and a van that attendees could spray paint. Between The EARL and Argosy was a U-Haul truck where bands performed in the back. There was also the PBRcade, with free old-school standup video games, next to restaurant-bar The Graveyard. There were two main stages, Captain Pabst, where well-known acts played, and The Unicorn stage, where indie bands played. Unfortunately, soul singer Charles Bradley cancelled his set due to finding out he has cancer. 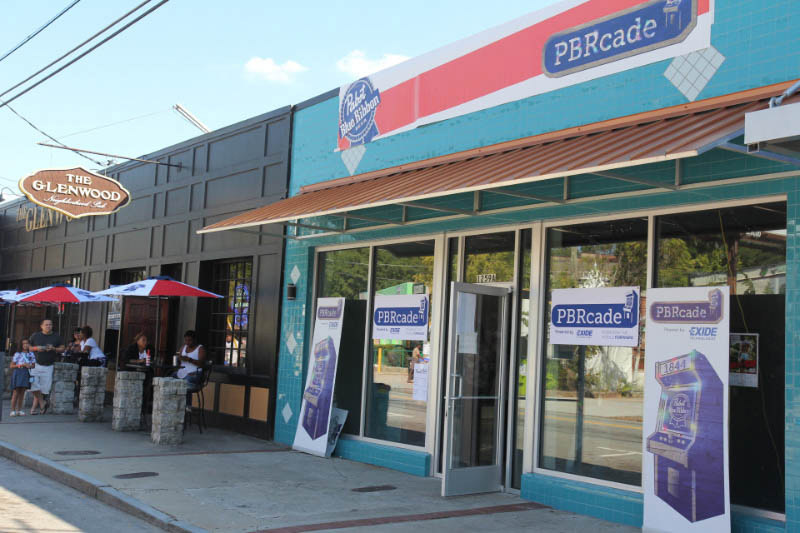 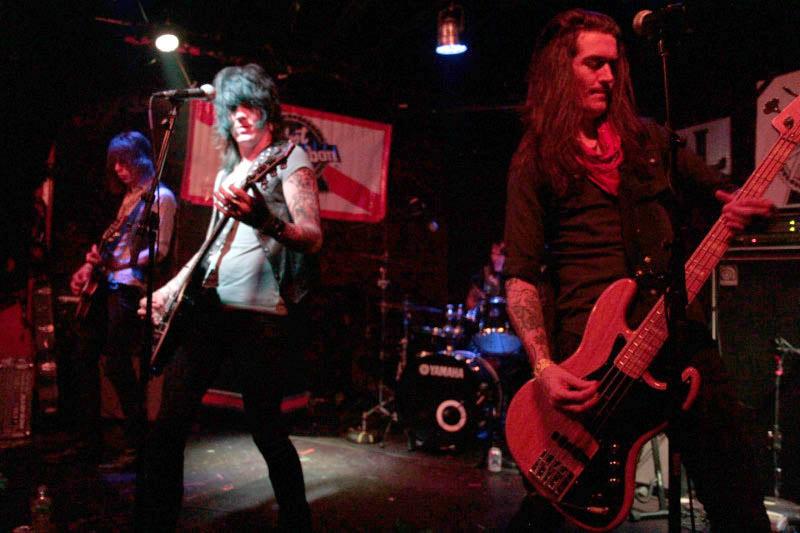 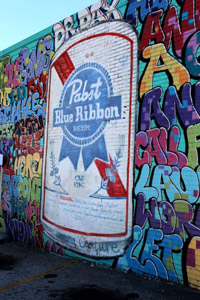 Atlanta’s own glam band Biters, who look like they time traveled to the 1970s and came back with shag hairdos, held court at The East Atlanta Restaurant and Lounge (EARL) as the first band that truly mattered on the day of Project Pabst. Rockers and barflies alike knew this, and had filled the EARL half full by the start of their midday set. Their sound was the thing that drew people in: a mix of old style and garage rock, where Thin Lizzy chords and harmonizing guitars dwell within. It was fantastic music to get the blood flowing at the venue that sports a story-tall PBR can mural on its side! 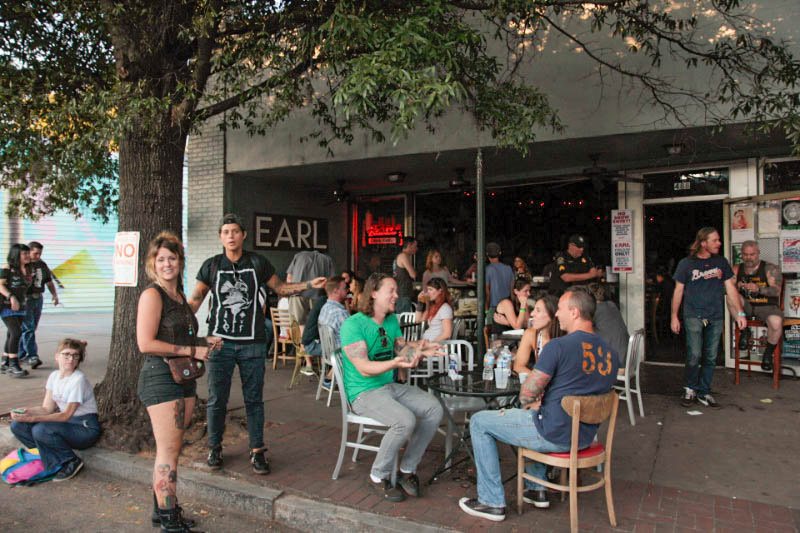 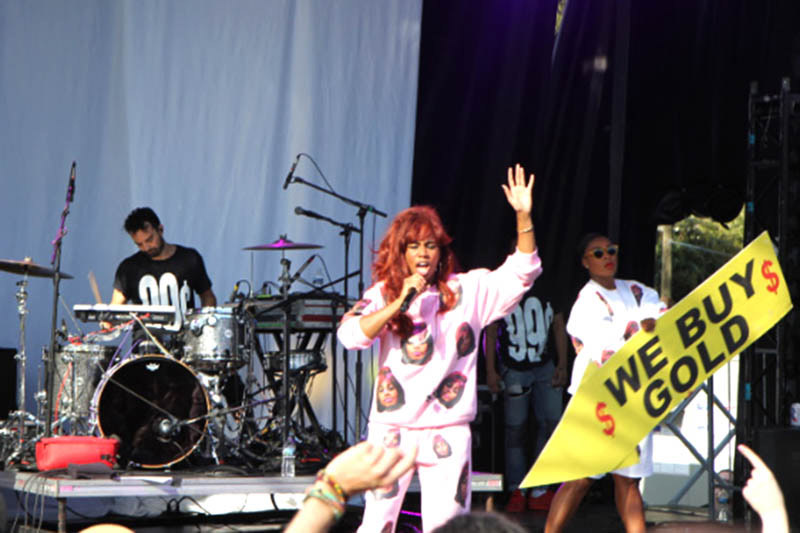 This talented lady Santigold, whose sound either mixed or alternated reggae and electro-pop, had hair from the 1960s, a cross between bad girl Ronnie Spector of The Ronettes (similar to Amy Winehouse) and the cool look of Tina Turner at her peak. She moved gracefully, mixing slow, soulful moves with synchronized dancing with two backing dancers, who did things like hold “99¢” signs, promoting her new album, 99¢. She had nearly everyone dancing and singing, getting the crowd started by telling them the choruses ahead of time, and getting close to people while singing. Her music was smooth but danceable, the occasional reggae touches well used to keep the beat going. Santigold’s charm and grace throughout her performance made it easy to become enamored by her. Most of the audience bounced and swayed to her wonderfully tunes that all could love. 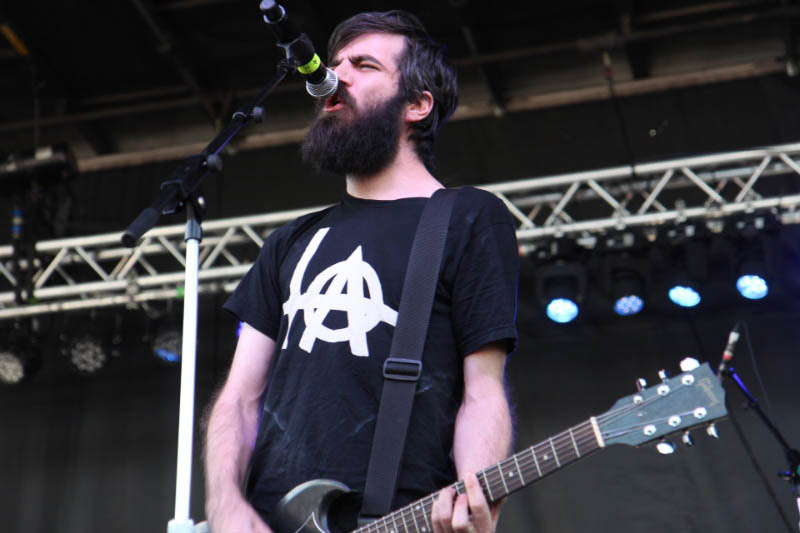 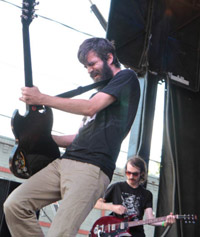 New Jersey’s Titus Andronicus always brings the party with their intense punk/indie rock and super intense long bearded front man, Patrick Stickles, who wrote a rock opera (The Most Lamentable Tragedy) about his battle with bipolar disorder. It’s obvious that Stickles fights his demons by throwing lots of energy into the band’s shows, which are full of songs referencing literary figures such as Shakespeare, who wrote the play the band is named after. The Titus Andronicus performance at Project Pabst showed intensity but also a sense of humor, as in when the guitarists and bassist did a short left to right synchronized dance, and then again when Stickles appeared to be driving an imaginary car in one song. This band will definitely keep people coming back for more good times ahead. 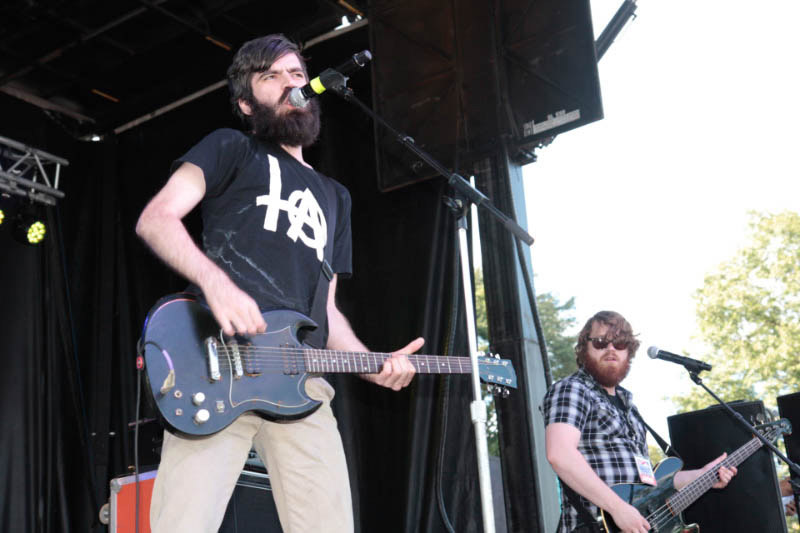 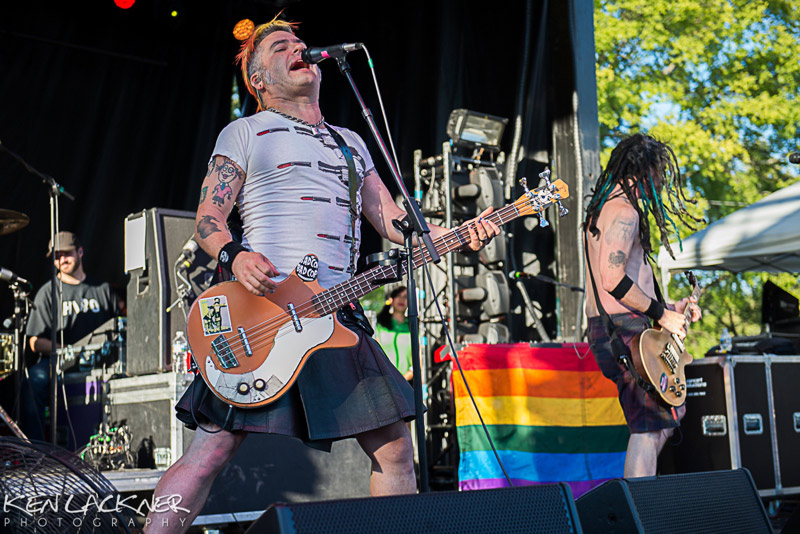 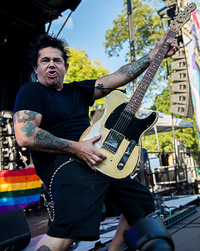 L.A. punksters NOFX had a much lighter approach to punk than The New Jersey punk preceding them. Their style of punk combined ska, skate punk and a kind of punk-lite that seemed pretty teen friendly. Lots of jokes and comments were made between songs, so much so that the show became a combination music and comedy show. The band had interesting looks to go with their interesting names (Fat Mike, El Hefe, an Eric Melvin and an Erik Sandin). Fat Mike was dressed in a black kilt, and the dread-headed Eric Melvin was shirtless despite being super white. El Hefe was very funny when soloing on guitar, sticking his tongue out quite a bit, and later did a great job of playing trumpet. Although a mixed bag, NOFX kept its audience entertained and some people dancing. 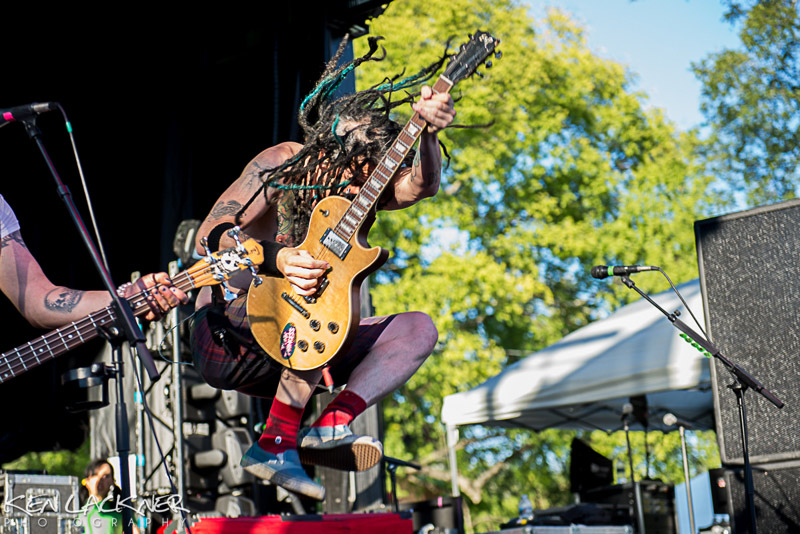 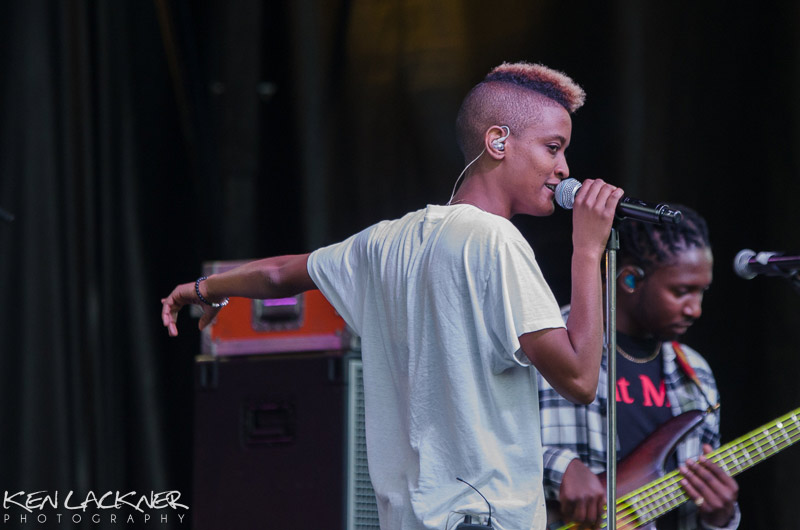 According to Wikipedia, “The Internet is a neo-soul band consisting of Odd Future members Syd Tha Kyd [singer] and Matt Martians [keyboardist-backing vocalist], as well as Patrick Paige II, Christopher Smith, Jameel Bruner, and Steve Lacy.” Syd Tha Kyd’s vocals were soft and slightly high pitched for an R&B singer, but fit well with her jazzy dance style. The Internet’s songs included confrontational lyrics about important relationship topics but there was also “a song for the ladies,” Syd Tha Kyd said, when starting a slower, romantic piece. The underlying music contrasted somewhat with the words: jazzy, sparkling keyboards, and smooth guitar, bass and drums. The band drew a large crowd who knew a lot of the songs and swayed and grooved along with the music. A highlight of the show was when the band sang “Happy Birthday” to an audience member named Shawty when prompted by another audience member. 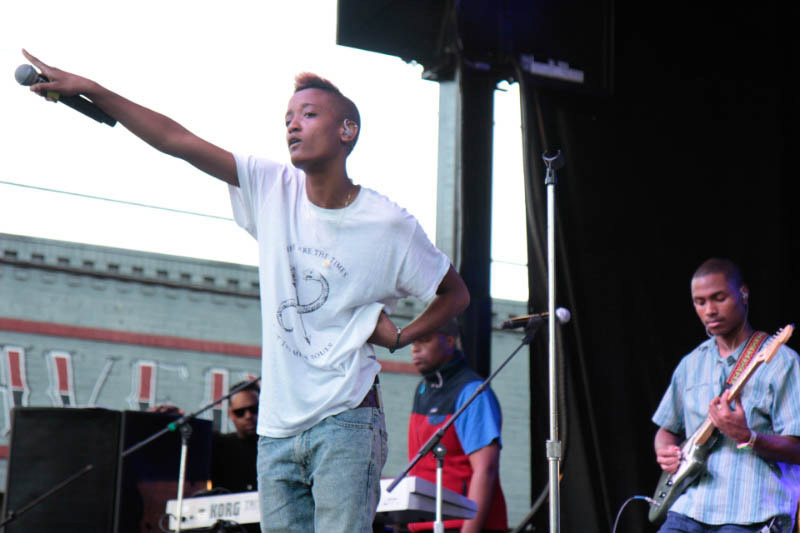 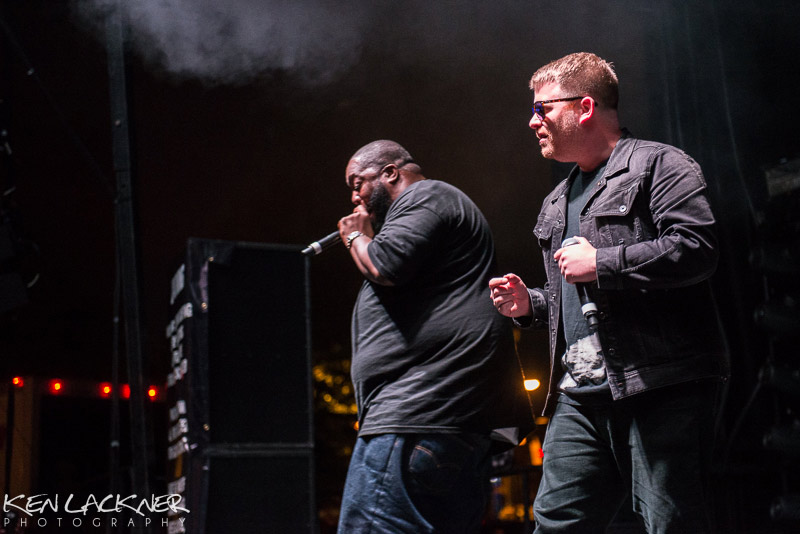 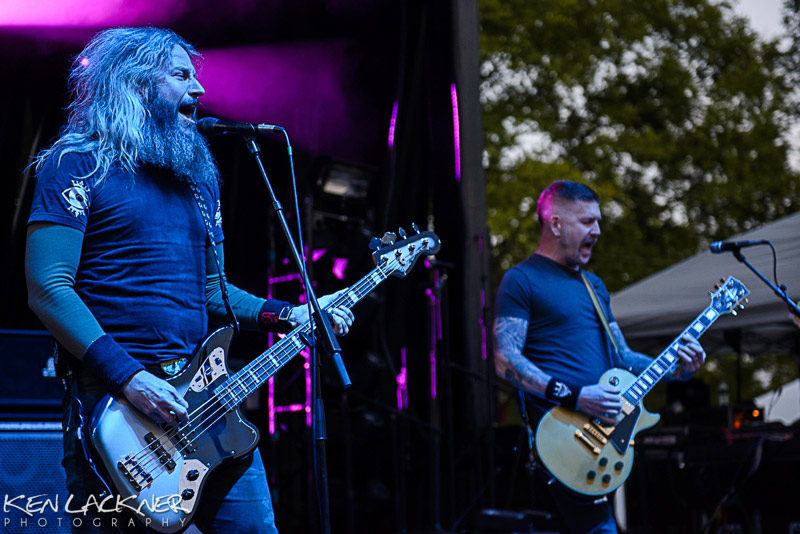 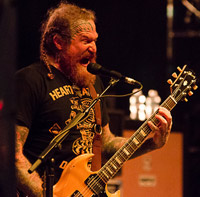 Mastodon is Atlanta’s best-known band of the 2000s. Their sound, prog-infused heavy metal which included double kick drumming, guitar noodling, hard rhythm guitar, and bass that fit nicely in-between was received well by the hometown crowd. Bassist Troy Sanders did most of the singing in his alternating harsh and smooth tenor, but guitarist Brent Hinds did a few songs and intros. Guitarist Bill Kelliher and Drummer Brann Dailor also joined on backing vocals and kept the great roar of the band growling. Despite their heavy metal leanings and desire to play hard, Sanders and Hinds showed they are nice guys. One of them asked the audience to quit throwing things after seeing someone get hit by an object. The band also asked for people to be on the lookout for “The Wolf” that they lost, likely a reference to the subject of a song. Hinds and Sanders had a great amount of stage presence and energy. Sanders was doing a lot of backward back arching, quite unique. Kelliher was up front with both of them and held his own by holding his guitar up during solos. In 2009, Rolling Stone named them “the greatest metal band of their generation.” On this night, they proved it with their outstanding performance. 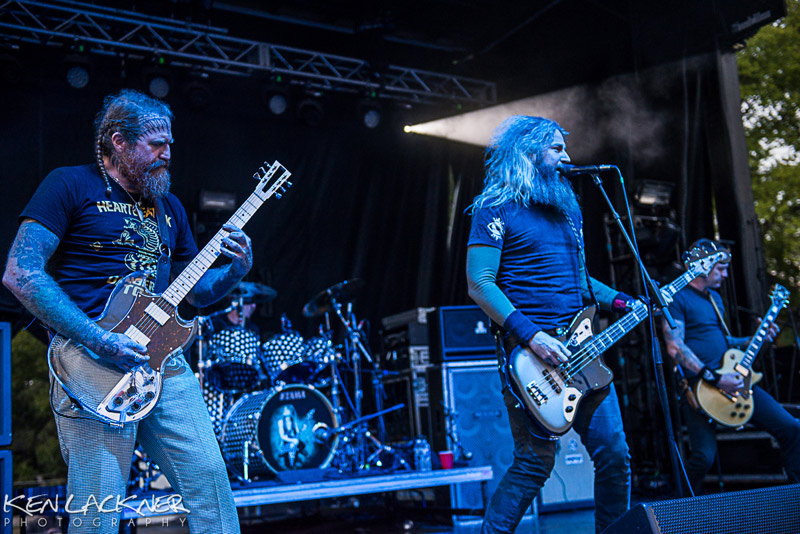 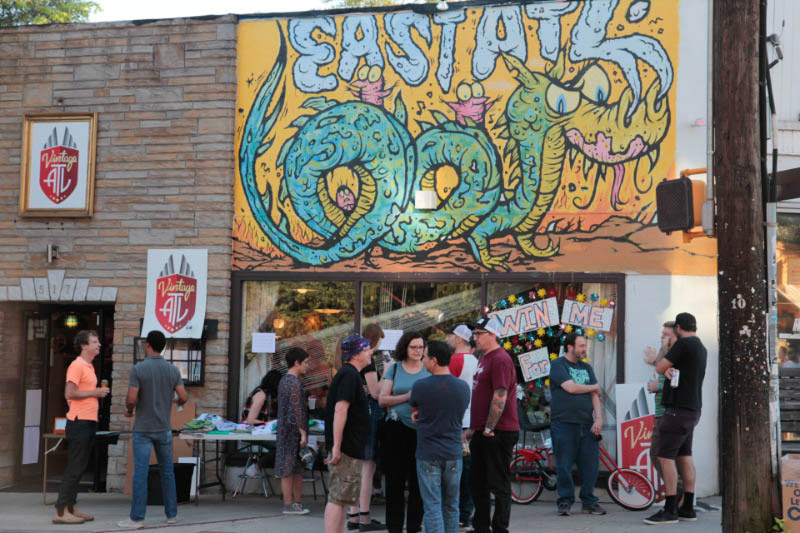 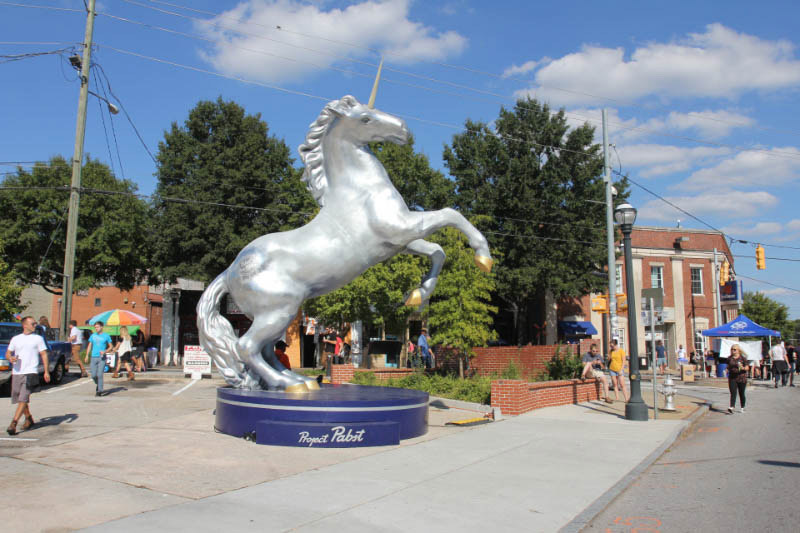