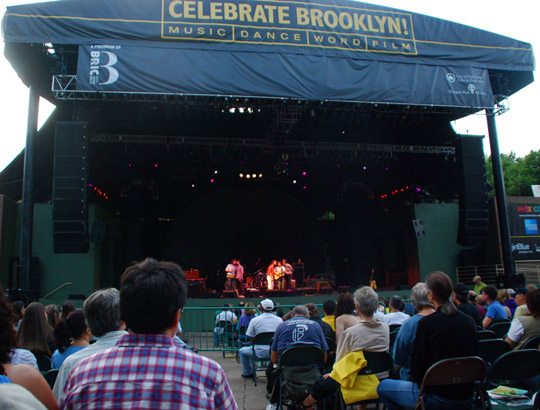 The entrance to Prospect Park Bandshell is on Prospect Park West and 9th Street.  Located deep within Brooklyn, Prospect Park was designed by Frederick Law Olmstead and Calvert Vaux after they finished Manhattan’s famed Central Park.  The park itself is a wilder version of Central Park, given more room to roam in Brooklyn, though much of the forested areas are fenced off.  Depression-era mayor Fiorello La Guardia appointee Robert Moses added the Bandshell in 1939, but it fell into disrepair in the sixties and seventies.  The Prospect Park Alliance and BRIC Celebrate Brooklyn! revived the Bandshell in the early eighties, with a major revamp in the late nineties.  Now BRIC Celebrate Brooklyn! holds concerts at the Bandshell during the summer.

There are actually two audience areas in front of the Bandshell, a 2,000-person seated area, and behind it, a 5,000-person lawn.  All together, it makes one of the largest venues in all of New York City, larger even than the Central Park Summerstage or the late McCarren Park Pool.  There’s a distinct slope down from all sides towards the front-center, creating a better view; spectators on the lawn often sit on their own blankets.  There’s usually a photo pit in the front; on free events, there’s often a reserved ‘VIP’ area at the very front.  Beer tents can be found on either side.

Most of the events held by BRIC Celebrate Brooklyn! are free (though they ask for a three dollar voluntary contribution), with a few paid events as benefits for the organization.  BRIC Celebrate Brooklyn! holds a mix of concerts, from fairly big-name acts to indie-rock, as well as world music and adult contemporary.  Usually, there is at least one free show from a well-known Brooklyn alternative act, and often at least one ticketed benefit with a large indie band.  While the events are relatively infrequent, the few that do happen are well worth attending. 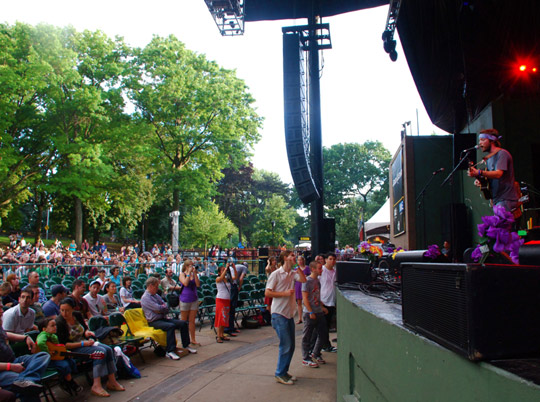