PS I Love You : Death Dreams 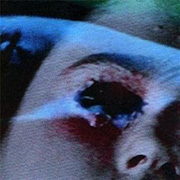 Following a sudden, gleaming response to debut LP Meet Me At Muster Station – see: Best New Music status on Pitchfork, an instant international fan base and festival slots alongside Death From Above 1979, Fucked Up and Elvis Costello – Kingston, Ontario duo PS I Love You were whisked on tour for what seemed like a never ending trek around the globe.  If anything, road weariness has added to their warm, hazy esthetique, and the layered sound on follow-up disc Death Dreams marks another strong effort for these Canadian wunderkinds.

Amidst the raging, riff heavy “Sentimental Dishes,” humming, heavy twang of “Don’t Go” and the atmospheric awesomeness of title track “Death Dreams”, PS I Love You rips up perhaps the biggest paradigm of their sound and others like it.  Although these tracks belong together under a hazy, rhythmic veil, the amount they vary from one another presents listeners with a wide-ranging rock-fest that acutely fails to run together.  It’s a journey you don’t realize you’ve taken until the rip-roaring hoopla on “Saskatoon” falls into the acoustic musings at the start “First Contact”, and then revs back up, as if sensing your displeasure.

Click here for photos of P.S. I Love You at NXNE 2014 in Toronto, ON, Canada in the QRO Concert Photo Gallery

Click here for photos of P.S. I Love You at 2011 Osheaga Music Festival in Montreal, PQ, Canada in the QRO Concert Photo Gallery

Click here for photos of P.S. I Love You at SXSW 2011 in Austin, TX in the QRO Concert Photo Gallery

Click here for photos of P.S. I Love You at QRO Magazine & Ampeater’s 2010 Northside Festival showcase in Brooklyn, NY in the QRO Concert Photo Gallery

“I wish this summer was like last summer” drones Paul Saulnier on “Future Dontcare” – with his frenzied riffs and frantic vocals on top of the furious, pounding percussion of counterpart Benjamin Nelson, it’s easy to draw comparisons to a number of fellow-Canucks like Japandroids and Wolf Parade (QRO live review).  To outright call them a culmination of Canadiana would be far too dismissive though, as the band is a startlingly unique entity.  It’s a hard shell to crack, and even harder to say whether this notion lays in their “less is more” attitude, the expansive sound at play here or the contradiction that arises from the combination on Death Dreams…

…Regardless, the duo has clearly found a sound well worth playing night after night, not-the-least-of-which means as solid sophomore record for the Kingston kids.