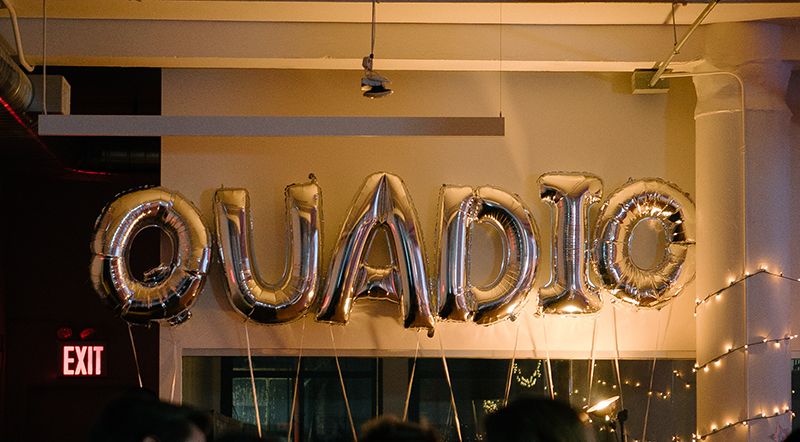 So much music comes out of the college years that ‘college rock’ was a genre title back when genre titles mattered. You might have found your music in high school or earlier, but your college years (whether you went or not) is when you actually had some taste, a mix of youth and even some wisdom. Plus, we all want to look back on our college days, and the music we listened to then can take us back, not aging like ourselves.

But this is the twenty-first century, when things are both easier than ever and tougher than ever, particularly in music, particularly for college-age musicians, who can get their music online, but so can everybody else, and thus struggle for any notice or to make it any farther. In comes Quadio, the “College Creative Network” that helps college kids who have “nowhere to go” to go farther in music. The social media platform & record label just launched its new app, and held a party in its NYC offices on Thursday, November 18th with its artists Rightfield, Zack Cokas, and Talia.

In addition to everything else COVID has messed up (like physically going to college), the pandemic put the kibosh on event parties, but they’ve slowly been coming back – open bars included. This event not only had Ebbs beer and Makku rice beer (the latter actually pretty good, in flavors Passionfruit & Strawberry), but also a food spread from SWIFT eats with wings & tacos. Even before the pandemic, not enough events included free food, and don’t worry, you needed to be vaxxed to even enter the building.

The event was college-themed, even if it had been many years since you’d been, and apparently even the college kids of today know of the Natty Ice. The Quadio crew was very friendly, approaching even your awkward correspondent [when he wasn’t pretending to be doing something important on his phone, or looking for a place to sit, but he was just reenacting his college years…]. And bonus points for a photo booth, beer pong, and free candy [your correspondent’s pockets were rattling from boxes of Nerds], even Jell-O shots at the end (because you haven’t had a Jell-O shot since college).

Quadio brought out three of their artists to their small acoustic stage set up. First was Boston University’s Talia (now in Brooklyn, because of course…), who did a touching performance that included her first-time ever playing “Super Rich Kids” (another facet of college). Then there was a sonic shift for the lively hip-hop of Zack Cokas, even when he was rhyming about mental health during the pandemic on “Pharmacy”. And finally was Rightfield, who shifted back to the touching acoustic, though noting that they would be playing different than their usual genre-bending ways, including their alt-hit “Gone”.

College is still very popular, whether it’s nostalgia or you’re attending (too popular, if you’re applying…). Quadio is there for you if you’ve got an .edu email address, designed to be a safe space for college kids (though couldn’t their professors also live out their rock god dreams?…).

[and QRO is there for a fellow Qer, as the letter has taken a pretty big hit over the last few years…]