There has been a lot of hype surrounding the new Queens of the Stone Age album …Like Clockwork.... 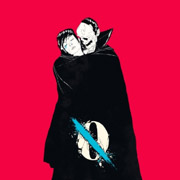 There has been a lot of hype surrounding the new Queens of the Stone Age album …Like Clockwork.  It was broadcast all over the internet from day one that it featured a reunion with the famous Songs For the Deaf-era drummer Dave Grohl, that Nine Inch Nails’ Trent Reznor was going to be involved “in some fashion,” that none other than Sir Elton John was also involved in some capacity, and that former bassist Nick Oliveri had also dropped by the studio, apparently to help with vocals.

Coupled with that this is the first Queens of the Stone Age album in almost six years, that sounds like the makings for one epic album, right?

Click here for photos of Queens of the Stone Age at 2014 Primavera Sound in Barcelona, Spain in the QRO Concert Photo Gallery

Click here for photos of Queens of the Stone Age at 2014 Hangout Music Festival in Gulf Shores, AL in the QRO Concert Photo Gallery

Click here for photos of Queens of the Stone Age from 2014 LazerFest in Boone, IA in the QRO Concert Photo Gallery

We need to tread lightly here because …Like Clockwork is still a decent, perhaps even good album.  In fact, it’s probably their best since Songs For the Deaf, but it simply does not live up to all of the hype.  Judging by everything that was reported leading up to its release, fans could expect the craziest, most hard-hitting “codeine cabaret” (lead singer Josh Homme’s words) drug trip through the desert-y thing they had ever heard.  Sure, the album is trippy at points, but it isn’t the punch in the face and kick to the groin that Songs For the Deaf was.  It’s more of a mellow arm around the shoulder.

Here’s a little disclaimer: now that it’s been specified who is ‘featured’ on which tracks, you will probably listen all the harder and be able to pick them out easier, but the point is that the Average Joe listener who may not have known otherwise would have no way of knowing these people are there.  When I first listened to this album I suddenly found myself at the end of it and thought, “Wait, wasn’t there supposed to be a vast array of famous guest musicians on some of these songs?”, and I actually had to go look up the information in order to find out for sure.

Perhaps the mistake is directly comparing …Like Clockwork to Songs For the Deaf, but naturally, it’s tough not to.  With Songs For the Deaf, there were several more up-tempo songs such as “You Think I Ain’t Worth a Dollar, But I Feel Like a Millionaire”, “First It Giveth”, and, of course, “No One Knows”.  Simply put, there aren’t any equivalents to any of those on …Like Clockwork in terms of tempo and severity.

Let’s recap: the album is good, but it is disappointing in light of the hype it received.  The bright side is that it’s a good measure better than a lot of the crap that sees the light of day in the music world these days.  …Like Clockwork gains points for that fact that it’s Queens of the Stone Age and that it’s a good album as a whole, but it loses points for simply not living up to the hype.  You might take the route of thinking, “It’s not Josh Homme and Co.’s fault that the beast that is the internet hyped this thing up so much,” but think again.  Homme the one that threw out quotes like the “codeine cabaret” one, and the group as a whole were the ones sending mysterious notes to magazines like Kerrang! inviting as much speculation as possible.  You do the math.