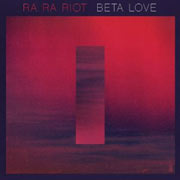 Ra Ra Riot is a band that you fell in love with.  Their uplifting but baroque indie-pop, starting with their 2007 self-titled EP (QRO review), made them fast favorites around the indie-sphere (including QRO).  They also had a tragically compelling backstory (death of drummer John Pike right when then they were breaking through), a great live show from early on (QRO review from 2007) – and some good-looking members, like singer Wesley Miles (QRO interview) and cellist/singer Alexandra Lawn (QRO interview).  So you weren’t asking for them to change with third full-length Beta Love – in fact, you were probably really hoping they wouldn’t (despite it being the first record since Lawn’s departure).  But they did, eschewing the up-baroque for the up-electro – but once you get over how much you loved them, you can fall in love all over again.

Click here for photos of Ra Ra Riot from Beta Love release party at Music Hall of Williamsburg in Brooklyn, NY on January 22nd, 2013 in the QRO Concert Photo Gallery

It should clearly be said that Beta Love will come as a shock to long-time RRR fans – opener “Dance With Me” feels like it’s from a completely different band, verging on the cheesy in its electro-pop.  The new electro continues in songs like the somewhat ‘Mr. Roboto’-ish “Binary Mind”, the brightronica single/title track, and on forward.  “Beta Love” in particular sounds like a track from Passion Pit (QRO live review) – but PP singer Michael Angelakos has always sounded like Miles in his higher-reaching range and higher-reaching attitude.  Even the sadder songs like “It Is Too Much” (which is their umpteenth song with “Too” in the title) have a different spin, and there’s also reduced to electro-rhythm pieces such as “What I Do For U” and “Wilderness”, plus even the nighttime eighties electro feel of “That Much”.

But give this record more spins, and you will be well rewarded.  The upbeat electro tunes like “Dance”, “Binary”, and “Beta” are all super-catchy, and that plus Ra Ra Riot’s positive outlook makes it so only the hipsterist of haters couldn’t fall for Love.  There is some interesting beauty on the sadder “Too Much” and “When I Dream”.  Even the less standout, more ‘standard’ tracks such as closer “I Shut Off” only feel ‘standard’ in terms of the ‘new Ra Ra Riot’.

The more one loves a band, the harder it is to accept the band changing – we’ll all probably be disappointed at first by the new Netflix Arrested Development episodes this May.  But Ra Ra Riot have also found a new way for you to fall in love with them, all over again.