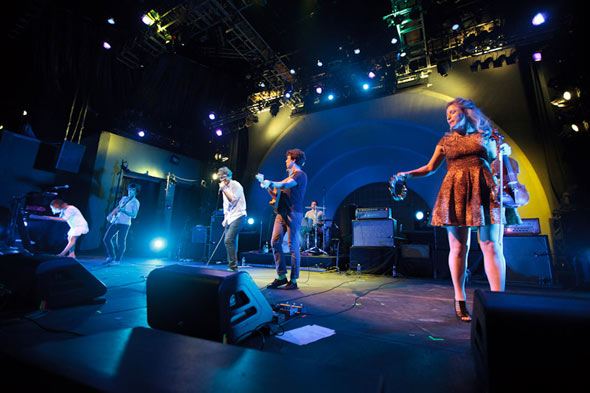 Click here for all of QRO’s coverage of Ra Ra Riot in ‘Spotlight On : Ra Ra Riot’ feature

Every summer in NYC, there’s one free, outdoor show that is a ‘must see’, even above the other ‘must see’s.  Last year, it was the August 5th performance by Metric (QRO review) at Prospect Park Bandshell – this year, it was the August 5th performance by Ra Ra Riot at Prospect Park Bandshell.  The Friday night show was a chance to celebrate, with the band how, just big and successful they’ve gotten, and appreciate that they haven’t lost what made them so special in the first place.

Prospect Park Bandshell (QRO venue review) was filled with boys and girls of various ages, from Park Slope parents there with toddlers in their arms (one mother was seen teaching her small child the ‘devil’s horns’ hand sign…), to elderly folks who’ve been staples in the community for decades 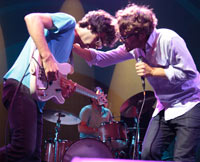 thanks to their rent-controlled apartments or townhouses bought long before the area was fashionable (including one old lady who was dancing up a storm, cane in hand).  Some members of Ra Ra Riot themselves are even locals, as singer Wesley Miles (QRO interview), joked, “I won’t tell you which direction, but some of you will be walking home with me tonight.”  Attendees were spread from the blankets on the lawn in the distance to the seated VIP area up front.  This is the first year that the Bandshell has had an actual photo pit, so, while photogs didn’t have to struggle their way through standing fans, said fans couldn’t watch from the very lip of the stage.  The show also began with the VIP area, and the regular area past it, still sitting, but a few songs in some eager fans began to stand at the photo pit barriers, and security didn’t move them, so many others joined them – plus practically all of the regular seated area was standing by the end of the evening. 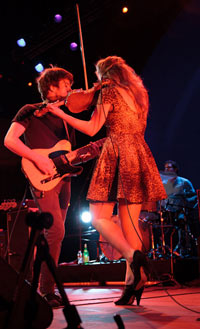 Still, the show didn’t get off to as fast a start as one would have hoped (jam-folk main opener Delicate Steve – QRO photos – didn’t help…), despite Ra Ra Riot beginning with “Too Too Too Fast” from debut LP The Rhumb Line (QRO review).  It was only with the third & fourth song in, Rhumb‘s “Oh La” and “Do You Remember”, that fans really began standing and the evening really began rocking.  But every time Ra Ra Riot moved into a slower, more beautiful song, some of the energy slipped – Miles even acknowledged this somewhat, by admitting that he shouldn’t have told everyone how amazing this show had been for the band right before the sad “The Orchard” (from their sophomore album of the same name – QRO review).  Still, none of those songs lacked for beauty, one standout being “You and I Know”, where cellist Alexandra Lawn (QRO interview) took the center stage mike (adjusting its height down before she started, and even politely returning it to its original height for Miles when she was done). 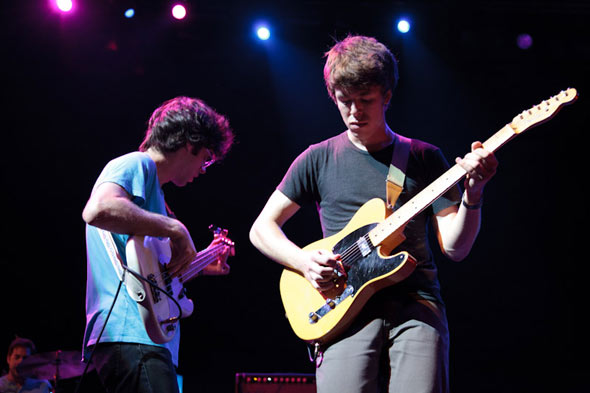 But, like with most outdoor shows, the highlights were the energetic numbers, more Rhumb than Orchard (like the albums themselves), such as “Oh La”, “Can You Tell?”, “Run My Mouth”, and especially back-to-back-to-back “Ghost Under Rocks”, “Too Dramatic”, and “Boy” into the encore break.  Miles did have trouble with his other mike, at the stage-right keyboards, at the start of “Mouth”, forced to use Lawn’s while he was there.  And whenever he sang from the keyboards, the focus of the show did shift to him & Lawn stage right, slightly off-putting if you were well on the other side (not that there’s anything wrong with stage left’s Milo Bonacci on guitar or Rebecca Zeller on violin…).  The band also hit up two covers in “their longest show ever” (though didn’t play Rhumb‘s Kate Bush cover of “Suspended In Gaffa”, or the two songs from their self-titled debut EP – QRO review – that weren’t on Rhumb, “Everest” & “Manner To Act”; have they outgrown them?), Tommy Sparks’ “Saccharin In My Mouth” mid-set (many probably thought it was a new song) and Steve Winwood’s “Valerie” when they returned from the encore break.  Miles introduced “Valerie” by saying they were, “gonna have some fun,” and encouraged those who knew the words to sing along, thought few did – but Delicate Steve’s Steve Marion came on stage-left to play the guitar solo, while Zeller switched stage sides to take up the prominent synths.  The evening closed with Ra Ra Riot’s great “Dying Is Fine”, which not only featured Miles doing his customary high-fiving of the crowd up front (in this case, Miles in the photo pit to those on the other side of the photo pit barrier – to be honest, that barrier did take away a bit from the show; there’s nothing like watching a band from right at the lip of the stage), but he also left the photo pit to go to the other side of the VIP area to high-five everyone at the front of the regular section, running the whole time. 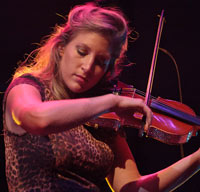 It must also be mentioned that this was Ra Ra Riot’s first NYC show with new drummer Kenny Bernard, who replaced Gabriel Duquette at the start of 2011 (Duquette left after the band performed on Jimmy Kimmel Live – QRO Indie on Late Night TV – to teach drum lessons in the Hartford 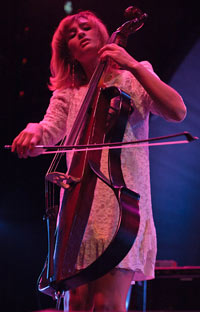 area).  Duquette had been the first stable replacement for original drummer John Pike, who tragically drowned in 2007, just as the group was taking off.  Bernard provided a meatier presence on the drums, but it seems like Miles borrowed Duquette’s horn-rim glasses…

Also, Lawn – one of the top ‘indie-crushes’ out there, just after Metric’s Emily Haines (QRO solo album review) – had a new haircut.  Which is more important?… 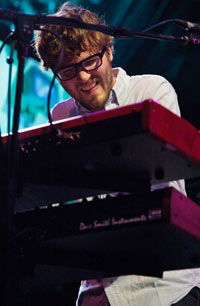 As the worldwide economic crisis grinds on – and on – New York’s free summer fare has felt the hit, especially in 2011 with even government budgets tightening (gone is the stimulus, in is the debt limit…).  River-to-River’s shows at South Street Seaport (QRO venue review) were knocked down to four this year (and the Fourth of July show at Battery Park – QRO venue review – was no more), while The Village Voice replaced its big Coney Island Siren Festival (QRO recap from last year) with the much smaller 4knots (QRO photos) at the Seaport this year (Ra 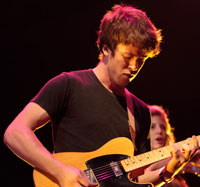 Ra Riot themselves played Seaport back in 2007 – QRO review).  And the post-McCarren Park (QRO venue review) Pool Parties of Williamsburg Waterfront (QRO venue review), plus last year’s new Gone to Governors on Governors Island (QRO venue review), didn’t return.  Indeed, next weekend’s Music To Know Festival on Long Island was just cancelled (and Ra Ra Riot themselves were supposed to play it – QRO preview of what would have been).  But there have still been standouts this season, like catching tUnE-yArDs getting big (QRO photos) at Hudson River Park (QRO venue review), or the opening (QRO photos) of the new Beekman Beer Garden.  And the ‘must see’ was clearly Prospect Park Bandshell’s great show by the great Ra Ra Riot.