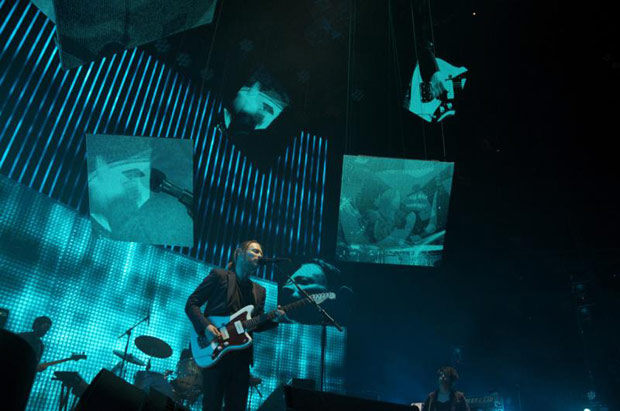 After an all day bout of rain, Downtown Kansas City Missouri was covered by a light mist and the phosphorescent glow of the Power and Light District carried the promise of Radiohead. Last Sunday night, droves of mostly bearded, button-up shirted, 30-somethings descended on The Sprint Center for a sold out show.

Oklahoma’s own Other Lives began their set promptly at 7:30pm. Radiohead’s vast layout confined the band to not much more than a 10×10 region in the center of the stage. Basked in the deep red stage lights, Other Lives did their best to showcase an expansive sound in a limited time and area. The cosmic pallets of texture that made up their set seemed inspired by vast open spaces. The sound was one that would feel at home in a salt flat, or with the giant red rocks in Arches National Park in Utah. It’s hard to be spectacular when opening for Radiohead, as you are committing the sin of not being Radiohead, but Other Lives was solid if unspectacular.

They wrapped up at 8:00pm sharp to a warm thank you from the crowd, which had nearly doubled in size over the course of the 30 minute set. When the pre-show music resumed, it was no longer serene samba. The house speakers now cranked out industrial techno beats. Looping grooves from Actress rained down on the crowd as the finishing touches were put on the stage that would soon hold Thom and co. 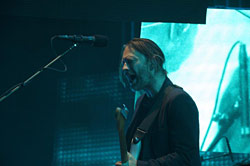 The lights went down and samples of Yorke’s wailings began creeping out like phantasms. The band took to the stage and began the opening glitterings of "Bloom". Joining the normal crew of Thom Yorke, Jonny Greenwood, Ed O’Brien, Colin Greenwood, and Phil Selway was drummer Clive Deamer of Portishead. The benefits of having two drummers were apparent right from the get go as stammering complicated rhythms clambered through the air.

Clive’s presence through the night was a reminder that with Radiohead the needs of the song trump the needs of the band. Greenwood rotated through instruments like a kid in a candy store, but this kid is calm and exacting in his decisions and the execution of his ideas. He sat at a small drum kit for "Bloom", diligently churning out the same stuttering pattern. But it’s not a waste of a phenomenal guitarist to sit him down at a glorified toy drum kit- if that’s what the song needs. The rhythmic complexity of many of the new tracks is such that a second drummer is needed? Somebody call up Portishead and see if we can borrow Clive.

That’s the kind of care and attention to detail that a performance of this nature must require. It was even evident in the stage itself. The band played in front of two layers of light boards, one that resembled a row of unbelievably long fluorescent light bulbs that stretched to the ceiling, and directly in front of that a wall of what looked like bubble wrap that reached half as high. Suspended above the band were about 10 large video squares. The squares were suspended by cables and rearranged for nearly every track. Each board had a different camera feed on it, each showing a different close up aspect of the show- be it Thom’s face or Greenwood’s fingers. At times the boards would be lowered to create a faux ceiling about 6 feet over the band’s head, basking them in warm light. During these ‘ceiling sets’ it was as though we were watching a studio session. The maneuverability of these video boards gave the set real diversity form track to track. 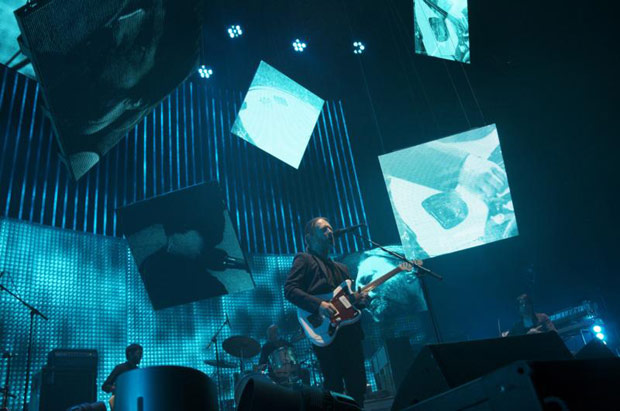 It was surprisingly tricky to distinguish old songs from new ones. Despite the fact that tracks from each of the bands albums have a distinct feel, the nights setlist had an overwhelming sense of familial belonging. Seeing tracks like "Feral" and "How to Disappear Completely" performed back to back makes it clearer how such different sounds can come from the same brains.

Really the only foolproof way to pick out the older tracks from the newer ones was to gauge the reaction of the crowd. Kansas City seemed a bit more familiar with the more senior bits of the Radiohead catalogue as the crowd was most audible during tracks like "Lucky", "Idioteque" and last minute addition to the setlist "Myxomatosis". Newer tracks like "Super Collider" and "Identikit" were greeted with less acquaintance but just as much energy. The performance of "Identikit" was curious enough on it’s own. Beginning with a misstep from Clive Drearer that required a restart, (to which Yorke responded by introducing him to the crowd) it only got stranger when halfway through the song the house lights suddenly came up. Adding to the odd series of events was the fact that prior to playing "Identikit" Yorke told the crowd that it had been "a very random day for the band".  Random indeed. 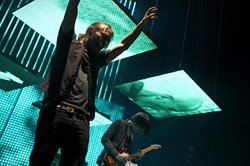 Yorke was his usual delightfully creepy self, twitching around the stage, dancing with the crowd, and wailing like a ghost in a lighthouse. At times it seems as though the different parts of his body are each moving to a different part of the the rhythm. When the live vocal loops of "Give Up The Ghost" were winding through our ears I couldn’t help but think about how terrifying a choir of Thom Yorkes would actually be.

Thom’s antics are well documented. Greenwood’s musical proficiency is common knowledge, the talent of the band is no longer news, it’s just what we’ve come to expect from Radiohead. It’s what everyone that’s been to a Radiohead show will tell you. These guys are amazing. The show will have "Morning Mr. Magpie" squirming through your brain for weeks. But it’s more than the things we already knew about Radiohead that made the show so special. It was the feeling of comfortable unease that flowed through "Pyramid Song". It was the paranoid energy of "Idioteque". It was the glorious reveal of the chorus in "Lucky". It was that intangible fervor embedded in every moment that will keep Kansas City eagerly awaiting another visit from Radiohead. 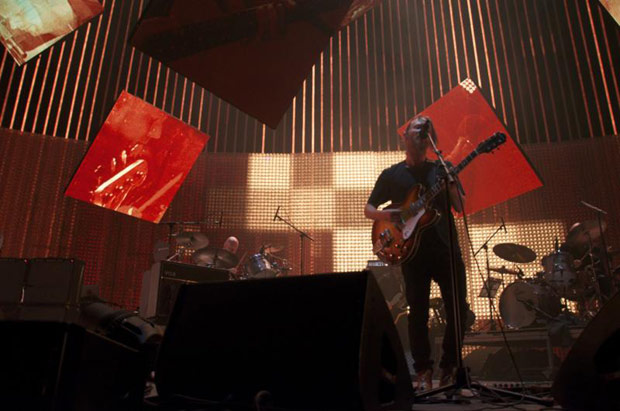