<img src="http://www.qromag.com/wp-content/uploads/2010/06/rahrahbreakinghearts.jpg" alt=" " />The fiery Canadian seven-piece has returned with their second full-length album, and it's anything but a sophomore slump. ... 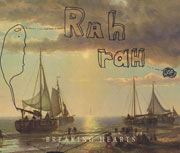 Regina’s Rah Rah first materialized onto the Canadian music scene some five years ago, to what was some sadly lacklustre initial fanfare.  Rah Rah’s calm progression is surprising considering the explosiveness that accompanied their first full length, 2008’s Going Steady.  That album saw a blend of delightfully unpredictable alt-rock with an unorthodox instrumentation, as well as some captivating pop inclinations.  Crashing violin crescendos, roaring guitar riffs, booming percussion and poppy piano hooks all bolstered Going Steady, pushing it to a place on the proverbial list of the best albums you’ve probably never heard of – 2008 edition.  But thanks to the growth of a burgeoning Saskatchewan music scene, as well as some glowing reviews from the Canadian blogosphere, the band has slowly but surely been growing and developing into a powerful prairie collective, complete with an ever-multiplying fan base.  On the heels of some long overdue acclaim, the fiery Saskatchewan seven-piece has returned with their second full-length album, and Breaking Hearts is anything but a sophomore slump.

Whereas Going Steady was littered with stand-alone singles, this latest effort is a more about the big picture.  Producer Kees Dekker (Plants & Animals) guides the band towards an album that is more about the united output than each individual track.  The result?  A sprawling array of ballads that flows like every album should.  While no songs stand out quite as much as Going Steady‘s "Fuck NAFTA" or "Tentacles", "Arrows" kicks this new record off on a reminder of their magnitude.  Breaking Hearts pounds through its first few offerings – which desperately make you want to get up and move – before revealing Rah Rah’s most notable improvement.  While their more upbeat songs are simply a continuation of Going Steady, their softer material is anything but.  "Beaches" thrives in a certain ghostly ambiance, seaming in and out of an ethereal promise, while "Hurt Me Bad" builds and falls in a lovely atmosphere of moody alt-rock.  The album fades on "Parkade", which also showcases the influx of ambiance amidst the band’s softer songs.  Though Breaking Hearts can be a little cabaret at times – on "Communist Man" as well as "Waltz" for instance – and runs just a bit too long, it is an overall solid album that should see Rah Rah break some of the barriers that Going Steady was initially unable to crack.