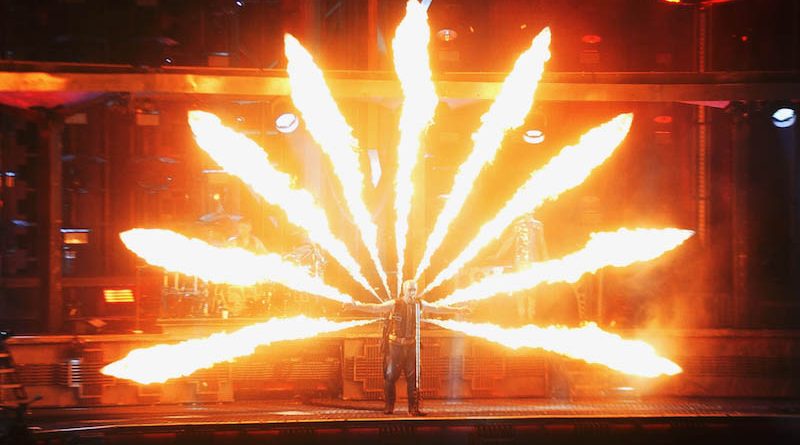 Ok, just kidding about that last bit but it truly cannot be overstated what a magnificent spectacle a Rammstein show is. Since 1994 the German metal outfit have been a driving force in not just their respective genre but also the music world at large. I first came across the band the same way most Americans have; as a teenager who stumbled upon their music video for “Du Hast”. The strange combination of visuals and sounds of that video still echo today, and as the years have gone on have witnessed from afar how Rammstein dramatically pushed the envelope of the live music world with their theatrical live shows.

On Tuesday, September 6th, the band played at MetLife Stadium in East Rutherford, NJ, their first show in the area in well over a decade and their first stadium tour throughout the U.S.. What they brought to MetLife was a masterclass of keeping an audience thrilled and engaged with live music. From the gargantuan stage design, to moments of silliness that added further dynamism to the live show. Moments like guitarists Richard Kruspe and Paul Sanders playfully knocking down their mic stands while posing for the audience, keyboardist Christian “Flake” Lorenz jogging on a treadmill while wearing a glittery suit, and frontman Til Lindemann continuously making faces towards the camera while singing aggressively without breaking a sweat. Basically; a lot happens at a Rammstein show, and it easily ends up being an experience you can’t compare to anything else.

What stood out the most, apart from the brilliant production design, was how important the flow of the bands setlist was. No disrespect to the genre, but to refer to a Rammstein show as solely a metal show disregards the variation that was at display that night.

Songs like “Deutschland” and “Sonne” harkened to the bands playful sensibilities, with the latter showcasing Lindemann’s talents as a singer with an operatic bravado. Lastly, a major element that can’t be ignored is the stamina that was at display that night amongst all six members of the band. For these men in their 50s to be performing at the level they’re at is truly unprecedented, especially when you consider the dramatic pyro technics and the two-plus hours of the set. This evening proved in many ways why Rammstein are a band that are well-respected worldwide.

Made In America Festival Photo Gallery