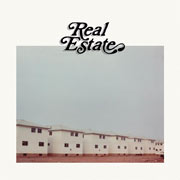 Real Estate’s music is the perfect soundtrack to autumn fuzziness and humidity.  It has that nostalgic, vintage feel that evokes suburban landscapes seen through childhood memories.  It’s as if Martin Courtney, Matthew Mondanile and Alex Bleeker (a.k.a. singer/guitarist, guitarist and bassist of Real Estate) who have known each other since they were kids, remembered their New Jersey school Days through the magic of their music.

Two years after their brilliant self-titled debut they’re now back with a new lineup (Jackson Pollis of Your Nature/Frankpollis – QRO live review – replaced Etienne Pierre Duguay on drums, and Jonah Mauer joined the band on keys and guitar) and new album Days.

Click here for photos of Real Estate at Webster Hall in New York, NY on August 11th, 2012 in the QRO Concert Photo Gallery

Click here for photos of Real Estate at Koko in London, U.K. on February 21st, 2012 in the QRO Concert Photo Gallery

Click here for QRO’s review of Real Estate at The Garage in London, U.K. on October 19th, 2011

Their sophomore record sounds brighter, crispier, more polished, mainly thanks to a better production made possible by their switch to bigger label Domino Records:  it was recorded with Kevin McMahon (Titus Andronicus, The Walkmen) in a converted barn in New Paltz, NY, and then finished over a five-month period.  Days is more complex and multifaceted, showing more maturity both lyrically and musically, and more emotional density, but somehow it has the same laidback, evocative sound of its predecessor.  You can still find the same winning formula of jangly, jammy guitars, hazy, melancholic vocals, and the continuous flow of reverb and delay that make every song feel like a psychedelic dream.

The album opens with “Easy”, a carefree ode to outdoor lazy afternoons with friends, tempered by the sweet sadness of Courtney’s voice that here as well as on the rest of the record is cleverly kept slightly in the background, almost to soften things and give them a hazy vibe.  “Green Aisles” is more meditative, offering a poetic reflection on suburban youth: “All those wasted miles / All those aimless drives through green aisles / Our careless lifestyle, it was not so unwise / The houses were humming all through the night / The winter was coming but that was all right.”

Vampire Weekend (QRO live review)-esque lead single “It’s Real” is their fastest and catchiest song to date, with a more traditional verse-chorus-verse structure and an uplifting, chanting wordless chorus that will get stuck in your head for Days.  It’s followed by entirely instrumental “Kinder Blumen”, which offers a pleasant, suggestive intermission after the first three songs, and the highly Shins (QRO live review) derivative “Out of Tune”, another pop ballad about the uncertainties of youth.

The second half of the album gets a bit repetitive and is not as strong as the first, but it just keeps you in the same poetically laidback mood.

“Three Blocks” has beautiful, reflective lyrics: “Monday morning / Dirty sidewalks / Waiting for me outside the door / Walking slowly / Up those three blocks / Things won’t be like they were before… All those people all around me / Were they strangers or was it me?”  “Younger Than Yesterday” is clearly an homage to the Byrds (if only just for the title) as much as to Neil Young.  The album then closes with “All the Same”, their longest and jammiest tune to date, reaching seven-and-a-half-minutes length.

Days is another little gem of hazy surf rock.  It’s exquisitely casual and endearingly unpretentious.  It doesn’t try to impress, it doesn’t feel the need to be anything else.  And in that lies its beauty.

Pop Will Eat Itself