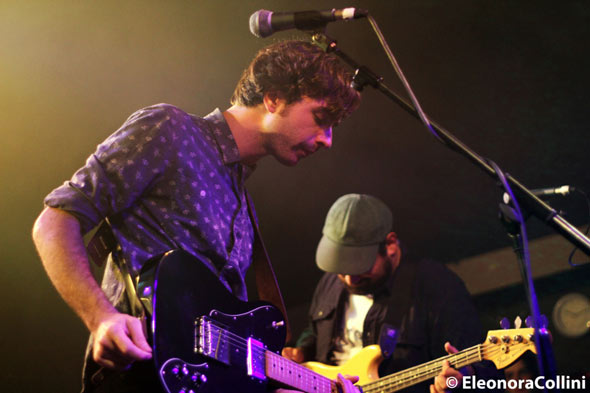 After the warmest October in years, London weather eventually turned rainy and gloomy.  That just provided the perfect backdrop for the sold-out Real Estate + Twin Sister show at The Garage, London on Tuesday, October 19th.

At first these two American bands don’t seem to have much in common apart from being both from the East Coast (Real Estate are from New Jersey, Twin Sister from Long Island) and now signed to Domino Records.  Real Estate make hazy surf-rock with a psych-jangly vibe, Twin Sister chillwave-indie pop.  But somehow they’re both the perfect music to face autumn weather with a chilled out, slacker smile on your face.  So this double bill gig couldn’t have fit the foggy, humid London better.

In front of a mainly early-mid twenties crowd, shoegaze-y London dream-pop Trailer Trash Tracys set the mood playing some tunes from their upcoming debut album Ester, which seems to have the same nocturnal, sublime atmosphere of some David Lynch’s movies. 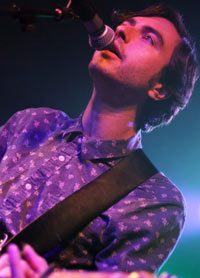 Click here for photos of Twin Sister at Echoplex in Los Angeles, CA on July 27th, 2010 in the QRO Concert Photo Gallery

Then Twin Sister took the stage.  First thing to notice was that oddly none of the band members had a set list, which along with giving them high kudos for their good memory, proved how these young guys know what they’re doing.  Compared to other dream-pop bands, Twin Sister have a more complex, dense instrumentation, perhaps due to that they are five members rather than the duo/trio formation typical of the genre (see Beach House, Best Coast, or Au Revoir Simone, to just mention a few).  Their debut album In Heaven is a huge step forward compared to their (good enough) two EPs Vampires With Dreaming Kids and Color Your Life (QRO review).  Drawing from different genres, from retro-disco to travelogue-happy indie, and of course dream-pop, they made the right step towards a more distinctive sound, mainly thanks to the versatile dreamy voice of Andrea Estella.  Compared to their records where it seems to change quite a bit from song to song, Estrella’s voice is more uniform live and sounds more like something in between Satomi Matsuzaki from Deerhoof (QRO photos) and Yuki Chikudate from Asobi Seksu (QRO album review).

Still fresh from the release of In Heaven, the Long Island quintet played the album in almost all of its entirety.  Highlights were the disco “Bad Street” with its continuous cheep of “beep, beep” and its repeated lines, “Bad house, bad street / Big hands, big feet,” the poppy second single “Gene Ciampi”, personal favorite “Kimmi In a Rice Field”, and “Stop” where Estella duets with guitarist Eric Cardona.

Real Estate, with their evocative hazy jangle rock and suburban nostalgia, were the real stars of the night.  They just released their sophomore album Days, which features a new lineup (Jackson Pollis of Your Nature – QRO live review – replaced Etienne Pierre Duguay on drums and Jonah Mauer joined the band on keys and guitar) and has a more complex, multifaceted, crispier sound (partially due to a better production, thanks to their switch to bigger label Domino), but is in the same laidback, jammy mood of its predecessor.

On stage they’re charmingly casual, just like their music.  They don’t talk much, they don’t impress with any virtuosity but still they fully, brilliantly capture your attention all the way through.  The sweet, melancholic sadness of Martin Courtney’s hazy vocals is cleverly kept a bit in the background (on stage as much as on record), over jangly guitars and a continual wash of reverb and delay that make every song feel like a hazy, psychedelic dream.

They opened their set with a slightly shorter version of the instrumental “Kinder Blumen” and then carried on playing all the songs from Days but “Three Blocks”.  Crowd went totally crazy during “It’s Real”, probably their best song to date with its softy chanted vocals and terribly catchy, uplifting guitar lines, and fans favorite “Beach Comber”, that along with “Suburban Dogs” and “Fake Blues” were the only songs from their self-titled debut album played at the show.  Other highlights were the more meditative, suburban ballad “Green Aisles” and the clearly Byrds-esque “Younger Than Yesterday”.  After playing eleven songs, the band left the stage for a couple of minutes to then come back with a sweet encore: Matthew Mondanile took on vocalist duties for a lovely cover of Felt’s “Sunlight Bathed the Golden Glow”, before Courtney concluded the whole set with the beautiful “Fake Blues”. 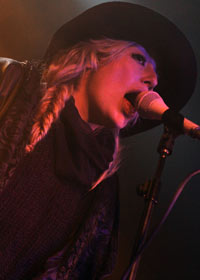