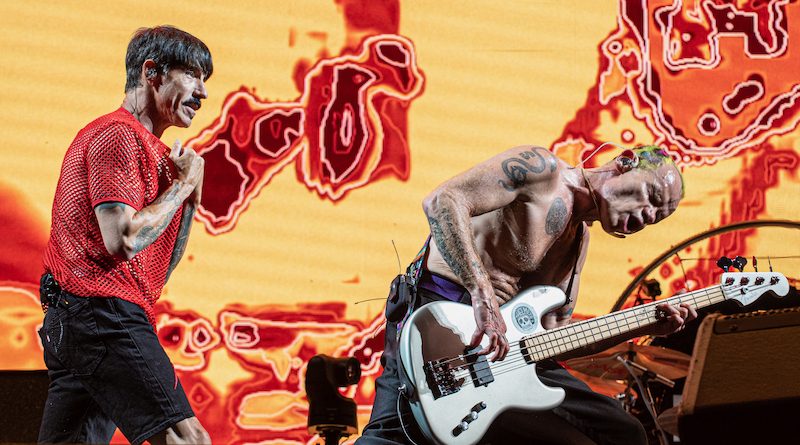 The night began with a bang – literally. Chad Smith, with his ever-present backward baseball cap and sweat bands, started off the concert by banging a huge gong, to the delight of the 40,000+ fans who came out to Atlanta’s Truist Stadium on a balmy Wednesday night, August 1010th, to see the Red Hot Chili Peppers in their fourth decade of performing.

Beginning with a wickedly funky jam, courtesy of Flea’s unique slap bass technique, the playing then morphed into a “red hot” version of “Around the World” (from 1999’s Californication), as Anthony Kiedis appeared, resplendent with his “pornstash,” red, net t-shirt and shorts embellished with a lightning bolt, delivering the lyrics with his signature hip-hop infused cadence.

The band then moved on to “Dani California”, from 2006’s Stadium Arcadium, with ponderous guitar riffs from John Frusciante, on his third tour of duty with RHCP. Frusciante has the chops to keep up with Flea, Smith and Kiedis, while somehow making khaki pants and a polo shirt look cool. As RHCP took a trip back to 1999, with “Scar Tissue”, one began to realize the sheer number of hits these men have produced over nearly 40 years of play.

The Chili Peppers may have an impressive assemblage of hits, but they are certainly not living only in the past. The band played four songs from their recently released album, Unlimited Love, produced by Rick Rubin. This included “Aquatic Mouth Dance”, “These Are The Ways”, “The Heavy Wing”, and “Black Summer”, all of which were well-received, though not quite with the same enthusiastic response as some of their chart-toppers.

A shirtless Flea, with his hot pink and yellow leopard-spotted hair, served as the night’s “host” greeting the crowd, and doing most of the night’s talking between numbers. Flea is as charismatic, fit, and energetic as ever, and his funk-infused bass is, in many ways, the foundation of the Chili Pepper’s sound.

Though a bit more subdued than Flea, Kiedis was still in great voice, looking much more youthful than his fifty-nine years would indicate. He sounded as good as he has throughout the decades and held the crowd’s rapt attention throughout the night, particularly when they returned their older repertoire, including “Suck My Kiss” and “Give It Away” from 1991’s Blood Sugar Sex Magic and from 1989’s Mother’s Milk, “Nobody Weird Like Me”.

RHCP kept the crowd-pleasers coming, including “Snow (Hey Oh)” and “Tell Me Baby”, from Stadium Arcadium and the title track from Californication.

The Chili Peppers briefly left the stage, but the audience brought them right back with their fervent cheers. They began the encore with “Sir Psycho Sexy” (Blood, Sugar, Sex, Magic), but took a bluesy turn with a soulful cover of Robert Johnson’s “They’re Red Hot”. The Red Hot Chili Peppers ended the night with 2002’s “By the Way”, then the enduring, Funkadelic institution left the stage, on to the next stadium.