<img src="http://www.qromag.com/wp-content/uploads/2009/06/reginaspektorfar.jpg" alt=" " />In following up her break through success of <i>Begin To Hope</i>, pop virtuosa Regina Spektor straddles extremes and turns them into a devastatingly beautiful genre... 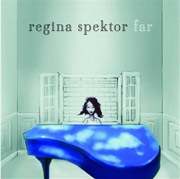 Pop virtuosa Regina Spektor was placed in a curious position following her 2006 release, Begin to Hope.  The effortlessly enchanting collection of songs cemented the Russian-born singer-songwriter’s spot as an indie stock artist and took her from underground limelight to the often-harsh scrutiny of mainstream audiences.  But Ms. Spektor’s challenge with her new release, Far, did not lie in trying to top the five-single release on the charts, but rather in deciding which way to tip the musical scales that the songstress was left between after Begin to Hope’s commercial success: back to her roots of bare-bones, experimental sound like self-produced releases 11:11 and Songs, or forward to hone her newfound talent for writing sugary-sweet radio hits.  Rather than submitting to either extreme, in some sort of musical transubstantiation, Spektor has taken what could have been fan betrayal and disappointment and turned them into a devastatingly beautiful genre contradiction.

Far may lack the organic quality that Spektor’s earlier work had, but that does not make it any less personal.  The songs maintain astonishing familiarity, giving listeners the impression that they are sharing her piano bench.  A polished, shiny veneer present on this latest release feels like an accomplishment rather than a sell-out, and gives the same kind of pride one might feel for a dear friend.  Although Spektor worked with a slew of accomplished producers (Mike Elizondo, Jackknife Lee, Jeff Lynne and David Kahne), she maintains the personal style that dates back to her days of self-production.

First track, “The Calculation,” is a skillfully planned hook, line and sinker to the album.  The bright, bouncy melody, in true fashion to the songwriter, is a contrast to the darker subject of a troubled and naïve young couple.  Scrubbed, buffed and re-recorded versions of B-side, bootlegged fan classics “Folding Chair” and “Dance Anthem of the 80s” also make an appearance on the album, boasting a result not necessarily unfamiliar but certainly more marketable.  Premiere single, “Laughing With” errs dangerously close to falling into a formula, sounding like a ‘typical’ Regina Spektor song, a label that she has neatly sidestepped until now.  This is not to say that Spektor’s intention was to become a sales pitch.  Despite this brief bout of predictability, Far keeps both charter fans and Begin to Hope newcomers on their toes.  Her signature Russian vocal sconces are liberally featured, along with the awkward, but endearing, intentional sour notes and animal noises.  Spektor remains a bit of a challenge for mainstream audiences to swallow, but her masterfully crafted piano melodies fuse smoothly with often brassy vocals, making the hard accessible, and the accessible a smart cut above the norm.  Even in the absence of lyrics, Spektor’s heartfelt piano compositions could precisely depict songs’ meaning.  With evident classical training, she has made a melodic collage of stages of her training, incorporating the new piano riffs characteristic of synthesizers and keyboards of today – the true style of a conservatory drop out.

The true worth of Regina Spektor’s work is her rewards for her listeners.  It is easy to take her songs at face value, and while they are certainly worthy of looping over and over in your brain, there is something more to be discovered below the surface, and listeners will receive exactly what they are willing to give to the album.  Much like folk pioneers in the 1960s, painstakingly simple songs were often the most prolific of the time, and with Regina Spektor acting as the Joan Baez for the anti-folk scene, the investment for Far is well worth the benefits.

Aeroplane Pageant : Even the Kids Don’t Believe Me