Note: Due to investor issues, Rehab closed its doors after February 28th, 2009.  It may reopen.

Rehab is located on 25 Avenue B, Manhattan, between 2nd and 3rd Streets.  It’s in the Lower East Side, but, along with Lit Lounge, is just north of Houston Street and the Bowery, which is home to such venues as Mercury Lounge, Cake Shop, and Piano’s, not to mention Bowery Ballroom.  It was until recently known as Club Midway, before that it was Scenic, and before that it was Guernica and Save The Robots.

The ground floor of Rehab is bar; the actual venue is downstairs.  The downstairs is relatively thin, but not as much as Bowery downstairs venues like The Cake Shop, with the stage on the other end, somewhat to the house-left.  The bar is located to the house-right, with stools and ledge on the back house-left side giving way to a larger stage floor with couch-benches against the wall.  The area is rather darkly lit, with most of the light coming from either the bar, the stage, or a series of neon-like strips on the walls and even floor (note: sometimes they delineate a step up; other times, they do not).  Rehab is sort of stuck between two worlds: it’s a basement venue like such low-scale Bowery haunts as The Cake Shop, but done up more professionally than even the higher-scale Mercury Lounge, yet the stage is only a step or two above the ground.

Rehab’s size and set-up practically invites the crowd to hang farther to the back.  The somewhat random line-up of lesser acts doesn’t help much, either, as it doesn’t encourage people to stick around for the next, or show up early for the previous.  Not being as skuzzy a venue as some of the Bowery haunts meant a higher class – or at least more attractive group – of people, however, and the drinks are less expensive than the set-up.  Not an ideal place to see a show (and seriously one of the lamest names ever for a club), but nice for a change.

25 Avenue B, Manhattan (Between 2nd and 3rd Streets) 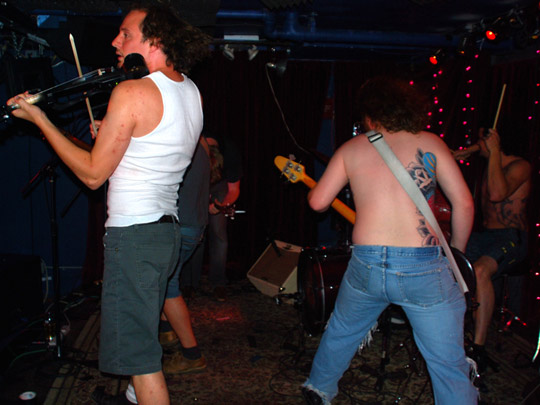