<img src="http://www.qromag.com/wp-content/uploads/2011/03/remcollapseintonow.jpg" alt="R.E.M. : Collapse Into Now" />Past in tow, the journey continues for one, if not <u>the</u> greatest alternative rock bands of all time. ... 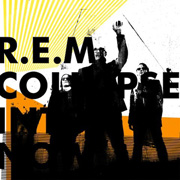 For one of, if not the greatest alternative rock bands of all time, R.E.M. has certainly faced their fare share of criticism.  Early on, it was for ‘going mainstream’ – i.e., leaving original indie imprint IRS for major label Warner Bros. for 1988’s Green; then it was for the ultra-ubiquity of sophomore Warner release Out of Time, especially singles “Losing My Religion” and “Shiny Happy People”.  But, after the departure of drummer Bill Berry in 1997, the critique was from the other end of matters: that albums like 1998’s Up through 2004’s Around the Sun weren’t accessible enough, too distant & philosophical.  That all got turned around in 2008, where, after some killer post-hiatus shows at The Olympia in Ireland (QRO live album review), they put out Accelerate (QRO review), which had the kind of energy that the band had been lacking since Berry’s departure.  So where is the trio with the ‘follow-up to Accelerate’, Collapse Into Now?  A bit all over the place, and a bit much like previous incarnations, but still the iconic R.E.M.

Collapse opener “Discoverer” mostly just builds and builds, and one might think that this is the intro for Accelerate II: Electric Boogaloo, but Collapse is a more diverse record.  Not that there are moments of Accelerate energy, such as “All the Best”, “Mine Smells Like Honey”, “Alligator_Aviator_Autopilot_Antimatter”, and “That Someone Is You”, whose up-tempo alt-rock press forward without being over-catchy.  However, there are also pieces of real sadness, such as “Überlin”, “Oh My Heart”, and “Me, Marlon Brando, Marlon Brando and I”, plus brighter numbers, like “It Happened Today” & “Every Day Is Yours To Win”, and one where you can’t tell which side of the coin it falls, “Walk It Back”.

One thing that is readily apparent to any R.E.M. fan are the moments on Collapse that sound very much like older R.E.M. moments.  Only “Oh My Heart” is truly obvious about it, as singer Michael Stipe slips into the title line from Accelerate‘s “Houston” before slipping out again – but if “Heart” is meant to be the sad sequel to the Katrina-inspired original, it’s too maudlin by half (just look at the title).  “Überlin” starts like “Sidewinder Sleeps Tonight” from 1992’s Automatic For the People, and “Every Day” sounds like an Automatic song as well.  Meanwhile, closer “Blue” (written with Patti Smith” has a distant, distorted Stipe reminiscent of “Low” or “Belong” from Out of Time – however, those are overlooked pieces on a relatively critically underappreciated record.  And “Marlon Brando” isn’t the missing partner to Automatic‘s past Hollywood heroes homage’s “Man On the Moon” (Andy Kaufman – gave title to the later Jim Carrey biopic) and “Monty Got a Raw Deal” (Montgomery Cliff), but is more like the winsome & heartbreaking final days of Brando-worshiper Mingus Rude from Jonathan Lethem’s Chronic City.