<img src="http://www.qromag.com/wp-content/uploads/2010/08/remfablesdeluxeedition.jpg" alt=" " />The R.E.M. record most in need of a re-discovery gets its deluxe edition release. ... 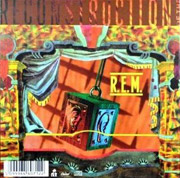 Universal has been re-releasing R.E.M.’s early records from their period on independent label I.R.S. on their twenty-fifth anniversaries, first debut Murmur (QRO deluxe edition re-release review) in 2008, then sophomore LP Reckoning (QRO deluxe edition re-release review) last year, but now it is EMI that is re-releasing the alt-icon’s third full-length, Fables of the Reconstruction.  Hardly hard-to-find in its own right (and was already re-released with bonus tracks in 1992), this Fables ‘deluxe edition’ contains unenlightening demos from the band’s time in their hometown of Athens, Georgia, before they traveled to London to make the record.  However, Fables ‘proper’ is maybe the album most in need of another look throughout the storied band’s storied discography.

Though recorded in London, Fables was loosely focused around the idea of the South – but also leaving the South.  While "West of the Fields" might have been on Murmur, it is the wild, unkempt fields of the South, of autumn adolescence everywhere that is amazingly evoked on Fables, those hills and valleys that were hardscrabble farm country a century or two ago, but now are overgrown with occasional patches of forest and the odd remains of a fence that you could find wandering outdoors during summer break, which have now been converted into suburban track housing or strip malls (or, in today’s world, foreclosed mini-mansions and shuttered commercial property).  "Maps and Legends" sees you lost in the fields, "Life and How To Live It" & "Can’t Get There From Here" running around in those fields, "Old Man Kensey" details the slightly spooky old man of your old town, while "Driver 8" recollects the occasional train that’d whiz on by, coming from & going to who knows where, but getting there fast.  And wistful ‘Another Side’ (the label of side two on the vinyl original, after ‘A Side’) pieces like "Green Grow the Rushes", "Kohoutek", "Good Advices" and "Wendell Gee" play like memories of lost lands, loves, homes and neighbors (respectively) – R.E.M.’s own How Green Was My Valley.

Fables of the Reconstruction was also a sonic shift by R.E.M., more embracing an alt-country/folk side that the band doesn’t get enough credit for having done so early, long before today’s alt-country boom.  There’s the up-tempo numbers like "Life" & "Can’t Get There", haunting great outdoors in "Maps and Legends" & "Old Man Kensey", pushing forward on the tracks with "Driver 8" & "Auctioneer (Another Engine)", wistful winds to "Green" & "Good Advices", and more.  And opener "Feeling Gravity’s Pull" reaches heights both angular and atmospheric.

On the deluxe edition re-releases of Murmur & Reckoning, Universal included a live recording of one show, top-to-bottom, on the tour that followed each record’s release.  Unfortunately, the bonus disc for Fables that EMI put together is just demos that the band did in Athens of every song on the album, plus "Hyena" (from the following Life’s Rich Pageant), "Bandwagon" (b-side to "Can’t Get There From Here", included on both b-sides collection Dead Letter Office & the 1992 Fables re-issue), and "Throw Those Trolls Away" – a renamed "When I Was Young", which was listed on the original track listing for Fables and played in the pre-release ‘Preconstruction’ tour, but abandoned by the time of Fables, only to be reworked later for Pageant as "I Believe".  While all versions are technically new, all are also unleveled, some severely so, and they provide little insight into the album.

Fables of the Reconstruction has always been a bit of a redheaded stepchild in the R.E.M. discography, even in their beloved I.R.S. years – not an early classic like Murmur or Reckoning, nor a later-period getting greater & greater pre-major label album like Life’s Rich Pageant or Document; not even a neat going away (from I.R.S.) gift like greatest hits collection Eponymous or b-sides collection Dead Letter Office (each one of the greatest collections of their type, ever).  The band, recording away from home for the first time ever, was reportedly unhappy with the process & the finished output, leaving it overlooked even by those many fans that profess to like I.R.S.-era R.E.M. the best.  But it’s got some of the band’s most interesting & memorable pieces – "Feeling Gravity’s Pull" could fit into any era of R.E.M., "Wendell Gee" is just as singular & special as the man, up-tempo & down-tempo alt-country R.E.M. are front and center, and "Driver 8" maybe be the greatest R.E.M. song ever (in your correspondent’s opinion – but also believes that the song is really in reference to the elementary school science & math teachers’ descriptions of the speed of light & infinity, by talking about a train going at that speed…).  While EMI could have, and should have done better with the bonus material, what’s important is that everyone who likes R.E.M. knows how great Fables of the Reconstruction was.