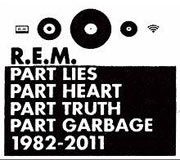 On September 21st, R.E.M. shocked the world when the iconic, legendary alternative rock group announced that they were breaking up.  They also announced the upcoming release of Part Lies, Part Heart, Part Truth, Part Garage 1982-2011, the first full-career greatest hits record by the band.  Part doesn’t make up for break-up, it naturally misses some of the band’s many, many greats, and if you’re an R.E.M. fan already you probably don’t need it – but I come here to praise R.E.M., not to bury them.

At forty tracks over two discs, Part certainly goes from the beginning to the end – from IRS records debut EP Chronic Town to this year’s final studio record, Collapse Into Now (QRO review).  It is the first release to contain both songs from their IRS days (1982-1987) and at Warner Brothers (1988-2011), something that had actually been sorely missing – previously there were only Warner-only or IRS-only compilations, and they all stood in the shadow of the first compilation, 1988’s excellent Eponymous.  In addition to averaging just over two tracks for each of their seventeen studio albums, there are also two non-studio releases and three new songs.

As with any career-spanning greatest hits record, Part includes the ‘greatest hits’ – hit singles like "Radio Free Europe", "so. Central Rain", "(Don’t Go Back To) Rockville", "Driver 8", "Fall On Me", "The One I Love", "It’s the End of the World as We Know It (And I Feel Fine)", "Orange Crush", "Stand", "Pop Song 89", "Losing My Religion", "Shiny Happy People", "Man on the Moon", "Everybody Hurts", "What’s the Frequency, Kenneth?", "Electrolite", "Imitation of Life", "Leaving New York", "Supernatural Superserious", "Oh My Heart", and more.  And as with any career-spanning greatest hits record, Part has some excellent gems that were never singles, such as "Gardening at Night", "Sitting Still", "Life and How To Live It", "Finest Worksong", "Country Feedback", "Nightswimming", "Living Well Is the Best Revenge", "Alligator_Aviator_Autopilot_Antimatter", and more.  Also as with any career-spanning greatest hits record, Part has to skip countless great songs, such as everything from Chronic Town that not on the compilation, "Talk About the Passion", "little america", "Maps and Legends", "Cuyahoga", "Disturbance At the Heron House", "I Remember California", "Texarkana", "Ignoreland", "Star 69", "How The West Was Won and Where It Got Us", "Walk Unafraid", "Houston", "Me, Marlon Brando, Marlon Brando and I", and many, many more.

The weighting of the record isn’t perfect, with a few too many newer songs – didn’t need three from Collapse or more than one from the lesser records between 1992’s seminal Automatic For the People and 2008’s comeback Accelerate (QRO review) – but perhaps this will give an idea to older R.E.M. fans who lost interest after drummer Bill Berry left in 1997 what the band has been doing since then.  Albums with more hit singles get more space on Part, but this also leads to neglect of any great non-singles on those albums (massive Out of Time – i.e., "Losing My Religion", "Shiny Happy People", etc. – particularly has some overlooked gems on a record now considered ‘too commercial’ – i.e., too successful – by many fans, but thankfully at least great non-single "Country Feedback" is included).  Longer albums get more space than shorter ones, but it could really only include one of Chronic‘s five amazing songs.  And the chronological order makes it slip as the album goes on, especially on the second disc (which begins with Automatic and goes downhill from that height – though does include all the non-studio album selections), but it does give a nice sonic arc to such a long career – the mixing of albums might work for a band around for less than a decade like Pavement (QRO greatest hits review), but not one as long-lived as R.E.M.

Part includes two previously released non-album tracks, "The Great Beyond" from the Man On the Moon soundtrack, and "Bad Day" from In Time: The Best of R.E.M. 1988-2003.  The spacey-but-building "Beyond" probably wasn’t necessary, as Part already has "Man On the Moon", the Andy Kaufman tribute song that pretty much launched the biopic, but the catchy "Bad Day", a reworked version of an old song, would probably not be heard otherwise, as no one’s going to buy In Time, the last of the one-label compilations, after the release of Part.  But what about something from Dead Letter Office, their 1987 b-sides & extras album that might be the best b-sides & extras album ever (how about "Voice of Harold", which featured singer Michael Stipe making up new lyrics to "7 chinEse bros." by reading the back of a record?)?  Or what about including "Radio Free Europe (Original Hib-Tone Single)" from Eponymous, which "crushes [the official Murmur version] like a grape" (Stipe)?

Part closes with three completely new songs from aborted post-Collapse recording sessions, "A Month of Saturdays", "We All Go Back To Where We Belong", and "Hallelujah".  While none are epic or match the greatest hits preceding them, "Saturdays" is fun, while "Where We Belong" and "Hallelujah" are swayingly nice codas to an epic career.

Stipe, guitarist Peter Buck, and bassist Mike Mills may now be joining Berry in retirement, but they’ve left a legacy that is virtually unmatched, as the greatest alternative rock band in history.  You don’t need Part Lies, Part Heart, Part Truth, Part Garage to tell you that, but it does sum up the band quite nicely.

MP3 Stream: "A Month of Saturdays"