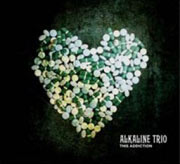 Alkaline Trio’s emo-punk had settled into something of a saddle point on 2008’s major label debut, Agony and Irony (QRO review), pleasing to both camps, if not overwhelming, and not annoying to those outside, more just decent.  After everyone who signed them at Epic left the company, the band left the label, and formed their own joint operation with Epitaph, Heart & Skull, and new record This Addiction feels more ‘independent’ – not in an ‘indie’ way, but in that the group is really doing what they want.  And it makes for an enjoyable catch-punk release.

Title/lead-off track/single “This Addiction” lives up to its placing by summing up/introducing the record nicely.  It’s a little obvious, a little lacking in subtlety, but definitely enjoyable – something that can be said about This Addiction as a whole.  At its best, the album delivers wonderfully enjoyable choruses, such as on “Lead Poisoning”, “The American Scream” and “Eating Me Alive”.  It even lifts the two between that last pair, the workingman’s punk of “Off the Map” and the sway of “Draculina”.  And everything on the record is, at worst, nice enough that you don’t mind hearing it.

But this is still some relatively mainstream emo-punk, and can certainly get cheesy.  Indeed, “American Scream” and “Eating” are both weighed down from greatness by that, in ham-fisted politics on the former (think Green Day’s American Idiot), and a ‘song for the dumped’ on the latter.  “Dead On the Floor” is the dump-cheese without “Eating”‘s catch, and the record slides somewhat at the end, especially in closer “Fine”.

While Agony and Irony would please Alkaline Trio fans, and not put off the emo-haters, This Addiction steps it up on both fronts: sure to be a hit amongst those who know & love them, and even the worst of hipsters can’t help but find themselves humming along at times.