Anya Marina – Queen of the Night

Marina makes beautiful music all her own, with the overstuffed 'Queen of the Night'.... 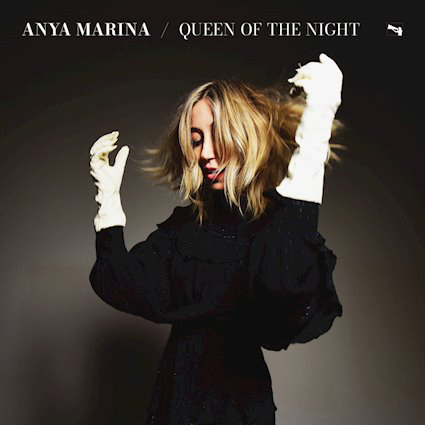 Last year, singer/songwriter Anya Marina released her hilarious web series Indie-pendant Woman, where she plays an idiot version of herself trying to make it in the music industry as an independent artist.  Awards for the series followed, even opening for comedian Nikki Glaser on a tour earlier this cut short by the COVID lockdown.  While yes, she’s very funny, Marina also makes beautiful music all her own, with the overstuffed Queen of the Night.

Made up of songs compiled over the last handful of years, as well as some covers, the fourteen tracks of Queen might be a bit more than necessary, as the record is sweet and touching throughout.  The growing, soaring emotion of the titular opener could be a contemporary pop hit (think Florence & The Machine), but then later Marina spins around and turns Taylor Swift’s “The Man” into a stripped, tragic, and intimate piece.  There are many moments where Marina is wry, such as the relaxed “Last Word” and kiss-off “Pretty Vacant”, but others where she plays her swing-sway more straight-up, like the wonderful “Broken Bottles” and her cover of Solomon Burke’s classic “Ain’t Misbehavin’” (QRO review).

Hopefully someday sooner rather than later, Anya Marina can get back on the road (with comedians or without) to bring her whole personality to the audience – she is doing a release day livestream.  Night showcases why she is a sweet Queen.

The Shins – “The Great Divide”