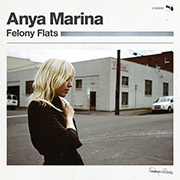 San Diego’s Anya Marina has made her bread-and-butter getting her songs featured in countless TV shows (as well as the soundtrack for film Twilight: New Moon – QRO soundtrack review), but she’s also had those old-fashioned ‘albums’.  For Felony Flats, the singer/songwriter introduces a little electro and darkness for a more interesting sound.

There’s a sly, almost sexy/sultry element that runs throughout Felony, from groovin’ opener "Body Knows Best" to the swaying, wry title track goodbye closer.  It often shows up in electro elements that add, but don’t overwhelm, such as "Body", restrained dark "Believe Me I Believe", indie-push "You Are Invisible", and small-but-ominous "Heart Stops".  Yet Marina is also able to pull out the sweet – "Notice Me" is endearing without being saccharine, while "Hot Button" is a tiptoe procession.  Plus, she’s also able to rock – garage-rock press of "Flinty" or rock push to penultimate "Speakeasy".

Anya Marina might still make more money off her songs being on TV than of any albums, but that’s just the way things are these days.  And Felony Flats shows that she’s not staying put on records.