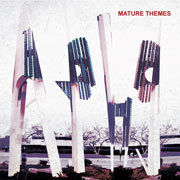 Equipped with a tape recorder and a vision he began his rise to stardom as a prolific bedroom artist.  Eventually a home-burned CD found its way to fellow musical genre benders Animal Collective, who saw the potential of the “rock ‘n’ roller from Beverly Hills” and signed him to their Paw Tracks label, releasing The Doldrums in 2004.  In 2010 Ariel Pink showed he was a force to be reckoned with when he released his breakthrough album, Before Today (QRO review).

Ariel Pink, or Ariel Marcus Rosenberg as some might know him, creates music derived from the defiant nature that has nurtured outsider musicians for generations, artists who unintentionally redefine musical styles and create room for new ones.  Who expand the social space by defying norms and categorization.  Every generation has these rebels and they don’t appear on The X-Factor or on American Idol, they come up through the cracks and emerge from badly lit bedrooms.  They’re driven by DIY spirit and the sheer love of creating.  This is what brought us Ariel Pink, an artist who has built his career on equal parts wizardry, talent and hard work.  A DIY superstar who with ingenuity and humility has created one of this year’s most beguiling albums.

Click here for QRO’s review of Ariel Pink’s Haunted Graffiti at The Zoo in Brisbane, QLD, Australia on March 8th, 2012

Mature Themes sees Ariel Pink moving towards a sharper sound than that of his lo-fidelity tape recorder days.  While the sound is still delicately handmade the methods are more sophisticated this time around.  The album radiates a lightheartedness that shows Pink at his sunniest and most playful mood.  The title, “Mature Themes”, already proposes an inside joke.  This mischievous attitude is a recurring feature throughout the album, forcing you to pay attention to every little detail in order to keep up.  It’s easy to be deceived by the playfulness of the album, but Ariel Pink never underestimates the listener’s ability to read between the lines.  You enter a world where the codes of communication are not instantly decipherable, making it all the more fascinating.

You are intrigued to get into the mindset of this singer who in one moment is conflicted about love only to refer to himself as a nymph at a discotheque in the next.  In “Schnitzel Boogie” he makes a thing like buying fast food feel like going to the circus.  The song, which features a telephone conversation with a restaurant, culminates in a mesmerizing chanting of “Schnitzel” that would appear senseless if anyone else tried to do it, in any other context.  No one but Ariel Pink could pull this off.

It’s this wide-eyed approach that allows him to keep you entertained and on your toes at the same time.  While humour is a strong ingredient in the mix you will be surprised by the sincerity and seriousness with which he manages his eccentricity.  Just when you think you have him figured out he surprises you with his balancing between the obscure and the conventional.  The secret lies in his song making abilities, which become especially evident on a song like “Only In My Dreams”, a song that contains all the classic elements of ‘50s radio hit.  “Early Birds of Babylon”, “Driftwood” and “Farewell American Primitive” on the other hand all contain elements of ‘80s gothic, synth-pop and new wave.  It’s in the gray area where Ariel Pink is most comfortable.  He doesn’t make clear distinctions, be it between categories or centuries.  Mature Themes is an album that should be viewed for what it is; an abstract work of art, a prism through which pop culture glistens in vibrant colours.

In Ariel Pink-land you’re allowed – even encouraged – to let your mind wander as far as possible.  Whether or not his music is accessible to you, it will make you shred your own set of presupposed expectations of how music should sound.  This is why Ariel Pink is so important, why he will keep pushing musical boundaries, while we’re busy trying to figure out if he’s joking or not.

MP3 Stream: “Only In My Dreams“