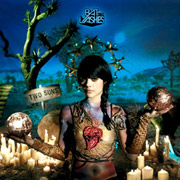 Two Suns was artist Bat For Lashes’ follow up to her 2006 album Fur and Gold, and it released on April 9th, 2009.  “Glass”, the first track on the record, almost feels like there’s too much going on.  The song begins with Natasha Khan singing nearly a cappella, though there is a faint hint of people talking in the background.  When the percussion and other instruments start, there is also the sound of honking car horns.  The song then transforms, encapsulating the essence of glass; the word is made music.  The twinkling bells juxtaposed with the pounding percussion illustrate the dual nature of glass: fragile yet sturdy.  Natasha Khan’s voice is the musical embodiment of light shining through a prism, engaging more than one sense.

The album’s hit single, “Daniel”, does not disappoint.  It’s the sort of song that makes one want to dance about in front of a mirror, while it is also emotion evoking and eloquent.  “Peace of Mind”, the following song, is twangy and features gospel singing over a heavy baseline.  It’s like listening to a choir in a thunderstorm.

Click here for photos of Bat For Lashes at Music Hall of Williamsburg in Brooklyn, NY on June 2nd, 2016 in the QRO Concert Photo Gallery

Click here for photos of Bat For Lashes at Nikon at Jones Beach Theater in Wantagh, NY on September 8th, 2013 in the QRO Concert Photo Gallery

Click here for photos of Bat For Lashes at 2013 Boston Calling Music Festival in Boston, MA in the QRO Concert Photo Gallery

Click here for photos of Bat For Lashes at Webster Hall in New York, NY on August 30th, 2013 in the QRO Concert Photo Gallery

Click here for QRO’s review of Bat For Lashes at Manchester Academy in Manchester, U.K. on October 14th, 2009

Click here for photos of Bat For Lashes at Great American Music Hall in San Francisco, CA on June 13th, 2009 in the QRO Concert Photo Gallery

“Siren’s Song” is easily the most beautiful song on the record.  The strong vocals surrounded by the pandemonium of different instruments make it addictive and soul shaking.  This is the song where Natasha Khan really reveals the beauty and sin of her blonde femme fatale alter ego, Pearl.  The end of the song is utterly chaotic, with strings, drums, synth, and strong vocals.

“Good Love” is the only real ‘love’ song on the album.  It’s slower and less percussion-heavy, and quite vocal.  It is a great display of Natasha’s range, and is redolent of PJ Harvey’s work with Nick Cave and the Bad Seeds.

The next song, “Two Planets” feels like Björk came in to give some lessons, and it works.  The song is upbeat; it’s hard not to move when listening to it.  The percussion really makes itself known in this song.  It feels like a combination of a Latin Mass and an Indian drum circle.  It also illustrates Khan’s eloquent lyricizing, which is typical of this album.

“Traveling Woman” is gorgeous, and is a perfect lead-in to the ending track, “The Big Sleep”.  This particular song gives new, beautiful meaning to a dirge; featuring Scott Walker, it is haunting.  The two vocalists dance around one another in a battle of perfectly achieved range.  It would be the ideal song to hear when you’re getting ready for the ‘big sleep’.

Overall, this is an exquisite album.  The combination of several instruments including piano, harpsichord, percussion, synth, and twinkling bells make this album positively genre-breaking.  Is it alternative?  Is it new age?  Is it pop?   This album, more so than Fur and Gold, makes it clear that Natasha Khan is an extremely talented musician.  Two Suns was nominated for this year’s Mercury Prize and ultimately did not make the cut.  This album created a new genre; hopefully one in which we will see other artists emerge.