This is a record as a whole for 'People Who Feel Like Us'.... 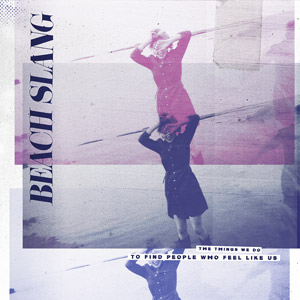 There’s a fine line in putting emotion into your rock. It always needs some, but too much and it can come off as overwrought. Not enough, and it can be leaden or crass. Beach Slang use just the right amount, and the right amount of fuzz, in their full-length debut, The Things We Do To Find People Who Feel Like Us.

Things has the feel of a young band embracing rock and what it means to them, with songs like “Noisy Heaven”, “I Break Guitars”, and “Young & Alive”. “Guitars” might be an anthem for indie-rock, while pieces such as “Alive” and “Hard Luck Kid” are young without being millennial myopic – one could see fans of the band still singing the songs, not ironically, twenty or thirty years later, like baby boomers still singing The Who or Gen Xers The Replacements (do you see the same being said about fun.’s “We Are Young”?).

Key to keeping Things from being as heavily earnest as its title is the layer of fuzz that Beach Slang have in the whole process. It can make the songs run together a bit, but this is a record as a whole for People Who Feel Like Us.