Ben Folds Five : The Sound of the Life of the Mind 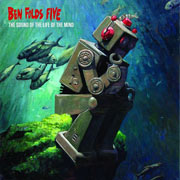 In the mid-to-late nineties, Ben Folds Five earned a place in a lot of music-lovers’ hearts as they mixed boppy piano tunes with tragic emotion (the latter exemplified best in their breakthrough single, “Brick”), before breaking up as Ben Folds and the other two went their separate ways.  Folds’ solo career stayed charming, if not as excellent, but in 2008 the group reunited to play in full their final (of only three) studio albums, 1999’s The Unauthorized Biography of Reinhold Messner.  That reunion has now prompted not only a full-fledged reunion tour, but also a brand-new BF5 record, The Sound of the Life of the Mind, which nicely picks up where they left off.

Admittedly cheerier than Messner (more in tune, attitude-wise, with Folds’ last solo release, 2008’s Way To Normal – QRO review), The Sound has a lot of Folds’ trademark bouncy piano, combined with relatively weightier lyrics, on such songs as single “Do It Anyway” (whose video features it’s own return, of Fraggle Rock), opener “Erase Me”, “Draw a Crowd”, and the title track (whose lyrics came from Folds’ sessions with writer Nick Hornby when they were making 2010’s pair-up, Lonely Avenue).  Folds has a knack for making jaunty tunes with catchy lyrics that are also interesting.

However, there isn’t a “Brick” on Sound (the saddest song, “Sky High”, is the only one written & sung by drummer Darren Jessee).  There are a few more orchestral tracks, like “On Being Frank” and “Away When You Were Here”, plus the soft and sweet closer “Thank You For Breaking My Heart”, but even the best of the sadder songs is the rather up for a wistful piece, “Hold That Thought”.

Ben Folds Five’s three records have impressively and rather surprisingly stood the test of time (if you can call just over a decade ‘the test of time’) – instead of being grating or shallow, they’re still as enjoyable as ever.  Time will only tell if The Sound of the Life of the Mind has that same kind of staying power, but it’s just great to have Ben Folds Five back!