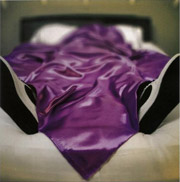 The Holladay brothers, Hays & Ryan (QRO interview), have been putting out interesting electronic music for years now, under a variety of pseudonyms, but grounded in more ‘traditional’ rock tellings, neither getting lost in the electronica mist, nor succumbing to lame electro-rock.  They found their greatest success as the core of the four-piece Epochs (QRO spotlight on), but now they’ve shorn their non-siblings to become Bluebrain, and jump further into electronic sounds on debut EP Cult Following.

For fans of The Epochs, there will be some dismay at this latest Holladay.  Especially missed is Epoch drummer Kotchy, who provided an essential base for The Epochs on their self-titled debut (QRO review).  Cult Following is much more straight-up electronica, but at least varies it up in there.  While it opens with the dark electro-goth haunt of "The Herdsman", and closes with the echo-removed "Ides", in between lays the tech-rhythm parties "Cult Following" & "Burgers and Fries", not to mention the smoother, cooler "Bring Out Your Dead".

If you never heard The Epochs, but like electronica, then Bluebrain is definitely for you.  And it’s been a while since we’ve heard anything from the brothers Holladay, so it’s really nice to have them back, under whatever alias.