Brant Bjork is one of rock and music’s biggest known unknowns.... 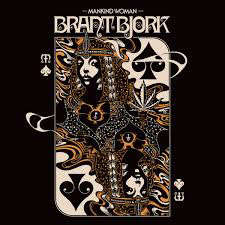 Brant Bjork is one of rock and music’s biggest known unknowns. He is a mystery wrapped in shiny cotton, that cotton is that he co-founded the first band which was truly recognized, rightly or wrongly, as ‘stoner rock.’ No, of course he is not new to music, even to solo records, but he plays in so many bands with so many different styles, one wonders how he ever began as a member of Kyuss.

Kyuss was a band that was so distinct and even iconic, and had his hard drumming that contributed at least half the ego and speed, that it is strange contrast to the mysterious, very hippy, and borderline hardcore bands he has contributed to and fronted since then.

While Mankind Woman is no departure from this, it seem so tragic that he is still relatively unknown, as the songs on here, from the rocking title track to the enigmatic “Charlie Gin” all bring something worth meditating to. Even “Brand New Old Times” and “1968” lend this to an understanding of hippy-happy punk, even if said tracks look back, as does the final number, the anti-war, “Nation of Indica”.

One of the more single worthy tracks, “Lazy Wizard”, is pure psychedelic hippy-rock, as is “Pisces”, but are there similarities to Kyuss (or the new version Vista Chino) on here as well? Not so much in the drums, but perhaps in songs like “Swagger and Sway”, “Nation of Indica”, “Mankind Woman” or “Chocolatize”.

The main thing here, though, is that more so than previously, Bjork relies on the similarity to Hendrix, Pink Floyd, and even Jefferson Airplane right from the start, but more overtly in “Lazy Wizards”, “Pretty Hairy”, “Brand New Old Times” and of course “Mankind Woman”.

Does all this add up to a great release in Mankind Woman, well yes, but perhaps even further from most popular music and from some of Brant Bjork’s previous bands, in a more relaxed and good way from the volatile Fu Manchu, but particularly from Kyuss and Vista Chino.