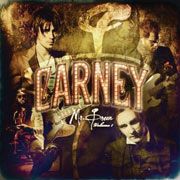 L.A. band Carney released their epic, vaudevillian rock sound to the world on their debut album entitled Mr. Green, Vol. 1.  The group consists of two brothers Reeve (vocals, guitar) and Zane Carney (guitar), along with drummer John Epcar and bassist Aiden Moore.  The band’s distinctive qualities are their complex and intelligent guitar arrangements and their lead singer’s distinctive, smooth yet howling vocal stylings.  From the vintage, rock groove of the opening "Love Me Chase Me", with its brash guitar interjections and extreme levels of dynamics, to the frantic, cabaret drama of "Amelie" to the intimate "Think of You", the guitar is central to the shifts in color, texture, and character of each track making for a varied musical journey through the whole album.  While lack of stylistic consistency may bother some listeners, there is at least never a dull moment.  The constants are the interesting melodies, and the cool, rock attitude of Reeve Carney’s singing.  He almost never resorts to a simple repetition of a melody if there’s a chance to expound and keep the listeners on their toes.

The album opens with a spacious, blues guitar tone and sounds so live that one might think that there may even be some snare noise, before the guitar is actually joined by the drums and bass to fill out the warm brooding texture.  The vague, story-song, title track may cause a yawn, especially as it drags on for five and a half minutes, but the strong melodic construction and interesting guitar parts are a constant here as well.  New life is breathed into the album with another song named after a fictional person but this time, a name dear to many, "Amelie".  This striking, frantic, French, jazz, rock song turns out to be only a detour before returning to more straight ahead rock in "There She Goes".  Although Carney goes more bubblegum here, it’s at least an amped-up, Freddie Mercury-flavored bubblegum with intense background vocals.  The transition out of that optimistic, love song is a mysterious music box interlude which then gives way to darker, more desperate yearnings in "Nothing Without You", followed by the massive, Led Zeppelin-esque blues of "Testify" to close out the album.

Carney has put together a great collection of songs for their first full-length album effort.  Expect a varied musical journey and some well crafted, feel good lyrics about all the old stand-bys like love and heartache.  Worth your time and money, Mr. Green, Vol. 1 comes from a band with an obviously deep well of musical talent.

MP3 Stream: "Nothing Without You"