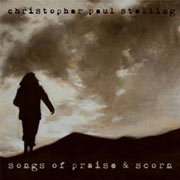 Somehow, alt-folk still keeps finding more.  The genre has boomed to the point where Justin Timberlake impersonated Bon Iver (QRO album review) on Saturday Night Live (QRO Indie on Late Night TV) – and felt the need to hold up an “I Heart Bon Iver” sign at the end of the show, just so he didn’t get hit with any backlash.  It would seem only natural for it to be overfull with retreads and pale imitations, especially given the low costs to entry for the style (just a voice & acoustic guitar).  We’ve already got too much garage-rock, chillwave, dub-step, etc., yet alt-folk continues to deliver quality artists like Christopher Paul Stelling with his debut Songs of Praise and Scorn.

Click here for photos of Christopher Paul Stelling at 2013 Savannah Stopover in Savannah, GA in the QRO Concert Photo Gallery

Click here for photos of Christopher Paul Stelling at Leatherfest at Rock Shop in Brooklyn, NY on October 3rd, 2010 in the QRO Concert Photo Gallery

The ten songs on Songs nicely move in different styles of alt-folk, from the fingerpicking blues-folk of opener “Mourning Train to Memphis” to the sweet and touching natural sounds of closer “King is Dead”.  Stelling is going to be better at some methods than others – the restraint to “The Ocean Stole My Love Away” and “Strange Darkness” only enhances their evocative power, while “King” is a little too sweet.  Songs could have used more of the carrying beauty exhibited on “Little Broken Birds”, while the darker and more ominous “Never Been There” doesn’t work as well.  And the ‘storm brewin’ out at sea’ nature to “Ghost Ship” didn’t need that as an actual lyric.

Christopher Paul Stelling has been the beneficiary of indefatigable promotion in New York thanks to publicist Spencer Scanlon and label honcho Johnny Leather, but he’s a deserving ‘passion project’, as it’s extra hard to get noticed in a world awash with alt-folk.  Even when it continues to produce quality like Songs of Praise and Scorn.