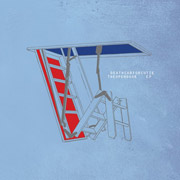 When Death Cab For Cutie broke through with Transatlanticism in 2003, and left longtime indie imprint Barsuk for major label Atlantic, many hipsters thought it would be the death of the much-beloved group, as they went mainstream and big-time.  However, while Death Cab have racked up big-name recognitions like Grammy noms and appearing on Saturday Night Live (not to mention singer/guitarist Benjamin Gibbard getting engaged to actress/singer Zooey Deschanel of She & Him – QRO album review), the band confounded the haters and doubters by delivering two of their best albums yet, 2005’s Plans and last year’s Narrow Stairs (QRO review).  And now the group keeps up another welcome trend from their past, putting out a sweet extra EP, The Open Door.

In their Barsuk days, Death Cab put out nice bonus EPs of mostly unreleased material like The Forbidden Love and The John Byrd, and The Open Door follows in that tradition (and not just in The three-word title…).  Only the final track is non-original, the stripped demo to Narrow Stairs’s “Talking Bird”, and it’s really the weakest.  The other four pieces are all welcome additions to the band’s extensive songbook, keeping the relatively upbeat nature of Stairs, but doing it all in a new alt-country-esque tone.  That is most notable on Open opener “Little Bribes”, but the sadder sway to single “A Diamond and a Tether” is more accepting than downcast, and “My Mirror Speaks” has alt-country hints amongst Death Cab’s signature procession.  Only “I Was a Loyal Lover” eschews these ways, being a fuzzier take on the band’s indie-march.

Since signing to Atlantic, Death Cab For Cutie have impressively managed to cherry-pick the best bits of their major label status (like their upcoming outdoor arena tour this summer, or Gibbard going from indie-geek to Pacific Northwest beefcake), while retaining everything you liked about them on Barsuk (even keeping a strong connection to their former label, from guitarist Chris Walla releasing his solo record there, Field Manual – QRO review – to inviting Barsuk’s Ra Ra Riot to join them on their massive tour – dates in QRO spotlight on).  The Open Door EP keeps up that tradition, by keeping up Death Cab’s EP tradition.