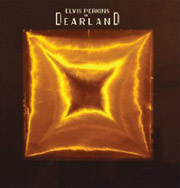 Elvis Perkins first became known for his remarkable and tragic family history: he’s son of actor Anthony Perkins (Norman Bates in Psycho), one of the first celebrities to die of complications from AIDS, and photographer Berry Berenson, who was aboard one of the planes that hit the Twin Towers on September 11th, 2001 (not to mention being descended from, among others, Giovanni Schiaparelli, the Italian astronomer who believed he discovered canals on Mars).  It all gave him a claim more than most have, despite his “loathing” of the term, to the ‘singer/songwriter’ title (and ‘Elvis’ is his birth name, not adopted, like a certain Mr. (not) Costello…).  His 2007 solo debut, Ash Wednesday, was affected by tragedy, yet didn’t traffic too deeply in stripped alt-folk, instead embracing country-time instrumentation that only grew more so when he toured with backing band Dearland (bassist Brigham Bough, guitarist/organist Wyndham Boylan-Garnett, and drummer Nick Kinsey).  Now comes Elvis Perkins In Dearland’s self-titled, first ‘true ensemble’ record, which keeps and expands that instrumentation, while giving a more varied, and thus, on average, sunnier, outlook.

Click here for QRO's review of Elvis Perkins In Dearland as part of Celebrate Brooklyn! at Prospect Park Bandshell in Brooklyn, NY on June 27th

Click here for QRO's review of Elvis Perkins In Dearland at Bowery Ballroom in New York, NY on December 7th, 2007

In general, the fun times on Dearland are stronger than the sad times, but there are exceptions at both ends, starting with the record’s starter, “Shampoo”.  The weary alt-country harmonica-loss has real twang, making it, alongside the penultimate “1 2 3 Goodbye”, the two finest sad songs on the album.  In fact, the grander look at the down home singer/songwriter “1 2 3” kind of feels like it should be the final track on the record, as opposed to the subsequent, actual finisher, “How’s Forever Been Baby”, whose slow piano/accordion work is a little too extended.  Other restrained work, whether keys-led like “Forever” and “Hours Last Stand”, or guitar-led the like the little ditty “Send My Fond Regards To Lonelyville” and swaying “Chains, Chains, Chains”, also go on a bit too long.

On the flip side, when Perkins & Dearland have fun, one can’t hope but the good times never end.  One of the high points of Dearland live shows (QRO review) is seeing Kinsey stepping out from behind the drum set and strapping on a giant bass drum, marching band style, and seeing him dance around the stage while beating it (between that, Boylan-Garnett’s accordion, and Bough’s upright bass, live 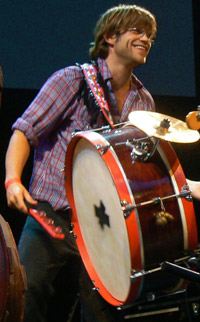 in concert, Dearland is just kinda cooler than Elvis…), and thankfully that sound, at least, is not missing from Dearland.  The lighter “Hey” first introduces the upbeat march-drum work, but then “I Heard Your Voice In Dresden” takes it to the next level by making it bigger and really combining it with a fun tempo and Perkins’ unique voice.  However, the standout of the standouts is, again like the live show, “Doomsday”; the natural successor to Wednesday’s own standout “May Day!” (QRO’s Twelve Songs for Twelve Months), nothing will put a smile on your face more as you head into the final days (that unfortunately seem to be coming right now…).

Only the fuzzy, lo-fi blues-piano “I’ll Be Arriving” feels a little weak among the upbeat songs on Dearland, a little muddled in its N’Orleans party-haunt.  If Perkins + Dearland’s more upbeat material is still a little more enjoyable than their downbeat, that might just be because Perkins did downbeat so well on Ash Wednesday, and its just so great to hear him & the band when they have a good time on Elvis Perkins In Dearland.