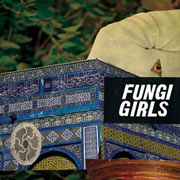 2011 witnessed a decisive up-tick in the volume of reverb-laden garage acts.  Even more than 2010, which was already a banner year for the genre.  Is the whistle still wet?  Or is the only garage left to scoop poop?  If you can suspend disbelief for about 30 minutes, Fungi Girls’ latest LP Some Easy Magic is worth a listen.

No need to convince the converted.  Diehard garage aficionados will immediately flock to the holy trinity of guitar, drums and bass, served up by the Fungi Girls with a laidback imprecision that has probably invited more surf pop comparisons than are really warranted.  The opening instrumental "Sabana Breeze" flaunts sandy vibrations, sure enough, but the rest of the record hits out a more straight-up punk register.  Punk – or slo-punk, if there is such a thing.  A punk 45 slowed down to 33 RPMs for a thoroughly syzzzurped experience.  Lead vocal Jacob Bruce sounds like a problem Valium user, which is precisely what Some Easy Magic needs to separate itself from the pack.  Songs like "Doldrums" and title track "Some Easy Magic" build on the sense of overheated paralysis.  It’s the feeling of waiting in a hot, un-air-conditioned car on a boiling Texas summer day while your friend runs into the local pharmacy to pick up his girlfriend’s birth control.  Interminable.

All in all, Fungi Girls make for a nice walk in the park.  Solid production from the Rux team elevates good tunes into more profound pop contemplations.  And the reverb effect, last but certainly not least, plays its starring role to thunderous applause, and several curtain calls – rightfully so.

Bleached – “Searching Through The Past”