Gracie and Rachel – Hello Weakness, You Make Me Strong

Welcome to the human whispering gallery that is Gracie and Rachel, baroque pop bromeliads in musical moonlight, and timbre twins who give you that very experience on 'Hello Weakness,... 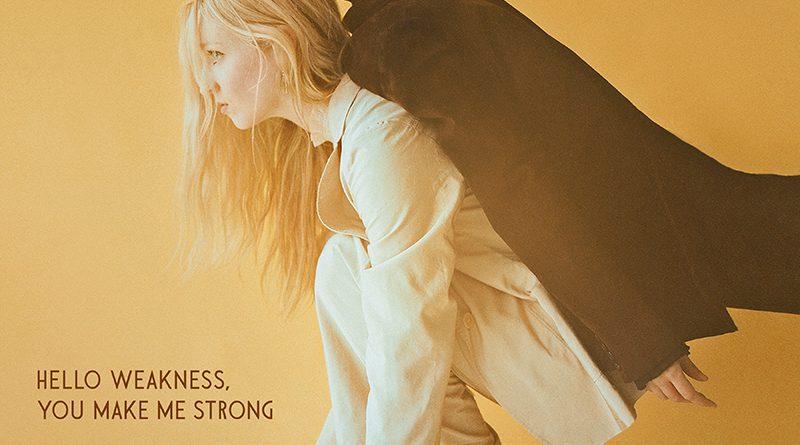 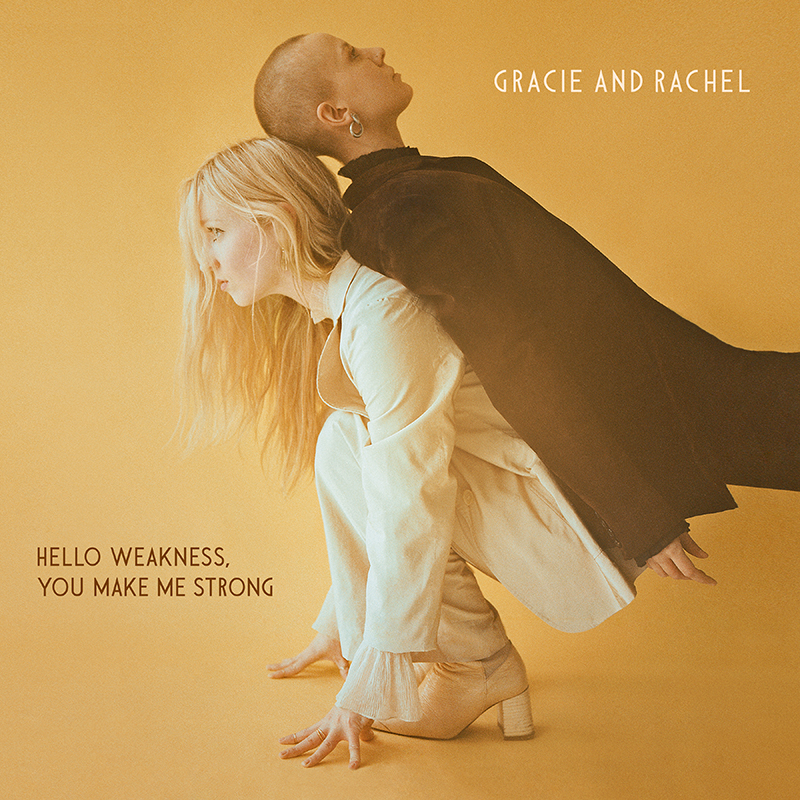 Mother Science and Brother Einstein would have it that everything in the observable universe moves through time at the speed of light. Einstein regarded the speed of light as a penumbral, absolute, and unvarying master clock. Looked at in this way, time exists as a function of light. Sound then – the measure of frequency and amplitude as it displaces air – becomes a function of time. Though sound, unlike light, cannot travel through a vacuum and requires a medium in order to move. The physical component of sound is simply the energy things produce when they vibrate. By the time you hear any sound, what you are listening to is simply a longitudinal energy wave making a journey. But what if you could hear sounds at/from their actual source, where no distance and no diffraction was necessary, because the medium was the origin and the origin was also a pair of dulcimer beings exchanging private frequencies at the speed of light? Welcome to the human whispering gallery that is Gracie and Rachel, baroque pop bromeliads in musical moonlight, and timbre twins who give you that very experience on Hello Weakness, You Make Me Strong, released on Ani DiFranco’s Righteous Babe Records.

All true sisters confer in a secret language, a common commerce known only to them, but perhaps most especially in unions where they do not share familial (but rather alpha) blood. The compressions and rarefactions of Gracie and Rachel have mulled to a semi-translucent signal over the course of more than a decade spent in tandem, the sirens having met as high schoolers in a modern dance class. Their Seder table built only for two ultimately unfurled into an unspoken agreement to become a band, the natural evolution of a shared spiritual dream. 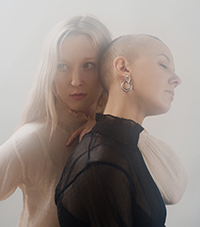 The kind of ambidextrous fission that in-glowed like incipient Lucite on their self-titled 2017 release revealed Gracie and Rachel to be of the same carat weight all the way from cortical synapses to comportment. Though these telepathic dryads have good-naturedly referred to themselves as a “piano-violin duo with boundary issues,” what they really are is a commotion of dithyrambic poetry – alloyed to dulciloquy and sounding akin to what you might imagine Loreena McKennitt and Joanna Newsom would do if they danced like unburned witches inside the same henge, then broadcast the whole affair to split-screen modernity. Each girl appears to hear, form, and manifest the player piano inside the other.

Having since surged Babefest with Dame DiFranco and migrated to Bushwick, their encaustic split light has shared the stage with the likes of Gloria Steinem and given way to their own candy-striped, dagger-eyed femi-ninja encomiums to empowerment – get thee to their hauntingly beautiful “HER” video at the speed of light for sure, no matter what gender or genitals you gallivant with. While being better than the part that’s written for you is the lot and lottery of every woman artist no matter the medium or time period, for women musicians you can add enforced outshining of the feckless, empirical fetters of men at studio soundboards to that daily demand. There’s a stomach-sickening attitude amongst many male producers that female song stylists are to be saccharinely regarded as primigravida or primipara, and thus to be cretinously coddled “for their own good” either way. All of this (laughably) without a moment’s recognition that, either way, these gamines and their gymnosperms are self-pollinating – no extra stereo sperm needed or wanted dude, thanks though. Such experiences lend endemic exigency to the way Hello Weakness, You Make Me Strong traffics in tropes of disruption, and the twists in transmission that occur in any human communication.

Though a woman should not have to be a gangland moll or a corsetiere to successfully state her own case in a world this old – especially with regard to the improvisational beautification process sustaining art that was formed in her own mind – the impolitic music industry so keen to routinely rook women out of autonomy (and often their marquee days as well) propelled Gracie and Rachel into something of a defensive posture when it came to their ownership of the outcome for the songs that became Hello Weakness, You Make Me Strong. Rachel had the weapons-grade determination to teach herself Ableton so that the girls might be free to bring forth all of their own aural apparitions and track the tessitura for every tune themselves, untampered and untamed.

Whether nuclear siblings like Prince Rama, spiritual ones like Indigo Girls, or identical twins like Tegan and Sara, women in pairs always seem to incise like a woodcut into our culture’s florid hallucinations. We have all sorts of places to go when we want sable savioresses of the girl duo variety. Veruca Salt for recondite abstraction, done in Drop D. Shakespeare’s Sister for staircases of downy feathers leading up to the temple of Isis. Wendy and Lisa for a larch-yellow clamor worthy of Prince’s magnetic epoch. First Aid Kit for Scandinavian folk implosions. Laverne and Shirley for god tier verisimilitude. Icona Pop when we want to drunk-dance to dessert music and not give a care about the calories. Strawberry Switchblade, when all else fails.

That said, the Siberian district wherein Gracie and Rachel take their listener has yet to be mapped before them. One of the most beckoning aspects of this music is that other auricular references are principally insufficient to describe it. Attempts to do so in words chiefly leaves one in the shabby duplex of entropy or the halfway house of vaporous impulse. Perceptible place references, rather than further sonic ones, are required to get a sense of how Hello Weakness, You Make Me Strong engulfs one in its coloratura chifforobe. Among the first such venue visuals that arrived to assist the ears of this Atlanta amanuensis were the sky-castle of Fantasia’s Childlike Empress in The Neverending Story, the Isle of Man, the oft-promulgated rose gardens of the Château de Malmaison, and Dante’s selva oscura (the dark wood). High-flown hallelujah aeries never truly departed once entered, all.

Gracie and Rachel’s video for “Underneath”:

Movies – gigantically cool movies – are also everywhere in this record. These spritely wonders have benignly bogarted the Bakelite badassery of Rock-n-Roll High School Forever’s Zillion Kisses. They have sweetly swiped Stina Nordenstam’s “Little Star” from Baz Luhrmann’s Romeo and Juliet and made polychoral Plexiglas out of it. The running themes of self-empowerment and self-knowing that hold sovereign sway over each of their ostraconic insights resolve into rippling rivulets of rhythm, vibrate at right angles to one another, then deliberately disapparate. Standout track “Underneath” is the prognostic lithograph of that transfixing tendency. Clandestinely filmed at various undisclosed locations in and around Neptune’s tidewater regions (and representing Gracie’s efficacious editing debut), this song and video finds the Lydian lasses putting a timestamp on emotional planetary systems that have attempted to ply and collate them. Singing of internal and external landscapes lost – and perhaps some only ever vocally visited before by the likes of Dolores O’Riordan – “Underneath” is a song for that moment when you decide to take a rooting interest in your own innermost heart.

Gracie and Rachel’s video for “Trust”:

Both the song and the video for “Trust” begin by a monochromatic river and rake up reminiscences of Richard Marx’s hallowed “Hazard” in optics and oracular essence. This treasure is analog way beyond the vintage television at its visual center, claiming twin-shadow choreography by the ladies and sounds painted with malachite. Having a telekinetic exomoon for a best friend and band sister does not guarantee total avoidance of misdirects, however, and making photometric sounds as a practice with someone does not necessarily mean that you can forever freely say what you want to that person. Thus, “Speak” is Rachel’s wordless conflict resolution anthem to Gracie – a Hepburnian drawl of a song wherein squalls of Enya-like harmonies form cloud trifles inside sprays of ballast synths gleaming like tiny rapiers.

Gracie and Rachel’s video for “Ideas”:

“Ideas” is a perforated and tussive wonderland of whorls and eddies. It sounds like it’s taking place in the upper gambles of Imogen Heap’s soul-splitting “Hide and Seek.” “Floating” is a diaphanous dream, all watercress and nectarines, yet embattled and buoyant in the way of a cracked socialite. Every song on this record brandishes a one-word title. They are statements. Metered monuments. Whole notes. Little rainbow stalactites, each proclaiming its own kind of point across the Cavern de la Clef that could be said to represent all musical modes, the arc of femininity, and the mediumship required to be a real artist.

Hello Weakness, You Make Me Strong is a record about radii, specifically those of the available airspace in amaranthine affections, and the turnstiles between tones, twins, and silent telegrams. Gracie and Rachel themselves stand for the loci determining so much in friendships, sisterhoods, romantic pairings, and all other immortal interactions. Before ever having spoken to the extroverted Emily Dickinson that is galactic Gracie, or the radical remix of a 14th-century madrigal that is radiant Rachel, these virtuosic valentines had long since put me in mind of another Emily altogether. It was elven Emily Brontë who first knew something stellar of such kinship stations, having served as semiconductor to the creativity of her own sisters many moons before Gracie, Rachel, Enya, Loreena, Imogen, or Dolores could begin to call their shared octaves down from the heavens. Book lovers take heed: Miss Brontë would have had this album on a loop could she have but brought a phonograph and a time machine to the Yorkshire moors with her each morning. For certain it sounds like what the gorse must sing once all the people (including dear, feral Emily) go home for the night. For the clime-minded, Hello Weakness, You Make Me Strong is a rain record, full of sounds made by silkworms, no synthetics in sight. Gracie and Rachel are in possession of a dual Doppler radar gifted by Artemis, and the music is waveform weather to make you kip down with a Kir Royale in one hand and a tome on asteroseismology in the other. 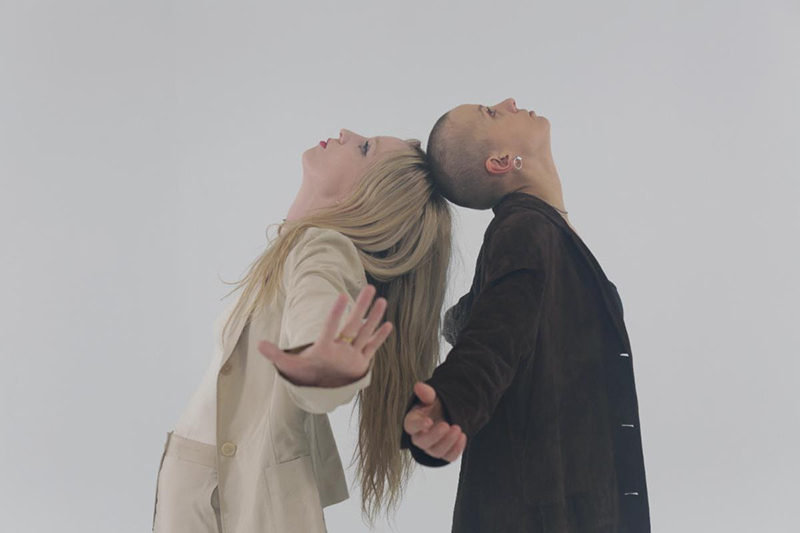