Grant Hart is one of the most idiosyncratic figures in alternative rock.... 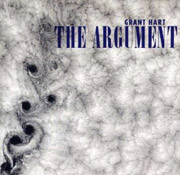 Grant Hart is one of the most idiosyncratic figures in alternative rock.  As drummer and one-half of the vocals/songwriting in iconic eighties punk act Hüsker Dü (QRO spotlight on), he introduced melody to punk rock – and had songs like “Books About UFOs”.  After the band’s acrimonious break-up, he did both solo material and in his own band, Nova Mob – the latter are best remembered for their concept album about both the volcanic destruction of Pompeii and the Apollo Space Program, The Last Days of Pompeii.  Hart didn’t release much of his own material in this century/millennium until 2009’s Hot Wax (QRO review), where he worked with the also idiosyncratic act, Godspeed You! Black Emperor.  And now comes The Argument – a twenty-track record that’s also another double-concept album, about John Milton’s Paradise Lost and Hart’s late friend & legendary author William S. Burroughs, which manages to make both subjects seem cheery.

Click here for photos of Grant Hart at SXSW 2012 in Austin, TX in the QRO Concert Photo Gallery

The Paradise Lost aspect of The Argument is much more clearly evident than the Burroughs side – but it is the counter-culture author’s twisted view that lays beneath the album, as Hart mostly sings from the point of view of the various actors in Milton’s epic, from the fall of “Morningstar” to Adam & Eve’s “Run For the Wilderness”.  What’s most interesting is how Hart makes the fall of angels & the fall of man sound so cheery: like introducing melody to punk, he makes catchy ditties out of Lucifer’s defeated rebellion (“Morningstar”), the self-righteousness of God and His angels (“Glorious”), and even the snake giving the Fruit of Knowledge (the clever little “Underneath the Apple Tree”).  There are some songs that play the epic tragic (“Awake, Arise”, “I Am Death”, “The Argument”), though they don’t quite work as well.  Better are the faster pieces, especially the galloping “Letting Me Out” (another from the point of view of Hell) and the gotta “Run For the Wilderness”.

With twenty songs, there are gonna be some misses – “Golden Chain” doesn’t make sense and is too slow to be special, while “Shine, Shine, Shine” is simplistic.  But from the processional opening speech “Out of Chaos” to the wry finish “For Those Too High Aspiring”, the ever-unusual Grant Hart manages to square the pentagram.

Grant Hart – Letting Me Out