<img src="https://www.qromag.com/wp-content/uploads/2009/04/greatlakeswimmerslost.jpg" alt=" " />Get your sweet-sounding seventies alt-folk from someone who's not new to the game, like the still-getting-better Great Lake Swimmers. ... 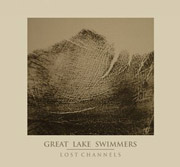 Sweet-sounding seventies alt-country/folk has been hitting it seriously big in the last year or two, with the success of such acts as Fleet Foxes (QRO album review), Blitzen Trapper (QRO live review), and Dr. Dog (QRO album review) – unfortunately, while some of those bands deserve their acclaim and more (like Blitzen Trapper), others get lost in the sweetness, coming off dull and overrated (like those other two…).  Thankfully, Canada’s Tony Dekker has been at this game for a while now as Great Lake Swimmers, and his latest, Lost Channels, is maybe his greatest – though does tail off at the end.

Dekker recorded Lost Channels at various spots in and around the St. Lawrence River’s Thousand Islands; the album is named after a place in the islands where a recon boat from a British warship was lost in 1760.  However, quality-wise, Channels would be too frontloaded not to tip over at sea – it’s best tracks come early on, starting with opener “Palmistry”, whose grand, sweet-sounding beauty is not too affected (or wussy), just sweet.  Dekker brings a bit more rock than on his last, 2007’s Ongiara, with single “Pulling On a Line” and “She Comes To Me In Dreams”, but Great Lake Swimmers still hew mostly to the stripped alt-folk harmonies of previous work, and it is in these where the imbalance is most clear.  Early tracks like “Everything Is Moving So Fast”, “Concrete Heart”, and “The Chorus In the Underground” are songs that would actually earn Fleet Foxes’ gross over-praise – “Concrete” in particular, as it was a song Dekker was commissioned (i.e., paid…) to write about Toronto architecture, and it’s way better than any such-designed work should be.

But after the sub-minute bells clanging “Singer Castle Bells”, the final third of Lost Channels really slips.  The choral harmony of “Stealing Tomorrow” is decent, but not at the levels of earlier songs, and the sweet alt-country press of “Still” can’t hold the backend up all on its own, thanks to the record’s final three tracks, “New Light”, “River’s Edge”, and “Unison Falling Into Harmony”.  The choral strip-hymn “Light” unfortunately veers into boring hymnals (like, yep, Fleet Foxes…), and the stripped alt-folk of the final two don’t have enough of a spark (and should have been spread further apart on the CD – though this does make skipping these three easier…).

While alt-mainstream America (really more the mainstream) has just been discovering – or rather, rediscovering – the sweet sounds of seventies alt-country, Tony Dekker’s been doing it for a while now, both on his own (QRO solo soundtrack review) and with his backing band as Great Lake Swimmers.  And if that means he’s missed out on some of the praise he deserves (maybe why he moved from Canada’s alt-folk imprint (weewerk) to the larger, oddly similarly-titled Nettwerk), it also means he doesn’t suffer from a backlash.  Lost Channels stays in the water a bit too long, but has more than enough going for it to set sail.