Green Day – Father of All Motherfuckers

We get the enjoyable, but limited, 'Father of All Motherfuckers'.... 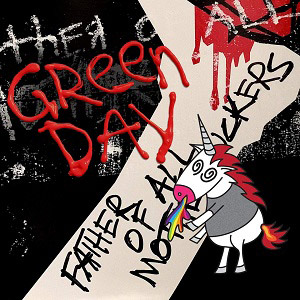 Click here for QRO’s review of Green Day at Moda Center in Portland, OR on August 2nd, 2017

Green Day long ago grew from their snotty-punk nineties origins to epic agit-punk during George W. Bush’s administration, even releasing three records in 2012, ¡Uno! (QRO review), ¡Dos! (QRO review), and ¡Tré! (QRO review), yet more recently seemed to have run out of steam. They’re old guys now, and today’s rebels are listening to synthesizers (and aren’t old white men). But surely the horrific Trump Administration would restart their revolution? Instead, we get the enjoyable, but limited, Father of All Motherfuckers.

Clocking in at under a half-hour, their shortest album to-date, Father is hardly American Idiot 2.0. Instead, it’s got some catchy pop-punk tracks that can do well as just catchy pop-punks tracks. “Meet Me On the Roof” is perhaps Green Day’s most dance floor-ready piece ever, and “Fire, Ready, Aim” is as active as The Hives. While not ambitious, songs like “I Was a Teenager Teenager” do hook in your ear.

It was probably too much to expect Green Day to take on Orange Head, and one didn’t really need them to – there’s hardly a lack of political music today – plus they were never going to repeat their decades-old breakthrough. So just enjoy Father of All Motherfuckers for what it is, not what it isn’t.