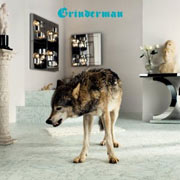 Grinderman is Nick Cave’s unapologetically crass, coarse and carnivorous side-project featuring who one can only assume to be the more adventurous handful of Bad Seeds (Warren Ellis, Martin P. Casey, and Jim Sclavunos, respectively).  Grinderman 2, the sophomore effort by this troupe, is as much a tour-de-force as anything in their collective and singular catalog.  As expected, it is noisy, violent and visceral.  What it is not is juvenile.  This comes as a mild surprise from a band whose lead single on their first album was the blue balls anthem, "No Pussy Blues".  Nick Cave & The Bad Seeds, ahem, Grinderman enthusiasts all knew the group had it in them to crank up the hostility in poetic fashion, and in this album we revel in the realization of it.

In the early stages of recording the set of songs, Cave was noted as saying he took the band a little more seriously this time around.  It shows.  The visceral energy in songs like the opener "Mickey Mouse and The Goodbye Man", "Worm Tamer", and the closing "Bellringer Blues" are a pleasant assault on the ears.  Never one to shy away from plundering the depths of debauchery, the band tackles themes such as death, betrayal, rape, murder, and hedonism deftly in the confines of 41 minutes and with a deference to vulgarity.

Click here for photos of Grinderman at 2011 All Tomorrow’s Parties at Alexandra Palace in London, U.K. in the QRO Concert Photo Gallery

Click here for photos of Grinderman at 2011 Primavera Sound Festival in Barcelona, Spain in the QRO Concert Photo Gallery

Click here for photos of Grinderman at House of Blues in Boston, MA on November 13th, 2010 in the QRO Concert Photo Gallery

However, between the thump and the thrash of Grinderman 2, there are brief moments of lucidity and a nagging suspicion that something confusingly artistic is at play.  This kind of musical squalor should not make sense or should not appeal to the senses the way it does.  Tried and tested, Cave and his Seeds triumph in raising a poetic poltergeist out of this seedy, slimy, viscous syncopated concoction.

The sparse and minimalist strums and delicate, yet suggestive, lyrics to "What I Know" balances out the feral ruckus of previous songs.  The song serves as a palate cleanser as well as spot to take a breath before the rest of the Hurricane Grinderman onslaught.  As an eye to the storm, Cave composes from the point of view of a character one assumes to be the aforementioned heathen child.  However, the insights this character espouses are beautifully whispered and dealt with maturity beyond the years of the implied narrator.  We have a nubile Prufrock here not pondering what to do next but calmly embracing what life has to offer, the beautiful and the depraved, and welcoming it all to her bed.  While definitely not Cave’s first foray into suggestive eroticism, it is his most demure.  The song suggests an insatiable and seductive appetite for life in its hushed tones.

"Palaces of Montezuma" charts territory similar to Cave’s other band.  An unabashed love song with charming lyrical twists and those tried and tested major chords dousing the listener with romantic dashes of saccharine melody.  Albeit, it does take some balls and a keen command of the English language to write line as good as, "the spinal cord of JFK wrapped up in Marilyn Monroe’s negligee."

The second Grinderman album is an overall better listening experience than the first.  Gone are the uneasy vulgar squalls and squeamishly dull lyrics that seemed beneath such talent.  Sound and fury with no point is mundane and throwaway at best.  Grinderman 2, on the other hand, has the unifying themes both sonically and lyrically to surpass mediocrity and reach the plateau of excellence.  With this release the band finds perfect pitch and stride.  And it also fucking rocks!

The New Pornographers : Live in NYC