It’s not easy being ridiculously prolific, but Robert Pollard can make it look so.... 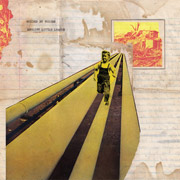 It’s not easy being ridiculously prolific, but Robert Pollard can make it look so, and has been doing so for a ridiculous number of years, first heading up Guided By Voices from the late eighties into this century/millennium, then in various solo projects, and now once again in GBV, who reunited the ‘classic’ 1993-96 line-up a few years ago.  There were three Guided full-lengths last year, and now comes yet another one, English Little League.  However, the wear is starting to show, as much of it is the lo-fi GBV you’ve heard many times before – save when guitarist Tobin Sprout channels some neo-Beatles psych.

At ‘only’ seventeen tracks (2012’s releases averaged twenty…), League still has all the Guided By Voices lo-fi hallmarks.  There’s the slow, sad carry of “Xeno Pariah”, “Send To Celeste (And The Cosmic Athletes)”, and “Biographer Seahorse”.  There’s the staccato lo-fi in “Trashcan Full of Nails” and “Taciturn Caves”.  There’s even the straightforward GBV lo-fi with “Know Me As Heavy” and “Crybaby 4-Star Hotel”.  Yet it all rings very similar to anyone who’s heard any of Pollard before.

The only really new element to English is when Sprout writes material, and brings some late period Beatles into the mix.  There are the reverbed vocals of “Islands (She Talks In Rainbows)”, lower-key “Quiet Game”, and Beatlesque organs of “The Sudden Death of Epstein’s Ways”.

English Little League still has some good, even pretty good ‘regular’ GBV songs, like the carry to “Biographer” or the brighter “Flunky Minnows” following.  But perhaps Robert Pollard needs to take a breath.