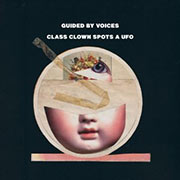 Nothing stops the indefatigable prolific nature of Robert Pollard.  The end of the original line-up of his Guided by Voices in 1994 didn’t, nor did him retiring the GBV moniker near the start of this century/millennium.  The ‘classic line-up’ reunion in 2010 seemed to bring a pause, as he was busy with the reunion tour, but now comes GBV’s second record of 2012 – second of three – Class Clown Spots a UFO.

Like Let’s Go Eat the Factory (QRO review) earlier this year, Class Clown has twenty-one tracks, but many are under a minute, and average fewer than two.  And like Factory, it meanders all over the place, from the dark (and meandering) opener “He Rises! Our Union Bellboy” to the building fuzz of closer “No Transmission”.  There’s also catchy ditties (“Class Clown Spots a UFO”), sweet sway (“Keep It In Motion”), even sixties sway (“They and Them”), and sad acoustic (“Fly Baby”).  Not all of it is necessary, and it does sometimes take away from GBV’s core strength of lo-fi fuzz-rock (“Chain To the Moon”, “Roll the Dice, Kick the Head”, “Jon the Croc”) that they were doing long before anyone in Brooklyn, but it can also provide a nice break.

Guided by Voices have another record planned for later this year – plus Robert Pollard has a solo album out next month, Jack Sells the Cow.  Maybe everything thrown against the wall doesn’t stick, and maybe you can’t quite keep up with it all, but nothing will stop Robert Pollard & Guided by Voices.