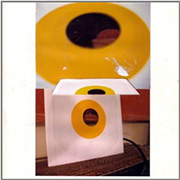 Guided By Voices began as one of the quintessential ‘college rock’ bands of the late eighties/early nineties, and reached their peak as such in the mid-nineties, but after the departure of guitarist Tim Sprout & others, it became basically a vehicle for singer/songwriter Robert Pollard – to the point where Pollard retired the GBV moniker and went completely solo (QRO album review), like many other eighties & nineties alt-icons (think Dinosaur Jr.’s J Mascis – QRO album review).  But the 1993-1996 ‘classic line-up’ reunited, first just for the twenty-first anniversary celebration of original label Matador, then for more reunion shows, and now have put out the first GBV album in over five years, and the first with the ‘classic line-up’ in over fifteen, Let’s Go Eat the Factory.

Though it’s the ‘classic line-up’, Pollard still takes the lead, and Factory bears his trademarks – lo-fi and overstuffed with material from the ultra-prolific artist.  Still, it harkens back towards the ‘classic’ GBV in being truly overstuffed at twenty-one songs – which average at just less than two minutes.  It also meanders more than later-period Pollard, from melody to rock to more.  This all does mean that there are some tracks that could have been removed – certainly the sort of-talking over sort of-psych “The Big Hat and Toy Show” (has a bit of a Lulu-ness to it – QRO album review), or the backwards-sounding “Old Bones”.  And amidst all the short songs, pieces can struggle to stand out, even with the variety – penultimate “Go Rolling Home” and “The Room Taking Shape” virtually merge together (though only make just over a minute together).  Yet there are standouts, like the relaxed/resigned touch of “Doughnut for a Snowman” and garage lo-fi with melody underpinning single “The Unsinkable Fats Domino”.

Singer/songwriters getting their old band back together is tricky, as the main man has to give up some of the creative control he’d spent so long accumulating, while the rest of the band have to dive back in knowing that they’ll never be the frontman.  And they’re forever in the shadow of their late greats.  It’s best taken slowly, but can work – Dinosaur Jr. is the case in point, going from original line-up reuniting to play the re-release of old material to making some great new albums (QRO review).  GBV have pulled off the same feat in another good slow-motion reunion.