It Started As a Joke

From 2008 to 2017, veteran alt-comedian Eugene Mirman held his own ‘Eugene Mirman Comedy Festival’ in Brooklyn.... 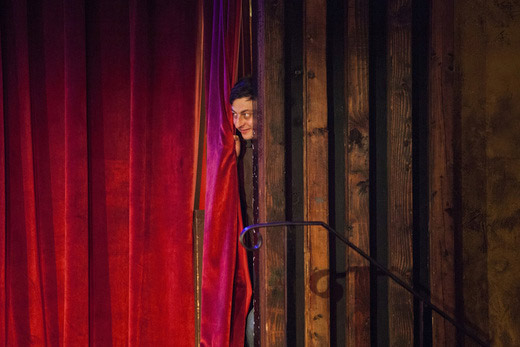 From 2008 to 2017, veteran alt-comedian Eugene Mirman held his own ‘Eugene Mirman Comedy Festival’ in Brooklyn. Emerging out of such comedic showcases of his as ‘Invite Them Up’, the festival spotlighted the New York alt-comedy scene, not in Midtown comedy clubs, but Brooklyn rock venues Bell House (QRO venue review) and Union Hall (QRO venue review). Over its ten-year run, the festival had everyone from new comedians to big-draw names, as well as ranging from StarTalk with Neil deGrasse Tyson (QRO recap) to ‘The Drunk Show’ with Ira Glass (QRO recap), even musicians such as Andrew Bird (QRO photos) and Robyn Hitchcock (QRO photos). And now it, and Eugene Mirman, are celebrated in the hilarious and touching documentary, It Started As a Joke.

That title comes from that the festival was begun as a joke by Mirman, “What if we made a festival making fun of other festivals?” Joke highlights in particular the odd comedy that made the festival so singular, for the type of comic who thrives in non-traditional settings. Instead of sponsors, there were line-ups like ‘The Comedians of Law & Order’. There were themes like ‘The Drunk Show’, where the comedians did games to progressively get drunker – and famed NPR host Ira Glass blacked out. Instead of regular jokes, there were stories. And when Kristen Schaal was leaving New York for Los Angeles (another, separate line-up was ‘Comedians We Hope Don’t Move To L.A., But We Hear There’s More Work Out There’), Mirman had none other than Jon Hamm, fresh off an Emmy nomination, serenade Schaal dressed as the Big Apple (QRO photos).

But the documentary is also specifically about Eugene Mirman. There’s his first joke (about suicide), grainy early videos, appearing on Conan, etc. But the heart of the film is his family, his marriage to set decorator Katie Westfall Tharp, and having their son, Oliver. Tragically, Tharp came down with cancer for much of their relationship, including the wedding and having their son via surrogacy (the documentary opens with Mirman joking about being recognized at the sperm bank). There are numerous interviews with her, about how comedy helped them cope, including Mirman making comedy out of it at the final EMCF performance (to boot, Gaffigan & Glaser also do comedy about loved ones with cancer at that show, and Goldthwait even throws in jokes about his best friend Robin Williams and suicide). It is not only unexpectedly touching, but also impressively does not take away from the comedy, but makes the laughs all the more meaningful.

There is a ‘one year later’ follow-up with Mirman & Tharp, where she mentions that their son will be able to see this documentary, even if he can’t remember her. And it ends with the devastating news that she died in early 2020. Throughout the documentary, the viewer began hoping more & more that she would make it, that her being alive in 2018, alive in 2019, meant that she might still be alive today.

It Started As a Joke manages to be both a documentary about a festival, a biography of a comedian, a collection of comics joking around, and a testament to a family. As Jo Firestone says, choking up about the festival’s end, “It started as a joke, but it’s a pretty good joke.”